Lights in the Ozarks

I was chatting with a good friend and long-time reader of Skeptophilia about the difficulties of finding topics to write about six days a week, and right off the bat she came up with one I'd never heard of.

She's another novelist, so I probably shouldn't have been surprised that she had heard about local legends in the Ozarks, near her home in northwestern Arkansas.  Her name is K. D. McCrite -- she's a versatile and creative writer, writing children's books, romances, and cozy mysteries, but also (under her pen name Ava Norwood) writes domestic thrillers that'd knock your socks off.

"Have you ever heard of the Joplin Spook Lights?" K. D. asked.

Well, it sounded a bit like a minor league baseball team, but I told her I hadn't.

"It's actually not in Joplin that it happens," she told me.  "It's across the border into Oklahoma, near Quapaw.  But lots of people have seen them.  Lights floating in the sky.  They were reported long before there were any cars and airplanes, so whatever they are, they don't seem to be that."

I was intrigued, of course, and she did a little digging and found some references for me.  It's a pretty peculiar phenomenon, whatever it is.

It was allegedly first noticed by Native Americans during the Trail of Tears, but just about every time something like this comes up you hear that the "Native Americans had legends" corroborating it, so I'm not inclined to give that a lot of credence.  But after that, things get pretty weird, and way harder to dismiss out of hand.

In 1881, a publication came out called The Ozark Spook Light claiming it had been seen repeatedly by locals.  It's a ball of light that hovers over the road, and that it "sways from side to side, like a lantern being carried by some invisible force."  It apparently can be seen on most any dark night, seems impervious to wind and rain, and has even been studied by the Army Corps of Engineers -- still leaving us without an explanation. 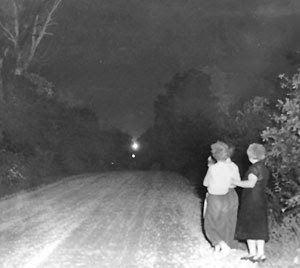 Initially I thought it might be ball lightning, but on further research it doesn't seem to fit with the descriptions.  Ball lightning -- itself a verified but unexplained phenomenon -- has several common characteristics, which include sizzling discharge when it nears a metal object, and a (usually loud) explosive finish.

The Joplin Spook Lights, on the other hand, are silent.  They don't seem to be electrical in nature, although that's speculation.  Some have linked the phenomenon to the New Madrid Fault -- one of the only potentially dangerous faults in the middle of the continent -- which in 1811 and 1812 suffered a series of earthquakes that changed the course of the Mississippi River, and which if they occurred today, would have flattened every town within a hundred mile radius.  But that doesn't make a lot of sense to me, because the New Madrid Fault is on the other side of the state, over five hundred kilometers away.

If the New Madrid Fault is causing lights in the sky in Quapaw, Oklahoma, the skies over the town of New Madrid itself should look like Fourth of July fireworks show.

But whatever they are, the Spook Lights are a completely local phenomenon.  K. D. put me in touch with a friend of hers who lives near where they're regularly seen, and in fact, has seen them herself, as had her husband.  Here's what she had to say:


I’ve seen it a handful of times over the years.  My first husband saw it up close and personal when he was a teenager.  He said it was a common pastime to hang out there.  I believe it must have been more active and brighter then, which would have been late forties, early fifties, if I’m figuring the time right.

He said he sat on the hood of his car and read a comic book from the light it projected.  It would come up close and sometimes bounce on the top of the cars in front of him.  He said it would split into two, three, four lights, and some were different colors.  Not bright but subtly different shades.  I imagined it like a pale prism.  I don’t know if that’s what it was.  I think he did say it would sometimes be a pale red.

My own experiences were less exciting but they did give me chills a time or two.  I have seen it divide and bounce in the tree tops.  It has seemed to diminish in size and brightness over the years.  I haven’t heard of anyone seeing it in years but maybe people have lost interest.  Too much else to do these days.  The last time I was there was around 2000, 2001.  My husband and I went down with some friends, but that time we didn’t see it at all.

Pretty creepy stuff.  I don't know that if I'd been there and seen spectral lights bouncing off the hoods of cars, I would have been calm enough to sit there and read a comic book.  Although I'm a skeptic and a scientist, I'm also a great big coward, and I suspect if I were on a lonely country road at night and saw weird lights in the sky, I'd either faint or else wet my pants.


Be that as it may, the lights are still seen today (although perhaps less frequently, as K. D.'s friend mentioned).  In 2016, three friends went investigating, and caught the Spook Lights on film (they call them the "Hornet Spook Lights," after the nearby town of Hornet, Missouri, six miles southwest of Joplin, but it's the same local phenomenon by a different name).  The video they took is strangely convincing -- if you're as impatient as I am, though, you might want to advance it to 9:30 and skip all the introductory conversation.  But the people filming it point out other flashes as distant billboard lights or car headlights, and what they say are the Spook Lights are definitely something different.  My feeling after watching the video is that whatever the three guys captured on video, it wasn't some kind of elaborate hoax.

In any case, the Spook Lights remain unexplained.  Apparently they're one of the best-documented "lights in the sky" in the world, which makes me wonder why I hadn't run across it till now.  I'd still put money on there being a natural explanation, but despite investigation, no one -- including the Army Corps of Engineers -- has been able to figure out what it might be.

So thanks to K. D. and her friend for putting me onto this.  It's certainly a curious phenomenon.  I think maybe next time I'm in the Ozarks (I go there every year for my publisher's annual authors' retreat), I might just head up to Quapaw and see what I can see.  I'll have my camera at the ready, and will certainly report anything I see here.

I'll also have a change of underwear at the ready.  You can't be too careful.