The phrase "the vastness of interstellar space" gets thrown around a lot, but it's hard for a lot of us even to wrap our brains around how vast it is.

Here's an analogy that will give you a feeling for it.  Imagine that the Sun (which is about 1.4 million kilometers in diameter) is shrunk down to the size of a marble, with a diameter of about 1.5 centimeters.

The Earth would be about the size of a grain of fine sand, and would be roughly a meter and a half away.  Jupiter would be eleven times larger in diameter, and over five times farther away.

You ready?  The closest star to the Sun, Proxima Centauri, would be a somewhat smaller marble, over four hundred kilometers away.  So if the marble-Sun was located in my living room, here in upstate New York, the marble-Proxima-Centauri would be somewhere around Baltimore, Maryland.

Everything in between is empty space.

I remember when I first watched the brilliant short video Powers of Ten (which, if you haven't seen it, take ten minutes and watch -- you won't be sorry) when I was perhaps seventeen years old, and I recall vividly being blown away by the magnitude of it all -- and how once you're even in the outer reaches of our own Solar System, the Sun has diminished in brightness until it looks like nothing more impressive than an unusually bright point of light.  You get very much farther out, and the Sun itself is seen to be a rather dim and ordinary star, swallowed up in the diamonds-on-black-velvet of the perpetually dark interstellar sky.

This whole mind-boggling topic comes up because of an analysis of a comet that zipped through the Solar System late last year.  Comet 2I/Borisov, which never got closer than the orbit of Mars nor bright enough to see without a telescope, didn't make much of an impact on the layperson -- if they heard about it at all, it was on the level of "hey, there's a comet out there," but the less-than-spectacular show it put on from Earth meant that most people probably never even heard about it.

But 2I/Borisov was hiding something pretty spectacular, something that was the subject of two papers in the journal Nature Astronomy this week.  The comet had a chemistry so peculiar that it seems as if it was formed in another star system -- then made its way across interstellar space to make one and only one slingshot path around our Sun, never to be seen again. 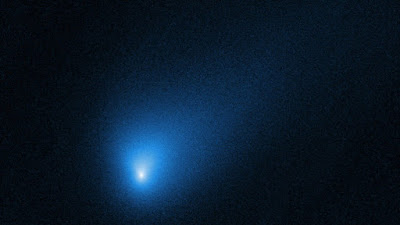 The tipoff was that the comet had an unusually high amount of carbon monoxide -- three times higher than had ever been observed in a "local" comet.  Here's what the first paper, by Martin A Cordiner (astrochemist at NASA's Goddard Space Flight Center) et al., had to say:


Comets spend most of their lives at large distances from any star, during which time their interior compositions remain relatively unaltered.  Cometary observations can therefore provide direct insight into the chemistry that occurred during their birth at the time of planet formation.  To date, there have been no confirmed observations of parent volatiles (gases released directly from the nucleus) of a comet from any planetary system other than our own...  2I/Borisov must have formed in a relatively CO-rich environment—probably beyond the CO ice-line in the very cold, outer regions of a distant protoplanetary accretion disk, as part of a population of small icy bodies analogous to our Solar System’s own proto-Kuiper belt.

For what it's worth, the CO ice-line -- the boundary between where carbon monoxide can exist as a solid and where it volatilizes into a gas -- occurs at a temperature of about 25 degrees above absolute zero.  So "very cold" doesn't begin to describe it.

The second paper, by Dennis Bodowitz (planetary scientist at Auburn University) et al., describes what was so unusual about it:


Interstellar comets offer direct samples of volatiles from distant protoplanetary disks.  2I/Borisov is the first notably active interstellar comet discovered in our Solar System.  Comets are condensed samples of the gas, ice and dust that were in a star’s protoplanetary disk during the formation of its planets, and inform our understanding on how chemical compositions and abundances vary with distance from the central star.  Their orbital migration distributes volatiles, organic material and prebiotic chemicals around their host system.  In our Solar System, hundreds of comets have been observed remotely, and a few have been studied up close by space missions.  However, knowledge of extrasolar comets has been limited to what could be gleaned from distant, unresolved observations of cometary regions around other stars, with only one detection of carbon monoxide.  Here we report that the coma of 2I/Borisov contains substantially more CO than H2O gas, with abundances of at least 173%, more than three times higher than previously measured for any comet in the inner (<2.5 au) Solar System.  Our ultraviolet Hubble Space Telescope observations of 2I/Borisov provide the first glimpse into the ice content and chemical composition of the protoplanetary disk of another star that is substantially different from our own.

Apparently, the trajectory of the comet tracks its origin back to a point somewhere in the constellation Cassiopeia -- but which star, and how far away it formed, is impossible to tell.

But it makes me picture that chunk of ice starting millions, possibly billions, of years ago in a disc of debris around a far-distant star, then being ejected and wandering for eons in the dark cold of interstellar space before having a single chance encounter with our Sun -- and afterwards, launching off in a different direction to wander in the voids once more, perhaps forever.

The whole thing makes me feel kind of sorry for it.

While anthropomorphizing a comet is probably ridiculous, it does bring home how huge the universe is, and how (comparatively) insignificant we are.  Which is always a good thing to keep in mind.  Humans tend toward hubris, and being reminded every so often that we're not actually All That And A Bag Of Potato Chips is worth it.