New from the "They Made A Movie Out of This and It Didn't End Well," we have: some researchers at MIT who are trying to figure out how to hack into, and control, your dreams.

The world of dreams is so strange and vivid that the idea of selecting or controlling dream content has been the subject of fiction for a very long time.  Ursula LeGuin's brilliant novel The Lathe of Heaven is about the intersection between dreaming and reality -- and about a disturbed young man's discovery that the content of his dreams is altering everyone's reality.

The problem is, because everyone changes simultaneously, so do their memories -- meaning the only one who realizes what's going on is the young man himself.  And when he convinces his psychologist that he's telling the truth, the psychologist decides to use that ability for his own malign purposes.

Introducing a frightening ethical issue into the whole thing.

It's popped up over and over again.  Star Trek: The Next Generation dealt with the necessity of dreams, and what might happen if we're deprived of REM sleep, in the episode "Night Terrors" -- which has the scene which in my opinion is the single scariest moment in the whole series, when Dr. Crusher is wandering through the makeshift morgue trying to figure out why an entire starship's crew died violent deaths at each other's hands, and she turns around -- and the corpses, still shrouded in their sheets, are all sitting up. 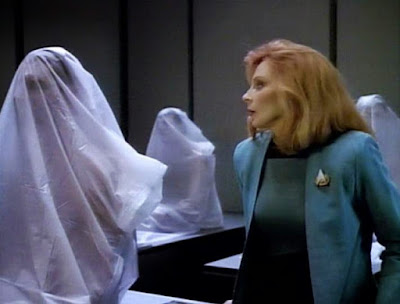 Not to be outdone, The X Files did an episode about controlling dreams -- and how that could be used to alter someone's personality and intentions -- in the episode "Amor Fati," wherein the evil Cigarette-Smoking Man has Fox Mulder so sunk in a realistic dream that Dana Scully has to enter the dream to rescue him by convincing him it's all an illusion.

Perhaps most famously, the movie Inception looks at the possibility of hacking into someone's dreams and placing a subconscious suggestion in the dreamer's mind -- without, of course, his own permission.  This is a lot closer to what the MIT scientists are doing (more on that in a moment), leading to ethical issues that are a bit more likely than the ones in Lathe to stare us in the face.

So this obsession with dreams has come up again and again in fiction, and no wonder.  The content of dreams is wild, and for most of us, uncontrollable.  There's the estimated one percent of us who regularly lucid dream -- they're aware during dreams that they're dreaming, and can learn to control the content -- but most of us, myself included, can't do that.

But now, some researchers at MIT are trying to change all of that.

In the MIT "Dream Lab," scientists have developed a device call Dormio -- it's a form-fitted glove that detects when you're slipping into sleep, and injects an audio cue to insert some image or another into your dream state.  In one trial, the word was "tiger" -- and an impressive number of the test subjects reported that their dreams involved tigers.

Of course, this is just the first step toward broadening our reach into the dream world.  "People don’t know that a third of their life is a third where they could change or structure or better themselves," said Dream Lab researcher Adam Horowitz.  "Whether you’re talking about memory augmentation or creativity augmentation or improving mood the next day or improving test performance, there’s all these things you can do at night that are practically important."

Another Dream Lab researcher, Judith Amores, is trying a different route into the dreaming subconscious -- through the sense of smell.  Long known to have intimate ties into memory, the sense of smell might be a way to jump into the dream world without using an audio cue (which for light sleepers, might simply wake them up).  "The sense of smell is particularly interesting because it’s directly connected to the memory and the emotional parts of the brain — the amygdala and the hippocampus," Amores said.  "And that’s a very interesting gateway to access well-being."

All of it opens up a vast array of possibilities not only for research, but for psychological healing.  A dream-based approach to treating PTSD, for example, has very real potential.  Since one of the functions of REM sleep seems to be memory consolidation, there could also be applications to improving learning capacity and retention of information.  But beyond that, there's just the capacity for it to be pure fun.

"It’s such an exhilarating feeling to lucid dream," Tore Nielsen, a professor of psychiatry at the University of Montreal, said in an MIT blog post.  "You can try flying, singing, having sex — it’s better than VR."

On one hand, I'm not sure we need something else that allows people to hide from reality.  On the other, if I had a device I could wear that allowed me to control my dreams, I'd do it every night.

Think of the fun you could have with self-controlled no-repercussions full-body-sensurround fantasies every night.  I think a lot of us might not want to wake up.

Which brings up a whole other set of problems.

In any case, the researchers in the Dream Lab and other similar projects are looking at this as a way to connect to unused potential, not as a way of controlling people, which is the right approach.  "This is less like, 'I’m going to map something so I control it,' and more like, 'I’m going to give you a looking glass, and you do with that what you will,'" Horowitz said.  "I have very little interest in creating tools that take people further from themselves.  That’s definitely not the hope."

Or, as Ruben Naiman of the University of Arizona's Center for Integrative Medicine put it, "The thing with hacking dreams is that it’s based on a presumption that the subconscious is unintelligent, that it doesn’t have a life.  The unconscious, it’s another kind of intelligence.  We can learn from it. We can be in dialogue with it rather than dominate it, rather than ‘tap in’ and try to steer it in directions we want."

So all of this is pretty exciting, and I still wouldn't hesitate to volunteer to try out whatever they come up with.  But if I put that glove on and end up getting the audio clue, "Corpses in a morgue sitting up," I am right the fuck outta there.