One of the critical functions of our brain, and one that we don't often think about, is its ability to determine quickly what stimuli are important to pay attention to, and which can safely be ignored.

Which is not to say that it always gets things right.  There have been a number of fascinating experiments run on inattentional blindness, our complete lack of awareness of something we saw, presumably because the brain thought other stuff it was witnessing was more important.  You've probably heard about the most famous inattentional blindness experiment -- the video clip with a half-dozen people tossing around balls, where the instructions were (for example) to count the number of times a person in a black shirt caught a red ball -- and test subjects literally did not see the person in the gorilla suit who walked out into the middle of the scene, pounded his chest a few times, then walked off. 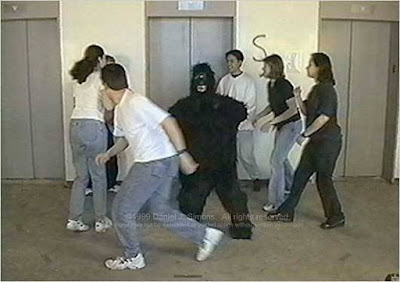 Even more curious is a less-known experiment where a table was set up in a hotel lobby, with one of the researchers sitting behind it (and a tablecloth over the table and down the front, obscuring what was happening underneath).  The researcher asked passersby if they'd mind taking a survey, and when he got a "yes" he handed them a clipboard, then "accidentally" dropped the pencil.  He ducked down to pick up the pencil -- then slipped under the table, and a completely different person came back up with the pencil.  No facial similarities at all.

Not only did virtually no one hesitate at all when the pencil was handed to them -- no reaction whatsoever -- when questioned afterward, a number of the test subjects claimed the researchers were lying about the switcheroo, even after seeing that there were two researchers behind the table who looked nothing alike.

By far my favorite, though, is the short video called "Whodunnit?" that was put together to increase public awareness of how inattentive and distractible we are (in the context of driving safely).  I won't clue you in about what's going on, but if you haven't seen it, take a look.  If you're anything like me, you'll spend the second half of the video with your mouth hanging open in astonishment.


So our brains aren't perceiving everything around us.  Far from it.  There's a filter applied to everything we sense, and the brain is the ultimate arbiter of what it deems important enough to notice and/or remember.  This is at least partly responsible for the experience I suspect we've all had, of having yourself and a friend describe an event and finding out that you and (s)he recall completely different parts of it.

This all comes up because of some research done at the National Eye Institute, published this week in the Journal of Neuroscience, that shows -- at least if human sensory/perceptive systems work like those of mice -- that there's a tenth of a second window during which your brain has to decide something's important, and if that window is missed, the stimulus is simply ignored.

A team made up of Lupeng Wang, Kerry McAlonan, Sheridan Goldstein, Charles R. Gerfen, and Richard J. Krauzlis took mice that had been genetically engineered to have cells that were switchable using a laser, and turned off some neurons in a region of the brain called the superior colliculus that is known to have a role in mammalian visual processing.  The switching mechanism was extremely fast and precise, allowing researchers to time the activity of the cells with astonishing accuracy.  They found that if the cells in the superior colliculus were turned off for a tenth of a second following a visual stimulus, the mouse acted as if it hadn't seen the stimulus at all.

So it looks like (again, if we can generalize a mouse model to a human brain) we may have an explanation for the invisible gorilla and the survey-switcheroo; our brains have a vanishingly short window in which to say "hey, this is important, pay attention!"  If that window passes, we're likely not to notice what's right in front of us.  Obviously, the mechanism works well enough.  It enabled our ancestors to notice their environment sufficiently well to avoid danger and respond quickly to threats.  But what it means is that once again, we're left with the rather unsettling conclusion that what we experience (and remember) is incomplete and inaccurate no matter how much we try to pay attention.  Even if you're concentrating, there are going to be some stimuli about which your superior colliculus says, "Meh, that's not important," and you just have to hope that most of the time, it makes the right call.

Me, I'm still wondering how I missed all that stuff in Lord Smythe's living room.  I guess my superior colliculus was really out to lunch on that one.