The oceans of Europa

On Monday, we looked at some new techniques for detecting exoplanets, and how exciting that is for people like me who are obsessed with extraterrestrial life.  The difficulty, of course, is that even if you find a thousand Earth-like planets in the habitable zone, how could you tell if they're inhabited?  Consider how long the Earth has hosted life (on the order of three billion years) and how long it's been that we've had living things that would be detectible to distant aliens via such signals as radio and television transmissions (on the order of a hundred years).

Life has been present on Earth thirty million times longer than it would be easily detectible to a technological species in another stellar system.

So life could be more or less everywhere out there.  But how could we find it?

The possibilities are limited.  There's been a suggestion that one way is to analyze the atmosphere and look for chemicals like oxygen that are highly reactive and probably wouldn't persist unless there was something (i.e. something living) pumping it in at a constant rate.  But finding planets at a distance is one thing, and analyzing the atmosphere of those planets from something like the faint absorption spectrum lines of the light reflected from the surface, is another thing entirely.

So unless we stumble across a technological society whose signals (deliberate or otherwise) we detect, we could be looking at stupendous biodiversity and never know it.

A different approach is to look for life closer to home.  One of the goals of the Mars rover expeditions was to analyze the soil for the presence of bacterial metabolism, the results of which were equivocal at best.  Venus is out, unless there are life forms that enjoy being in an acidic pressure cooker, which seems unlikely.

But what about the outer planets?

If there is life on the gas giants themselves, it'd have to be unlike anything we have here on Earth.  Carl Sagan hypothesized giant "floaters," creatures like enormous parachutes, that would ride the stormy updrafts of the thick atmosphere and metabolize the methane that makes up a good percentage of it.  But what about the moons?

The moons of the gas giants are possible candidates, as they're small and rocky, and at least some of the larger ones have a stable atmosphere.  The problem is, they're cold.  Ganymede, for example, Jupiter's largest satellite, has a mean surface temperature of about -160 C.

Not exactly your next tropical vacation spot.

But it's not as hopeless as all that, because there's more going on here than meets the eye.  Which brings me to Jupiter's moon Europa. 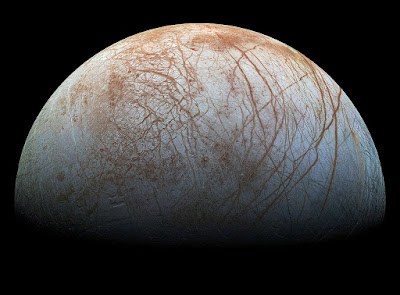 Europa, showing the cracks in the ice sheet colored by what may be a mix of minerals and organic compounds from the subsurface liquid water ocean [Image is in the Public Domain courtesy of NASA/JPL]

Europa is the smallest of the four "Galilean" moons, so called because they were first observed by Galileo Galilei, which led him afoul of the powers-that-be when he claimed they were orbiting Jupiter (Earth, remember, was thought to be the center of the universe, with everything orbiting around it).  But eppur si muove, as Galileo muttered when he was found guilty of heresy ("and yet it moves"), and the total number of Jovian satellites now stands at 79.

Europa, however, is especially fascinating.  Pioneer 10 and 11, the (aptly-named) Galileo orbiter, and most recently the New Horizons probe, have all brought us back a picture of Europa that's curious to say the least.  It's got a surface made mostly of water ice, but its overall density is consistent with being mostly composed of silicate minerals (so it's a rocky ball underneath its icy covering).  Most interesting, though, is that magnetometer readings support the conclusion that between the two is a layer of ion-rich liquid water on the order of thirty kilometers in depth -- a subsurface sea rich in magnesium, sodium, and calcium, traces of which are found on the surface when the cracking of shifting of the ice sheet allows the seawater to bubble up and freeze onto the surface.

This makes Europa an excellent candidate for hosting life, at least the microbial type.  But what's keeping the water liquid, so far out there in the cold reaches of the Solar System?

Apparently, its host planet is.  Jupiter is enormous, and has Europa tidally locked (the same side faces Jupiter all the time).  Its orbit isn't perfectly circular, though, and as it zips around, tracing out an ellipse, the changes in gravitational pull generate tidal flexing.  The giant planet pulls and distorts the core of the moon, and the friction that creates generates enough heat to keep the subsurface ocean liquid.

So we have something a little analogous to the Earth's hydrothermal vents, albeit powered by a different process.  It means that (though it saddens me to admit) it's probably better to put our money into sending a surface probe to Europa, to look for traces of life frozen onto the surface, than scanning the skies looking for life outside of the Solar System.

We could do both, of course.  That'd make me happy.  But given the budget cuts to NASA in the last few years, they've got to put their time, effort, and money into whatever is going to have the greatest likelihood of working.  At the moment, that looks like the search for extraterrestrial life should focus on our own neighborhood -- starting with a moon that initially looked like a lifeless ball of ice.

Posted by Gordon Bonnet at 4:35 AM