The risk of knowing

One of the hallmarks of the human condition is curiosity.  We spend a lot of our early years learning by exploring, by trial-and-error, so it makes sense that curiosity should be built into our brains.

Still, it comes at a cost.  "Curiosity killed the cat" isn't a cliché for nothing.  The number of deaths in horror movies alone from someone saying, "I hear a noise in that abandoned house, I think I'll go investigate" is staggering.  People will take amazing risks out of nothing but sheer inquisitiveness -- so the gain in knowledge must be worth the cost. 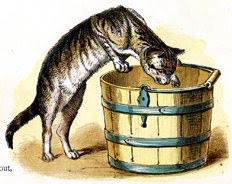 The funny thing is that we'll pay the cost even when what we gain isn't worth anything.  This was demonstrated by a clever experiment described in a paper by Johnny King Lau and Kou Murayama (of the University of Reading (U.K.)), Hiroko Ozono (of Kagoshima University) and Asuka Komiya (of Hiroshima University) that came out two days ago.  Entitled "Shared Striatal Activity in Decisions to Satisfy Curiosity and Hunger at the Risk of Electric Shocks," we hear about a set of experiments showing that humans will risk a painful shock to find out entirely useless information (in this case, how a card trick was performed).  The cleverest part of the experiments, though, is that they told test subjects ahead of time how much of a chance there was of being shocked -- so they had a chance to decide, "how much is this information worth?"

What they found was that even when told that there was a higher than 50% of being shocked, most subjects were still curious enough to take the risk.  The authors write:


Curiosity is often portrayed as a desirable feature of human faculty.  However, curiosity may come at a cost that sometimes puts people in harmful situations.  Here, using a set of behavioural and neuroimaging experiments with stimuli that strongly trigger curiosity (for example, magic tricks), we examine the psychological and neural mechanisms underlying the motivational effect of curiosity.  We consistently demonstrate that across different samples, people are indeed willing to gamble, subjecting themselves to electric shocks to satisfy their curiosity for trivial knowledge that carries no apparent instrumental value.

The researchers added another neat twist -- they used neuroimaging techniques to see what was going on in the curiosity-driven brain, and they found a fascinating overlap with another major driver of human behavior:


[T]his influence of curiosity shares common neural mechanisms with that of hunger for food.  In particular, we show that acceptance (compared to rejection) of curiosity-driven or incentive-driven gambles is accompanied by enhanced activity in the ventral striatum when curiosity or hunger was elicited, which extends into the dorsal striatum when participants made a decision.

So curiosity, then, is -- in nearly a literal sense -- a hunger.  The satisfaction we feel at taking a big bite of our favorite food when we're really hungry causes the same reaction in the brain as having a curiosity satisfied.  And like hunger, we're willing to take significant risks to satisfy our curiosity.  Even if -- to re-reiterate it -- the person in question knows ahead of time that the information they're curious about is technically useless.

I can definitely relate to this.  In me, it mostly takes the form of wasting inordinate amounts of time going down a rabbit hole online because some weird question came my way.  The result is that my brain is completely cluttered up with worthless trivia.  For example, I can tell you the scientific name of the bird you're looking at or why microbursts are common in the American Midwest or the etymology of the word "juggernaut," but went to the grocery store yesterday to buy three things and came back with only two of them.  (And didn't realize I'd forgotten 1/3 of the grocery order until I walked into the kitchen and started putting away what I'd bought.)

Our curiosity is definitely a double-edged sword.  I'm honestly fine with it, because often, knowing something is all the reward I need.  As physicist Richard Feynman put it, "The chief prize (of science) is the pleasure of finding things out."

So I suspect I'd have been one of the folks taking a high risk of getting shocked to see how the card trick was performed.  Don't forget that the corollary to the quote we started with -- "Curiosity killed the cat" -- is "...but satisfaction brought him back."