In her brilliant 2011 TED Talk "On Being Wrong," journalist Kathryn Schulz said, "For good and for ill, we generate these incredible stories about the world around us, and then the world turns around and astonishes us."

That astonishment is at the root of scientific discovery.  Many laypeople have the sense that scientists do what they do by patiently adding data bit by bit, assembling a theory from the results of experiment -- less understood is the fact that much of the time, the experiments themselves happened because of something unexpected that the old model couldn't explain.  It's those moments of, "Hey, now, wait a moment..." that have generated some of the most fundamental theories we have -- universal gravitation, relativity (special and general), evolution, genetics, plate tectonics.

Or, as another luminary of the philosophy of science put it -- James Burke, in his brilliant documentary series The Day the Universe Changed -- "The so-called voyage of discovery has, as often as not, made landfall for reasons little to do with the search for knowledge...  As far as one discovery following another along the way as part of some grand plan, what way?  Going where?"

Now, this is not to say that the lazy student's complaint, "why should we learn science, since it could all be proven wrong tomorrow?", has much merit.  The big ideas, like the ones I listed before, have been so extensively tested that it's unlikely they'll change much.  Any refinements will most probably be on the level of details.  Still... those head-scratching moments do occur, and sometimes they result in an overturning of what we thought we understood -- like the observation that was announced this week from NASA's Chandra X-ray Observatory. 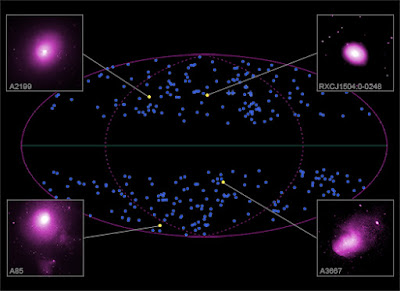 One of the basic pieces of the Big Bang theory is that it resulted in a universe that is isotropic -- it basically looks the same no matter which direction you're looking.  The idea here is that when the universe began to expand, the fabric of space/time stretched out so much in the first tiny fraction of a second (something called cosmological inflation) that it resulted in a uniform, isotropic universe.

The analogy that's been around a long time to explain this -- I remember my college astronomy teacher using it, back in the early 1980s -- is to picture yourself as a tiny person, standing on one dot of a deflated polka-dotted balloon.  If the balloon is inflated, you see all the other dots moving away from you, regardless of which dot you're standing on; and in every direction, the dot-density is pretty much the same.  "There is no center of the universe," I recall our professor, Dr. Daniel Whitmire, saying.  "Or, perhaps, everywhere is the center.  It means essentially the same thing."

So the idea of isotropy is pretty deeply built into the Big Bang cosmology.  So the observation from Chandra announced this week that the universe seems to be anisotropic was a little startling, to say the least.

"Based on our cluster observations we may have found differences in how fast the universe is expanding depending on which way we looked," said study co-author Gerrit Schellenberger of the Center for Astrophysics of Harvard University.  "This would contradict one of the most basic underlying assumptions we use in cosmology today."

Or, as Konstantinos Migkas of the University of Bonn in Germany, who led the new study, put it, "One of the pillars of cosmology... is that the universe is 'isotropic....'   Our work shows there may be cracks in that pillar."

It's possible that the measurement doesn't mean what it seems to mean.  One possibility the researchers came up with that would be less-than-earthshattering is that some of the distant clusters might be moving together because of the gravitational pull of an unseen massive object or objects, throwing off the data enough to make it look like an anisotropy.  Another possibility -- which in my mind raises more questions than it solves -- is that the hypothesized "dark energy" that makes up three-quarters of the energy density of the universe is unevenly distributed, meaning its repulsive force is greater in some places than in others.  "This would be like if the yeast in the bread isn't evenly mixed, causing it to expand faster in some places than in others," said study co-author Thomas Reiprich, also of the University of Bonn, adding, "It would be remarkable if dark energy were found to have different strengths in different parts of the universe."

Remarkable especially since we still basically have no idea what dark energy is.  Going from there to any kind of cogent explanation of why there's more of it here than there seems to me to be a significant leap.

Or, perhaps, none of those is correct, and the anisotropy was built-in at the moment of the Big Bang by some process we haven't even dreamed of.

Whatever it turns out to be, this seems to me to be one of those "wait a moment..." discoveries that could potentially lead to a major revision of what we thought we knew.  What's certain is that it demonstrates how far we have to go in science -- and despite our progress, to paraphrase Kathryn Schulz, the universe will time after time turn around and astonish us.