The voices in our heads

If you needed any further evidence that novelists really are a breed apart, consider the study that was carried out by some researchers at Durham University that appeared in the journal Consciousness and Cognition last month, and was the subject of an article in The Guardian this week.

The team of psychologists surveyed authors at the International Book Festival in Edinburgh, in 2014 and 2018, and asked a  set of curious questions:

Question #9 was obviously thrown in there to identify test subjects who were prone to auditory hallucinations anyway.  But even after you account for these folks, a remarkable percentage of authors -- 63% -- say they hear their characters' voices, with 56% having visual or other sensory experiences of their characters.  62% reported at least some experience of feeling that their characters had agency -- that they could act of their own accord independent of what the author intended.

You might be expecting me, being the perennially dubious type that I am, to scoff at this.  But all I can say is -- whatever is going on here -- this has happened to me. 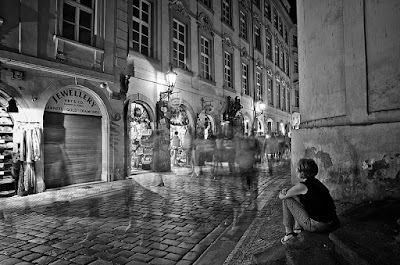 Here are two striking examples of this -- with as little in the way of spoilers as I can manage, in case you want to read the story yourself.

My novella Convection, in the collection Sights, Signs, and Shadows, is about seven people trapped in an apartment complex during a Category-5 hurricane, trying to survive while the world is falling apart around them.  I had initially come up with the character of Jennie Trahan to be the obnoxious, irritating antagonist, getting in everyone's way, criticizing, obstructing, and generally being a class-A bitch.  About a third of the way through, something happened -- something I can best describe as Jennie telling me (in her bossy, snarky tone of voice) that she wanted a different role.  It was almost like she yanked the keyboard out of my hand, told me to go to hell, and started writing her own part.  In the end, you not only find out why she acts the way she does -- something I honestly didn't know about her when I came up with her -- she ends up being one of the most sympathetic (and important) characters in the story.

The other case of this was in my novel Lines of Sight, the first in the Boundary Solution trilogy.  One of the first things that happens is that while out investigating a sighting of the mysterious and frightening Black-eyed Children, the main character Kerri Elias's partner Mike Rivers is abducted.  This spurs Kerri to try to find out what happened to him and, if possible, get him back, but the problem was that I didn't know what exactly had happened to him until halfway through the second book in the trilogy, Whistling in the Dark.  There was a point where suddenly I had the puzzle worked out -- it just popped into my head, as if someone else had explained it to me -- and I said out loud, "Oh, so that's what happened to Mike!  Huh.  I didn't know that."

Those of you who are not fiction writers might well be backing away slowly, keeping your eye on me the whole time, but turns out, I'm far from the only author this has happened to.  Here are some examples that came out of the study:
"The writers we surveyed definitely weren’t all describing the same experience," said study lead author John Foxwell, "and one way we might make sense of that is to think about how writing relates to inner speech...  Whether or not we’re always aware of it, most of us are trying to anticipate what other people are going to say and do in everyday interactions.  For some of these writers, it might be the case that after a while their characters start to feel independent because the writers developed the same kinds of personality ‘models’ as they’d develop for real people, and these were generating the same kinds of predictions."

Which is kind of fascinating.  When I've done book signings, the single most common questions revolve around where my characters and plots come from.  I try to give some kind of semi-cogent response, but the truth is, the most accurate answer is "beats the hell out of me."  They seem to pop into my head completely unannounced, sometimes with such vividness that I have to write the story to discover why they're important.  I often joke that I keep writing because I want to find out how the story ends, and there's a sense in which this is exactly how it seems.

I'm endlessly fascinated with the origins of creativity, and how creatives of all types are driven to their chosen medium to express ideas, images, and feelings they can't explain, and which often seem to come from outside.  Whatever my own experience, I'm still a skeptic, and I am about as certain as I can be that this is only a very convincing illusion, that the imagery and personalities and plots are bubbling up from some part of me that is beneath my conscious awareness.

But the sense that it isn't, that these characters have an independent existence, is really powerful.  So if (as I'm nearly certain) it is an illusion, it's a remarkably powerful and persistent one, and seems to be close to ubiquitous in writers of fiction.

And I swear, I didn't have any idea about Jennie Trahan's backstory and what happened to Mike Rivers.  Wherever that information came from, I can assure you that I was as shocked as (I hope) my readers are to find it all out.