The history of dyes is actually way more interesting than it sounds.

People have been coloring cloth (and pottery, and cave walls, and their own bodies) for a very long time, but all colors don't turn out to be equally accessible to the palette.  Red, for example, is fairly easy, especially if you don't care if it's not screaming scarlet and has a slight brownish tint (what we'd call "brick red"), because that's the color of iron oxide, better known as rust.  Iron oxide is plentiful, and I know from messing around with pottery glazes that it's got two properties: (1) mixed with other minerals and/or heated in the absence of oxygen, it can give you a variety of other colors, from black to dark blue to green; and (2) it sticks to everything.  I have brushes I use in the glazing process that I used once or twice to apply an iron-based glaze, and now they're permanently stained red.

Other colors, however, aren't so easy.  Some of the more notoriously difficult ones are true blues and purples; our appending the word "royal" to royal blue and royal purple is an indicator of the fact that back then, only the really rich could afford blue or purple-dyed cloth.  Blue can be achieved using small amounts of cobalt, or finely powdered lapis lazuli, but neither is common and although they have other uses (cobalt in pottery pigments, lapis in paints) neither works well for dyeing cloth.  Lapis, in fact, was used to produce the finest rich blue pigment for oil paints, which got named ultramarine because the mineral was imported from what is now Afghanistan -- a place that was ultramarinus ("beyond the sea") to the people in Italy and France who were using it.

But dyeing cloth was another matter.  One solution was, bizarrely enough, a secretion of a sea snail of the genus Murex.  These snails' hypobranchial glands produce a gunk that when purified produces a rich purple dye that is "color fast" on cloth.

How anyone thought of doing this is an open question.  Maybe they just smeared slime from various animals on cloth until they found one that worked, I dunno.

Be that as it may, the color of the dye was called φοῖνιξ (phoinix) by the ancient Greeks, and the sea traders who cornered the market on producing and selling the dye were called the Φοίνικες (Phoinikhes).  We anglicized the word to Phoenicians -- so Phoenician means, literally, "people of the purple."

The reason all of this colorful stuff comes up is a paper in Science Advances last week that a group of chemists in Portugal have successfully determined the origin of a purple to blue (depending on how it's prepared) watercolor pigment called folium that was used in medieval watercolors.  It is a gorgeous color, but all previous attempts either to replicate it or to determine its source had been unsuccessful.  The difficulty with trying to figure out things like this is that there was no standardized naming system for plants (or anything else) back then, so the name in one place could (and probably did) vary from the name in another place.  Reading manuscripts about natural dyes from that time period, about all we can figure out is "it's made by boiling this plant we found" or "it's made from special snail slime," which doesn't really tell us much in the way of details. 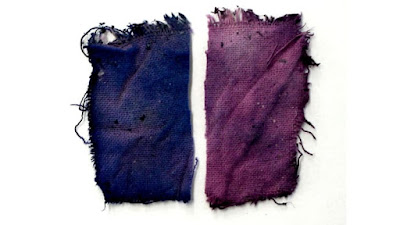 In the case of folium, it was known that it came from a weedy plant of some sort, but there was no certainty about which plant it was or where it grew.  But now some Portuguese chemists have identified the source of folium as the seedpods of a roadside weed in the genus Chrozophora, a little unassuming plant in the Euphorbia family that likes dry, sunny, rocky hillsides, and when you grind up the seedpods, creates a knock-your-socks-off purple dye.  The dye was then applied to cloth, and you took small bits of the cloth and soaked them in water when you were ready to use them to make a natural watercolor paint.

The scientists were able to determine the chemical structure of the dye itself, which is pretty astonishing.  But even finding the plant was a remarkable accomplishment.  "We found it, guided by biologist Adelaide Clemente, in a very beautiful territory in Portugal [called] Granja, near a very beautiful small town Monsaraz -- a magical place, still preserved in time," said study co-author Maria João Melo, in an interview with CNN.  "Nobody in the small village of Granja knew [anything] about this little plant.  It may look like a weed, yet it is so elegant with its silvery stellate hairs that combine so well with the greyish green, and what a story there is behind it."

I'm always impressed with how intrepid our forebears were at using the resources around them to their fullest, but as with the snail slime, I'm mystified as to how some of it came about.  Some of it was probably by happy accident -- I think fermented milk products like yogurt and cheese probably were discovered because of milk that spoiled in just the right way, for example.  But bread has always mystified me.  Who first thought, "Let's take these seeds, and grind 'em up, and add this fungus powder to it with water until it gets all bubbly and smells funny, then stick it in the fire!  That'll be delicious with jam spread on it!"

And here -- grinding up the seedpods of a random weed ended up producing one of the rarest and prettiest dyes ever discovered.  Undoubtedly the brainstorm of some medieval artist or botanist (or both) who happened to get lucky.  Makes you wonder what other plants are out there that could have odd artistic, medicinal, or culinary uses -- especially in places of enormous biodiversity like the Amazonian rainforest, where there are probably as many plant species that have not been identified as there are ones that have been.

So if you needed another good reason to preserve biodiversity, there it is.