There's a fundamental misunderstanding that even some people who understand and accept evolution have, and it's called teleology.

Teleology is the interpretation of events in terms of their final purpose.  Now, there are some things you can look at teleologically; at least some historical events, for example, occurred because someone (or a bunch of someones) had a goal in mind and purposefully drove toward it.

The problem is, evolution isn't goal-driven.  As I mentioned a couple of days ago in the post on the re-evolution of flightlessness in the Alhambra rail, it's the law of whatever works at the time.  But teleological thinking sneaks in all too easily -- all you have to do is to ask your average scientifically-minded fourth grader why giraffes have long necks, and you'll probably get the answer, "So they can reach high branches in trees for food."  This conjures up the image of a herd of short-necked giraffes looking longingly up at the tender, juicy foliage out of reach, and thinking, "Wow, sure would be nice," and over the next generations, that desire to reach the end goal of more food resulted in longer-necked giraffes being born.

It's a subtler distinction than it might seem at first.  The truth is that the variation comes first; the blind forces of mutation and recombination result in baby giraffes with varying neck lengths.  But the better food being higher up means that those with longer necks survive better, passing those genes on -- so over time, the population's average neck length increases.  No goal-driven, forward-thinking forces necessary; it's all driven by what is an advantage in the environment as it currently is.  Change the environment, and you change those selective pressures, and the population (if it has sufficient variability to do so) responds.

The situation is simple enough with giraffe necks (which is why every middle-school textbook on biology uses that as an example), but what about more complex structures?  This is when the subject of things like eyes and wings inevitably comes up, often along with the intelligent-design aficionados' favorite buzzwords -- "irreducible complexity."  A half an eye or half a wing, they say, isn't good for anything, so there has to be forward thinking, teleological design involved.  Modification of an arm into a wing only makes sense if there was intent, because the intermediate forms along the way are worse than what you started with.

There are two flaws in this argument.

The first is brilliantly described in Richard Dawkins's amazing book The Blind Watchmaker, which explains in clear layman's terms why the intelligent design argument doesn't work.  He takes the vertebrate eye as his example, which is admittedly an amazing device with dozens of working parts and thousands (if not tens of thousands) of kinds of proteins, all of which have to work together in order to generate the capacity for clear vision.  As Dawkins points out, though, all of these didn't have to evolve simultaneously -- that would indeed be hard to explain.  Starting with simple light-detecting eyespots (like in a flatworm), the structure evolved to become more and more complex, more and more sensitive, and all that had to happen is at each tiny step the improvement gave the animal an advantage over the previous form.  So the ID-proponents' claim that "half an eye isn't worth anything" is actually incorrect.  An eyespot (which isn't even half an eye -- maybe five percent of one) is clearly better than no ability to detect light at all.  And after that, each refinement made it better and was selected for, until finally you have a complex structure like your own eye, capable of color vision, light intensity accommodation, focusing, and depth perception.

The second flaw, though, is a fascinating one, and is the reason this whole topic comes up in today's post.  For something to be selected for, all it has to accomplish is to confer some sort of benefit on the organism -- not necessarily the one for which it will eventually be used.  This phenomenon, called preaptation (or preadaptation), is usually explained using the example of feathers and wings in birds.  The theory is -- supported by the presence of feathers in fossils of a number of species of dinosaurs -- that feathers evolved in the context of keeping warm (and possibly protecting the skin from sun exposure), and only afterward became useful for the ability of lightweight/arboreal species to glide, and finally to fly.

A second example of this was the subject of a paper last week in Nature, which I was alerted to by my friend, the amazing scientist and environmental activist Sandra Steingraber.  The topic was the hypothesis that preaptation had also occurred in insect wings -- they had evolved as gill extensions in aquatic larvae, and through minor modifications widened and lengthened, and in the adult became full-fledged wings.  The embryonic structures for larval gills and adult wings were certainly homologous, so it seemed like a good guess, but hard evidence was lacking... 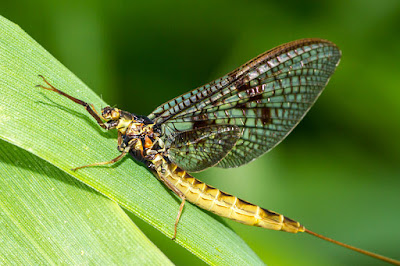 In "Genomic Adaptations to Aquatic and Aerial Life in Mayflies and the Origin of Insect Wings," a team led by Isabel Almudi of the Andalusian Center for Developmental Biology (in Sevilla, Spain) completely knocks it out of the park by identifying the genetic basis of both wings and gills in insects -- and demonstrates that the preaptation hypothesis was spot-on.  Here it is in the authors' words:


The evolution of winged insects revolutionized terrestrial ecosystems and led to the largest animal radiation on Earth.  However, we still have an incomplete picture of the genomic changes that underlay this diversification.  Mayflies, as one of the sister groups of all other winged insects, are key to understanding this radiation.  Here, we describe the genome of the mayfly Cloeon dipterum and its gene expression throughout its aquatic and aerial life cycle and specific organs.  We discover an expansion of odorant-binding-protein genes, some expressed specifically in breathing gills of aquatic nymphs, suggesting a novel sensory role for this organ.  In contrast, flying adults use an enlarged opsin set in a sexually dimorphic manner, with some expressed only in males.  Finally, we identify a set of wing-associated genes deeply conserved in the pterygote insects and find transcriptomic similarities between gills and wings, suggesting a common genetic program.  Globally, this comprehensive genomic and transcriptomic study uncovers the genetic basis of key evolutionary adaptations in mayflies and winged insects.

This completely dismantles the "irreducible complexity" argument for insect wings, if there was any basis for that argument left.  The evolutionary model is vindicated again.  As Almudi et al.'s research shows, the genomic basis in an organism can be modified in such a way as to give structures multiple purposes -- and that if the environment is right, one purpose (e.g. flight) can supersede another (e.g. maximizing oxygen absorption) in importance, causing the evolutionary path to take off in a different direction.

So cheers to Almudi and her team.  I read their paper while grinning like a loon just because it was such a perfect wrap-up to a conjecture I was telling my AP Biology classes about twenty years ago.  It's so gratifying to study a model that has this kind of robust predictive power -- and further reinforces my opinion that in order not to accept evolution, you have to be willfully ignorant of the actual evidence in its favor.

Posted by Gordon Bonnet at 4:39 AM