I love my dogs to pieces, but sometimes they drive me up a tree.

The issue usually is that we're not giving him our undivided attention 24/7/365.  If you can imagine.  Monsters that we are, there are times when we don't want to play fetch with him or pet him, or when we might have other things we need to do.  When this happens, he usually finds some way of getting a rise out of us, like picking up a shoe and walking off with it, swiping something from the coffee table, or dragging a piece of firewood out of the wood cradle next to the stove.  If just taking it doesn't work, he proceeds to chew up whatever he stole, which is not a big deal if it's an empty cardboard box, but is a somewhat bigger deal if it's the TV remote.

Our usual strategy is to give him lots of one-on-one fun time in the afternoon, with the hope that he'll be so tired he'll stay out of trouble during the evening.  This works maybe fifty percent of the time.  When it doesn't, we fall back on the dubious strategy of chasing him around the house yelling, "DAMMIT GUINNESS GIVE THAT BACK."  Which, of course, means that he won -- we're giving him attention, and even better, playing with him, which is clearly how he interprets our running and flailing our arms.  "You are such a bad dog" usually elicits nothing more than a tail wag, because he knows how to game the system, and that's much better than being a Good Boy. 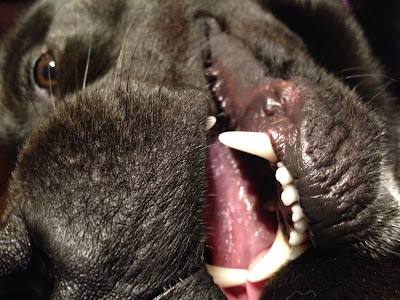 Well, because of a paper this week in Biology Letters of the Royal Society, I found out there's a good reason why Guinness acts the way he does.

In "Teenage Dogs?  Evidence for Adolescent-Phase Conflict Behaviour and an Association Between Attachment to Humans and Pubertal Timing in the Domestic Dog," animal behaviorists Lucy Asher (University of Newcastle), Gary England and Naomi Harvey (Nottingham University), and Rebecca Sommerville (University of Edinburgh) tell us that adolescent dogs go through a lot of the same sorts of annoying stuff that adolescent humans do -- oppositional behavior, selective hearing, and outright defiance, especially of the owner/parents.


...[W]hen dogs reached puberty, they were less likely to follow commands given by their carer, but not by others.  The socially-specific nature of this behaviour in dogs (reduced obedience for their carer only) suggests this behaviour reflects more than just generalized hormonal, brain and reward pathway changes that happen during adolescence.  In parts of this study, the ‘other’ person was a guide dog trainer who may have been more capable of getting a dog to perform a command; however, the results are consistent with parts of the study when the ‘other’ person was an experimenter without the experience of dog training.  We also find the reduction in obedience to the carer and not an ‘other’ person to be specific to the dog's developmental stage and more pronounced in dogs with insecure attachments, which is not easily explained by differences in dog training ability between the carer and other.

I find this fascinating, because it completely parallels my memory of parenting my sons when they were teenagers.  Both of them went through the eye-rolling, good-lord-my-parents-are-stupid phase of development, but while they were in that, we still got consistent stellar reports about their behavior at school.  "They're so sweet and cooperative," their teachers said, over and over.  "Always the first ones to volunteer to help out."

After verifying that yes, we were actually talking about the same teenage boys, Carol and I would just shake our heads and comment that it was better they take their adolescent angst out on us than on their teachers, who heaven knows have enough of that stuff to deal with.  Even if that meant that our request to load the dishwasher was treated as if it were equivalent to turning them into galley slaves and forcing them to row to Scotland.

But it's amazing that dogs go through the same phase.  Makes you wonder what other sorts of parallels they are.  And it gives me some hope that Guinness will grow out of his frustrating, attention-seeking behavior.  Although it must be said that three years old is definitely out of puppyhood, and we're still waiting for improvement.

Maybe it's partly his breed.  One of my friends who is a dog lover came over shortly after we got him (he's a shelter rescue, the best kind of dog to get).  She was greeted enthusiastically by him, and she said, "Oh, a pittie mix!  I love those.  How old is he?"

"You do know that pitties only grow a brain when they're four years old, right?"

That was two years ago, and I'm not seeing much sign of it.  Maybe it's a sudden thing, you know?  Maybe next March, when he's three-years-and-eleven-months old, he'll get this shocked look on his face as his skull fills up with actual brain tissue, and immediately he'll start acting like a Good Boy, and perhaps even apologize for all of the household items he's chewed up.

Look, it could happen, okay?  Don't burst my bubble.  At least not until I find my left shoe.