Diagnosing what ails you

When I was a kid, my parents had a set of books called The Illustrated Encyclopedia of Modern Medicine.  Now, this was circa 1972, so keep that in mind when you read the word "modern," but for the time, they were exhaustive.

Now, I was fascinated by biology even back then, at something like age twelve, so those medical encyclopedias were a source of real curiosity for me.  Not just the pages with the naughty bits -- being right on the cusp of puberty, those were really fascinating -- but all of it.  All the systems and organs and tissues and all the different ways things could go wrong.

That's where the trouble started.  Because I was an imaginative child, I lived up to the maxim of a little bit of knowledge being a dangerous thing.  I could find a good reason why I had damn near every disease mentioned in the The Illustrated Encyclopedia of Modern Medicine.  If I coughed a couple of times... well, it could be tuberculosis.  Or pleurisy.  Or lung cancer.  (Being a twelve-year-old, I didn't smoke.  My father did, although he quit cold turkey right around that time and never had another cigarette.  Still, how much exposure to smoke was... enough?)

I even remember being in the shower and convincing myself that I had a swelling in my armpit (I didn't), and forthwith deciding that I was going to die of Hodgkins' lymphoma.  "Prognosis is poor, even with prompt treatment," said The Illustrated Encyclopedia of Modern Medicine.  So that was it, then.  So young, with such a promising future... cut short by a horrific disease.

Well, of course, it turned out I didn't have any of the above.  I did start to get migraines when I was sixteen, but that didn't take any great insight to figure out given that I had weird visual disturbances, crashing headache, sound and light sensitivity, and horrid nausea, sometimes for twenty-four hours at a time.  But that set of symptoms -- which the Medical Encyclopedia correctly informed me was typical of a migraine -- is the single time I ever self-diagnosed using the books and got it right.

Turns out I'm not the only one.  According to a paper in The Medical Journal of Australia, even today's online resources -- sites like WebMD -- only give the right answer one-third of the time. 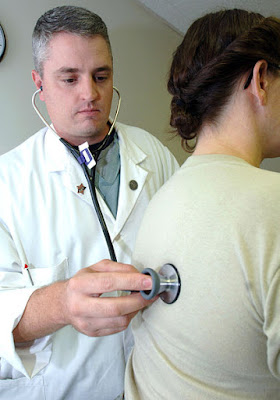 A team of researchers from Edith Cowan University decided to test thirty-six different online "symptom checkers" using forty-eight (anonymous) case files for which the actual answer was known, and found that the top diagnosis from the websites was correct only for a third of them.  Even if you gave them the leeway of considering the top three diagnoses, they still only hit it half the time.

The authors admit there are limitations to their study, beyond the fairly small sample size.  None of the patients had comorbid conditions -- underlying diseases that contributed to the symptoms that presented (such as circulatory failure in the feet having as its ultimate cause poorly-controlled diabetes).  And there are a wide variety of other symptom-checking websites out there, some of which may work better than the relatively poor showing these ones made.

But still.  What this indicates is that if you've got symptoms that worry you, see a doctor.  Now, yes, I know, doctors make mistakes.  They're human, and while a great many are awesome, some are certainly slipshod and careless.  So don't start regaling me with horror stories about misdiagnosis.  I have a friend who damn near died of post-operative peritonitis which was misdiagnosed as, of all things, a urinary tract infection -- so I get it.  Yes, it happens, and it's awful and tragic when it does, and sometimes crosses the line into true medical malfeasance.

But as Carl Sagan points out in his wonderful book The Demon-Haunted World: Science as a Candle in the Dark, if you're going to be fair, you have to consider the hits along with the misses.  How many people are treated daily in your average city hospital -- and of those, how many suffer the effects of significant medical bungling?  By and large, modern medicine has done astonishingly well.  At the present time we have the longest average life span the human species has ever enjoyed, and diseases that were a death sentence only a hundred years ago are now completely curable.

So please, please don't rely on self-diagnosis.  Your ten minutes of online "research" is not equivalent to your family medical practitioner's ten-plus years of education and experience.

After all, I probably did myself more damage worrying over whether I had chronic myelogenous leukemia or myasthenia gravis or Creutzfeld-Jakob syndrome than any benefit I gained from finding out about them.  I'm now 59, and have been pretty healthy overall.  I don't even get migraines any more.

But if something does go wrong, I'm gonna go to the doctor, not go running to find out what WebMD might have to say about it.