I was making dinner last week, and the recipe called for soy sauce.  I knew we had a bottle of it -- and I was pretty sure it was somewhere in the door shelves of the fridge, amongst the various salad dressings, jellies, jams, sauces, and marinades we'd collected.  But I could not find the damn thing, and was becoming increasingly frustrated.

So instead of a quick scan -- usually sufficient to find what I'm looking for -- I decided on a one-at-a-time, bottle-by-bottle search, and as you've probably already guessed, I found the soy sauce in under thirty seconds.  I realized immediately what the problem was; in my mind I pictured it as having a red cap, and our bottle had a green cap.

You'd think that wouldn't make a difference, given that everything else about it was exactly like what I was picturing, up to and including being full of soy sauce and having a big label on the front that said, "SOY SAUCE."  But one piece of the search parameter was off, and that made me scan right past it, not once but several times. 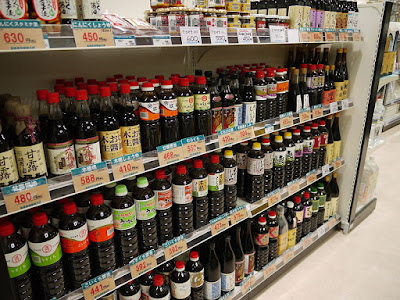 This is far from the first time this sort of thing has happened to me, and it amazes me how subtle the error can be and still derail my efforts.  It doesn't have to be anything nearly as egregious as in the hilarious anecdote Dave Barry writes about when his mother, groceries in a cart and two small children in tow, spent an hour trying to find her car in the store parking lot.  She looked so pathetic that several kind shoppers pitched in to try to help her.  "It's a black Chevrolet," she said, over and over.  It was only after the search had gone on for a ridiculous length of time, up and down the parking lot lanes, that she remembered that the previous week they'd traded in their old car for a new one, and told the helpers, "Wait!  I just realized, it's not a black Chevrolet, it's a yellow Ford!"

The helpers apparently were not amused, and his mom spent the rest of her life trying to live down the embarrassment.

So we can be confounded by our brain's preconceived notions of what we're looking for, from the subtle to the (should be) obvious.  And some researchers at Johns Hopkins University have found that finding the right search parameters even extends to characteristics we can't see.

This puzzling result came out of a series of experiments that were the subject of a paper this week in the Journal of Experimental Psychology.  The team, led by cognitive neuroscientist Li Guo, timed how long it took test subjects to isolate a target object from clutter, and they found that knowing characteristics of the object that aren't apparent to the eye -- like hardness or fragility -- significantly improved the speed with which subjects could find the object in question.  The authors write:


Our interactions with the world are guided by our understanding of objects’ physical properties.  When packing groceries, we place fragile items on top of more durable ones and position sharp corners so they will not puncture the bags.  However, physical properties are not always readily observable, and we often must rely on our knowledge of attributes such as weight, hardness, and slipperiness to guide our actions on familiar objects.  Here, we asked whether our knowledge of physical properties not only shapes our actions but also guides our attention to the visual world.  In a series of four visual search experiments, participants viewed arrays of everyday objects and were tasked with locating a specified object.  The target was sometimes differentiated from the distractors based on its hardness, while a host of other visual and semantic attributes were controlled.  We found that observers implicitly used the hardness distinction to locate the target more quickly, even though none reported being aware that hardness was relevant.  This benefit arose from fixating fewer distractors overall and spending less time interrogating each distractor when the target was distinguished by hardness.  Progressively more stringent stimulus controls showed that surface properties and curvature cues to hardness were not necessary for the benefit.  Our findings show that observers implicitly recruit their knowledge of objects’ physical properties to guide how they attend to and engage with visual scenes.

What I find most curious about the results of this experiment is if the characteristic you're given can't be seen, how does it help your brain to locate the object you're searching for?  "What makes the finding particularly striking from a vision science standpoint is that simply knowing the latent physical properties of objects is enough to help guide your attention to them," said study senior author Jason Fischer.  "It's surprising because nearly all prior research in this area has focused on a host of visual properties that can facilitate search, but we find that what you know about objects can be as important as what you actually see...  To me what this says is that in the back of our minds, we are always evaluating the physical content of a scene to decide what to do next.  Our mental intuitive physics engines are constantly at work to guide not only how we interact with things in our environment, but how we distribute our attention among them as well."

So it may be that we're approaching our search from a set theory perspective; searching through "the set of all things in my living room" is more efficient if I can eliminate "the subset of things in my living room that are rigid, heavy, stand upright," etc., so eventually my brain can whittle it down to "the couch throw-pillow my dog dragged behind the recliner."

It's still puzzling to me how our brains actually accomplish this, because it means some kind of interaction is occurring between our visual interpretive systems and our non-visual memories (of such things as texture, durability, and so on).  It'd be interesting to have people perform this task while in a fMRI machine -- and see how their brain firing pattern differs while performing this task as compared to performing a task that simply requires memory retrieval.

So that's our latest look at the fascinating world of cognitive neuroscience.  It doesn't explain, however, the weird phenomenon that happens to me while I'm doing home repair projects, wherein I spend 5% of the time doing actual home repair and 95% stomping around swearing and looking for the tool that was just in my damn hand five seconds ago.  That one's a mystery.