When I retired in June of 2019, I made the big mistake of saying aloud, "Wow, I'm going to have so much free time now!"

Literally the week after my last day at work, we found out that one corner of our house foundation was sinking, and that if we didn't do something, the slab was going to crack, leading to the walls destabilizing.  Our house, basically, was sliding down the hill it was built on.

The upshot of it all was that we spent the next few months completely gutting our (formerly finished) downstairs so that foundation specialists could drill down, inside and outside, and install twenty-six hydraulic piers to prop the slab up and prevent further subsidence.  Pulling up the carpet and pulling down the wall coverings and ceiling uncovered a myriad other old-house problems, leading to a domino effect of increasingly costly repairs.  Almost a year later, we still haven't completed putting the downstairs back together, although I'm comforted by the fact that our house didn't fall down.

And at least we didn't find what a couple in Seivåg, Norway did when they pulled up the floor in their house to install insulation.  Mariann Kristiansen, whose great-grandfather built the house in 1914, was unaware that she'd been living on top of a Viking-era grave that archaeologists have dated to between 950 and 1050 C.E.

Amazingly enough, there were no ghosts involved.  I would have thought that a house built on a grave site would have been a perfect opportunity to bring out the ghosts, but no.  The whole thing, apparently, was handled completely pragmatically.

The grave came to light when Kristiansen found a bead of dark blue glass that at first she thought was the wheel of a toy car.  But when she poked around a little more and found an axe, she decided that her initial hypothesis wasn't correct.

It turns out that a layer of flat stones immediately beneath the house is probably the remains of a cairn built over a grave, although preliminary digging has yet to uncover any bones.  But the artifacts found are consistent with "grave goods" of the Viking era.

"I never heard of anything like that and I've been in business for nearly thirty years," said archaeologist Martinus Hauglid.  "They did a magnificent job, they reported it to use as soon as they got the suspicion that it actually was something old." 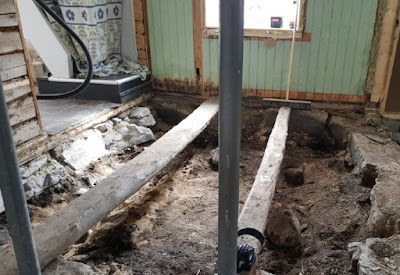 My first reaction was to wonder why other people had all the luck, since all we found when we ripped up the foundation was cracked plumbing and disgusting 1950s-era vinyl tile.  But a friend of mine pointed out that (1) living in upstate New York, it was unlikely that we'd find Viking graves anywhere nearby, and (2) it was probably better that we didn't find anything of the sort.  "This is going to be so expensive for that family, depending on the laws in Norway," she said.  "If you find bones here [in Canada], you’re on the hook for the cost of the archeologists, the exhumation, and reburial.  Could be 50k at least.  Not to mention the months of digging, your yard trashed, possibly your house.  A nightmare."

I hadn't even considered that downside.  I mean, we thought we had delays and setbacks in getting our house put back together; if we'd discovered some kind of valuable archaeological site underneath the floor, it's an open question as to whether we could even legally rebuild over the top of it.  At that point, the best option might be what Carol suggested, only slightly tongue-in-cheek, after finding out about the sinking-slab problem last June: "Hmm, let's see -- forty thousand dollars to prop up the foundation, or fifteen bucks for five gallons of gas and a box of matches.  Hard decision, right there."

I pointed out that twenty years in prison for arson was kind of a downside of the latter option, which she grudgingly admitted was a valid point.

I'm hoping that the laws in Norway support some kind of compensation for Kristiansen's find and the inconvenience thereof.  Archaeologist Hauglid gives me hope that'll happen.  "I guess, they will get some reward, that is normal in Norway, that people that find old artifacts get a reward from the state," he told reporters.

So I suppose I should be careful what I wish for.  I got enough of an object lesson in that by speculating about how bored I'd be once I retired.  At least we've now covered the floor back up, so anything down there is gonna stay buried.  Unless we're, like, sitting on top of a fault line or a volcanic vent or something.  Which, considering some of the other things that have gone wrong since we started this Adventure In Home Ownership, wouldn't be all that surprising.