In your wildest dreams

So, last night, this weird thing happened.  I was skinnydipping in the Caribbean, swimming along trying to get to the other side, when I noticed some people on a boat following me.  They started yelling at me, not (surprisingly) to ask why I was out in the middle of the ocean, but to let me know that there was a hurricane coming and I'd better swim faster because otherwise I wouldn't reach Senegal (which is apparently on the "other side of the Caribbean") in time to avoid drowning in the storm.  They then motored off to get to safety themselves.  It never crossed my mind to wonder why, if the situation was so dire, they hadn't hauled me aboard.  Maybe it was because they were embarrassed by the fact I was naked and they didn't have an extra pair of swim trunks, although I don't remember being much bothered by the fact myself.  Or maybe it was because I'd apparently gotten out there myself, I could damn well get myself out of it, and they'd done their duty by at least letting me know that I was about to be in the middle of a cyclone.

I don't remember what happened after that.  I think it got a little weird.

Somewhere along the way, I woke up, and in the words that every bad fantasy writer has written at some point, "He realized it was only a dream."  Lying there in the dark, I started wondering why my errant brain had come up with something that odd, and came to the conclusion that it was an amalgam of various things over the last few days, like the NOAA bulletin I read saying we were likely to have an above-average year for dangerous hurricanes, and looking at some photos someone posted on Twitter from West Africa.  The skinnydipping part at least makes a modicum of sense because I love to swim but kind of hate swearing swim trunks.  Fortunately I have a pond that's in the privacy of my fenced back yard and only visible from the road if you look exactly in the right direction at exactly the right time, and my opinion is if someone's that determined to see my bare ass, they can have at it.  (Of course, given the way the weather's currently going in the Northeast, it'll probably be August before I'd be willing to swim without a fully-insulated dry-suit, much less naked.)

And for the record, this dream still wasn't as completely fucked up as my wife's dream a couple of nights ago about being tackled by an enormous kangaroo, or the one last night where she had rented an apartment in Washington D.C. but was dismayed to find that it had no door, and the only way you could get in was by climbing through the mail slot. 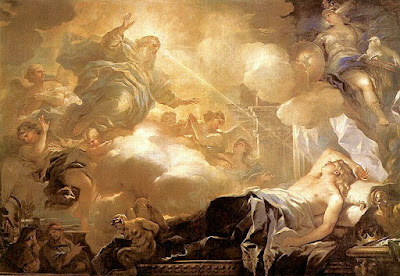 Apparently even King Solomon had some weird dreams, because I don't know what the hell this is about.  Luca Giordano, The Dream of Solomon (1694) [Image is in the Public Domain]

All of this comes up because of a paper this week in Cell Reports about a study of two epileptic patients who had implants to monitor their brain activity.  These electrodes were supposed to act as neuromuscular interfaces, allowing the individuals to overcome motor paralysis and move their arms simply by thinking about it, but along the way the devices made sensitive readings of neural firing patterns.  And what the researchers found was that when the patients went into the REM (rapid eye-movement) phase of sleep, during which we dream, the brain was apparently replaying firing patterns for motor control that had been learned the previous day.

So the researchers had the patients play a mental game of "Simon" -- remember the popular electronic toy where you had to press buttons to repeat a pattern of sounds and colors?  Of course, given these individuals' disabilities, they couldn't play the actual game, so the scientists instructed the patients to think through and recall the pattern they'd just seen, picturing themselves pushing the buttons in the correct order.

Then the patients took a nap.  And during REM, the same pattern emerged as they'd seen during the mental game.

Apparently, they were playing Simon in their dreams.

My wife had an experience like this back when she was in graduate school, and engaged in the occupation that all serious grad students take part in, namely: playing video games instead of studying.  In her case, it was Tetris, and she finally realized she was spending way too much time playing it when she started having Tetris dreams.

But evidently this is something we all do, and gives us a lens into why we dream in the first place.  It's long been thought that dreaming has to do with memory consolidation -- reinforcing pathways that the brain has decided are important, moving critical memories into long-term storage, and pruning away information that is less essential.  Your brain makes the understandable (if sometimes erroneous) judgment that if you repeat an activity a bunch of times, it must have some survival value, and you replay it while you sleep so you can do it more fluidly when you're awake.

Even if all you're practicing is your ability to stack up bunches of colored blocks while vaguely Russian-sounding music plays in the background.

"This study is fascinating," said Dr. Richard Isaacson, director of the Alzheimer's Prevention Clinic at Weill Cornell Medicine and New York-Presbyterian Hospital, who was not involved in the study, in an interview with CNN.  "Despite decades of research, it remains somewhat unclear how 'short-term' memories get filed away to become 'long-term' memories that can be recalled later.   Using a brain-computer interface is an exciting way to study memory since it can record brain cell activity patterns and then look for those exact patterns later...  This supports the notion that in order to optimize memory function and learning, people need to prioritize restful activities -- most importantly adequate sleep -- to keep our 'engines' running at peak performance."

Which is fascinating, but hardly news to chronic insomniacs like myself.  I know that after a night's poor sleep, everything -- memory, motor responses, mood, sensory awareness -- is affected negatively.  The restorative power of sleep is well-documented, and absolutely essential to health, both physical and mental.

What this study does, though, is to pinpoint one of the ways sleep helps us -- by reinforcing our memory of critical events from the previous days.  We already knew why dreams are so bizarre; during REM, the prefrontal cortex -- which among many other things, acts as a sort of "reality filter," allowing you to sift fact from fantasy -- is essentially offline.  Apparently the memory consolidation function works best when you can get the hypercritical "Okay, that is clearly not real" part of your brain out of the way.

But I still don't think it can explain why I was swimming toward Senegal, naked, during a hurricane.