Looking for a biosignature 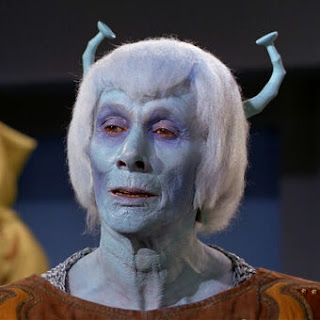 No, unfortunately, I'm not about to announce we've located the Andorian home world.  Maybe next time.

We're returning to this favorite topic of mine because of a paper this week in Astrophysical Journal Letters by a team led by Lisa Kaltenegger, of the Carl Sagan Institute of Cornell University, right in my part of the world in upstate New York.  Kaltenegger et al. describe models they've developed to refine how we look for Earth-like exoplanets -- by trying to figure out what our own world would have looked like from the depths of space during its entire geological history.

In "High-Resolution Transmission Spectra of Earth Through Geological Time," Kaltenegger's team recognizes the phenomenon we've discussed here before -- that seeing farther out into space means seeing further back into time.  An intelligent, technological alien species as little as 150 light years away wouldn't have any way of knowing that the Earth hosted a complex civilization with its own sophisticated scientific and technological capabilities, because they'd be seeing us as we were 150 years ago -- before the invention of long-distance radio-wave communication.  To them, the Earth would be a small rocky planet that was entirely silent, and apparently, devoid of life.

So are we making the same mistake with the exoplanets we're seeing?  And is there a way to get beyond that, and find "biosignatures" -- detectable traces of life on a far-distant world?

The key, says Kaltenegger, is in the world's atmosphere.  As the light from its host star passes through the thin envelope of gases surrounding the planet, the light is altered; each kind of gas has a specific set of frequencies it can absorb, and those are selectively removed from the stellar light, creating a dark-line or absorption spectrum.  This gives a fingerprint of what gases are there -- and, potentially, tells us what's going on down on the planet's surface, including whether or not there's anything alive.

The data they're using comes primarily from two sources -- the orbiting James Webb Space Telescope, and the Extremely Large Telescope out in the Atacama Desert of Chile.

I don't know about you, but the name of the latter always makes me laugh.  I'm picturing the scientists coming up with a name for the observatory after it was complete:

Kaltenegger's team is looking for the presence of highly-reactive gases -- oxygen being the most obvious example -- that wouldn't be in an atmosphere unless something was continually pumping it out.  While there could be a non-biological way to inject large quantities of oxygen into an atmosphere, the better likelihood is some analogue to photosynthesis.

In other words, life.

The nice thing about this approach is that the presence of oxygen would have been detectable here on Earth over a billion years ago -- thus, potentially detectable by technological aliens from up to a billion light years away.  That's quite a window.  "Even though extrapolations from our findings suggest that one out of five stars hosts a planet which could be like Earth, it would be extremely surprising if all of them were at our Earth’s evolutionary stage," Kaltenegger said.  "So taking Earth’s history into account to me is critical to characterize other Earth-like planets."

What the team did is predict what the absorption spectra of the Sun's light would look like after passing through the Earth's atmosphere during the various periods of our prehistory -- the anoxic period (prior to the evolution of photosynthesis), the time during which aerobic life was present but uncommon, the transition to the land & evolution of plants, and so on, up through the Industrial Revolution, when (as James Burke put it in After the Warming) "instead of the atmosphere doing things to us, we started doing things to it."

The technique is not without its difficulties, however, most notably that the absorption spectrum of one of the biologically-produced reactive gases they studied -- methane -- is awfully close to that of water.  So teasing apart what's the signature of a ubiquitous compound, and what's the actual fingerprint of life, may not be simple.

What's certain is that we've only scratched the surface of what's out there.  At present there are a few more than 4,000 exoplanets identified, a lot of which are gas-rich Jovian planets that are likely not to have a solid surface.  (The reason for this is that the two main techniques for locating exoplanets, stellar occlusion and detection of a "wobble" in the star's position, work much better if the planet in question is large, biasing us against detecting small rocky worlds like our own.)  But if Kaltenegger is right that twenty percent of stars have Earth-sized planets, that's a lot of potential homes for alien life.

I don't know about you, but to me, that's tremendously exciting.  Even if we can't detect Vulcans and Klingons and Andorians yet, we might just be able to see if there's life at all out there.

And I'd be satisfied with that.  Just knowing we're not all alone in the cosmos would be reassuring, even if we don't know what that alien life is like, or whether they might be looking back at us through their own telescopes.