When I first read C. S. Lewis's book Out of the Silent Planet, when I was in high school, one of the things that struck me was his vision of life on Malacandra -- what we here on Earth call Mars.

Malacandra, Lewis tells us, is evolved sentient life much earlier than the Earth did, and is therefore approaching the end of its habitability -- the planet is cooling (the majority of its surface is too cold, and the air far too thin, to support life), and its three species of intelligent life have retreated to the deepest parts of the canyons, where the hot springs keep things comfortable.  Given that this is Lewis, there are supernatural overtones to the story, and it's a rollicking good adventure, but what stuck with me most is his vision of a planet that is dying.  Just about every other science fiction novel or movie or television show at the time seemed to picture things as static -- whatever the civilization was, it was just kind of there.  You got the impression things could go on that way forever.

Lewis, on the other hand, recognized not only that organic life forms evolve, but that the planets they live on change as well, and not just in relatively minor ways such as the arrangement of the continents and the depth of the oceans and the presence or absence of ice caps.  The entire planet can shift in such a way as to become uninhabitable -- and, as Lewis points out, that will be the ultimate fate of the Earth as well.

Mars just happened to be closer to the end than we are. 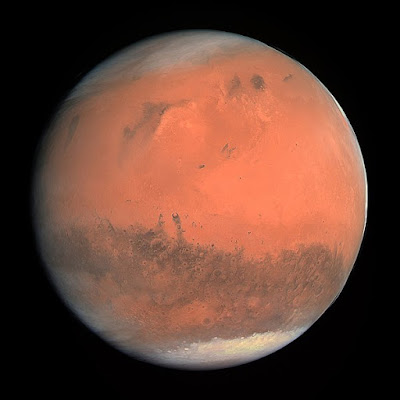 The truth of Lewis's vision has been realized lately in our discovery that long ago, Mars was warm enough to have liquid water and a significant atmosphere.  And this week, a paper came out in Nature Communications that analyzes date from the HiRISE camera on board NASA’s Mars Reconnaissance Orbiter showing that Mars's rivers and oceans left behind layers of sedimentary rock -- a site where future exploration might look for fossils of Martian life.

"Unfortunately we don’t have the ability to climb, to look at the finer-scale details, but the striking similarities to sedimentary rocks on Earth leaves very little to the imagination," said lead author Francesco Salese, from Utrecht University in the Netherlands, in a press release.   "To form these 200-metre-thick deposits we needed conditions that would have required an environment capable of maintaining significant volumes of liquid water."

What this means is that not only was it warmer, the atmosphere was thicker.  The current thin atmosphere on Mars's surface means the pressure is low enough that water would evaporate away post-haste.  A billion years ago, Mars's climate was a great deal more like Earth's is today, but why the change happened isn't known.

I doubt it was the evil eldil from Thulcandra smiting the planet with his mighty fist, but otherwise, Lewis's picture of Mars's evolution toward the dead world it currently is was remarkably prescient.

"We’ve never seen an outcrop with this amount of detail on it that we can definitely say is so old,” said study co-author Joel Davis, postdoctoral researcher at the Natural History Museum in London.  "This is one more piece of the puzzle in the search for ancient life on Mars, providing novel insight into just how much water occupied these ancient landscapes...  The rivers that formed these rocks weren’t just a one-off event — they were probably active for tens to hundreds of thousands of years."

I hope this will spur us to launch more projects with landers that can excavate and analyze these rocks, looking for (amongst other things) fossils.  What we can do remotely, albeit amazing, is still pretty rudimentary -- we can't launch an electron microscope into space yet -- but even a preliminary analysis of the sedimentary layers could produce some fascinating results.