In his 1980 essay "The Cult of Ignorance," scientist, novelist, and polymath Isaac Asimov wrote, "The strain of anti-intellectualism has been a constant thread winding its way through [American] political and cultural life, nurtured by the false notion that democracy means that 'my ignorance is just as good as your knowledge.'"

Asimov's words are, if anything, truer today than they were forty years ago when he wrote them.  It's an attitude I have a hard time comprehending.  My opinion has always been that of course I want our leaders to be more intelligent than I am; I know I'm not nearly smart enough to be the president.  But we've gone beyond the acceptance of ignorance Asimov pointed out into the realm of celebrating abject stupidity -- and, all too frequently, electing it to public office.  We've entered a terrifying time of living in the Upside Down, where individuals who can't put together a single sensible, grammatically-correct sentence, who engage in playground taunts that would sound immature coming out of the mouth of a third-grader, are lauded as "plain-spoken" and "willing to say what's on their mind."

Of course, as Stephen Colbert pointed out, "My drunk uncle says what's on his mind, and I don't want him to be president, either."

The American attitude toward intellectuals jumped out at me just a couple of days ago because of a charming piece of research into the behavior of "oobleck" -- the bizarre cornstarch/water mixture most of us got to play with as children.  Oobleck is a dilatant fluid, one in which the viscosity increases in proportion to the amount of shear strain.  Put more simply, if you hit it, it acts like a solid; if you press it gently, it acts like a liquid.  It is one of a group of weird substances called non-Newtonian fluids, which alter in viscosity dependent on stress, and include materials that are thixotropic (the fluid thins when it's stressed, like yogurt and ketchup) and ones that are rheopectic (the fluid thickens when it's stressed, like printer ink).  (Nota bene: it sounds like dilatant and rheopectic fluids are the same thing, but there's a technical difference in that rheopectic fluids continue to increase in viscosity the more they're shaken, while with dilatant fluids it's kind of an either/or thing.  But that's a minor point.) 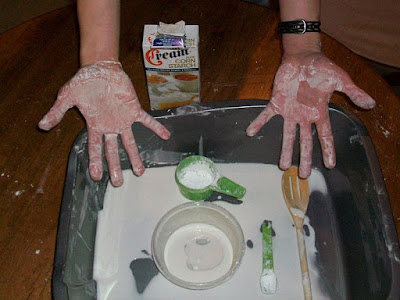 In any case, the research I referenced above came out last week in Science Advances, and had to do with the old party trick of filling a shallow basin with oobleck and having people run across it barefoot.  Because of oobleck's dilatant nature, the faster you run, the harder the soles of your feet strike the surface -- so its viscosity and resistance increase, and you can run on the surface of something that's technically a liquid.

It turns out that there's a simple way to defeat this ability; all you have to do is rotate the basin.  The twisting motion means that when your foot strikes the surface, there's not only a vertical stress from the impact, there's horizontal shear from the basin turning under you, and that perpendicular shear reduces the viscosity and gets rid of the dilatant effect.  In other words, try running in oobleck on a rotating basin, and you'll sink.

I thought this was a pretty fun piece of research about a substance's very odd behavior, and noted with approval that it had been posted on social media...

... until I started reading the comments.

Here is a sampler.  Spelling and grammar are as written, because I don't want to run out of sics.
*brief pause to scream obscenities and kick a wall*

Okay, let me point out a few things, now that I've gotten that (mostly) out of my system.

First, just because the experiment was performed using something associated with kids' parties, they think it has no other applications?  What this shows is that they didn't even bother to read the paper itself, because the authors say the following:


The ability of OSP [orthogonal superimposed perturbations, the application of a rotational shear to flowing fluids] to de-solidify plugs formed under extension and fast compression has potential industrial applications where it is important to increase the flow rate or control the viscosity or unclog a pipe.  These applications range from high-throughput processing of dense suspensions such as cement and concrete to avoid jamming in narrow pipes and three-dimensional printing.

Stop for a moment and consider how many examples you can come up with of thick fluids flowing through pipes.  You think coming up with a simple, inexpensive way to stop those pipes from clogging is "the usual libtard jerking off?"

Second, there is a huge value to pure research.  I dealt with this here at Skeptophilia a very long time ago in a post that was spurred by the same kind of cretinous anti-intellectual commentary as this one was.  It looked at how pure research (which the uninformed call "just messing around") gave us, amongst many other things, antibiotics, x-rays, Teflon, and our understanding of anaphylactic shock and how genes produce proteins.  Just because you (not you personally) can't see the utility of a piece of research doesn't mean the scientists can't see it.

Third, why do these people think everything has to have utility in the first place?  Science used to be rightly revered for its capacity to expand the mind, to open our eyes to the wonder of the universe, to understand a small piece of it a little more clearly.  The subtext of the commentary from the yahoos I quoted above seems to be, "I'm fine being stupid and you have no right to try to fix that, or even to be smarter than I am."  This is, essentially, being arrogant about stupidity. as if being an absolute moron was a virtue, as if they were proud (and fortunate) that their brains had never been contaminated by any of that useless book-learnin'.

I honestly don't know how we've gotten here.  The popular attitude toward science and the intellect has become a race to the bottom.  A race we seem to be winning, given that we have a senator who thinks that a snowball disproves climate change, a representative who thinks we shouldn't be limiting our production of carbon dioxide because it's necessary for plant growth, and a president who makes so many ludicrous and ignorant statements daily that they're hard to keep up with.

A lot of it probably has its origins in the misguided egalitarianism that Asimov pointed out.  No, my ignorance is not as good as your knowledge.  All opinions are not equal.  My fifteen minutes of online "research" is not equivalent to the ten years of intensive study you spent to become an actual scientist.

Now, I'm not saying ignorance is necessarily shameful.  We're all ignorant about some things.  But we shouldn't be proud of it, either, and -- more to the point -- we should all be trying to remedy it.  Science remains our best way of doing that, and that means actual science, done by actual trained scientists who know how to evaluate data and who know when a hypothesis is supported and when it isn't, not the latest bizarre claim by some self-styled expert who happens to have a computer, a microphone, a YouTube channel, and a vastly inflated sense of the validity of his own opinions.

But once you've decided that ignorance is desirable, you've crossed a line into outright stupidity.  Ignorance is inevitable; stupidity is a choice.  Or, as it was put by my dad -- who wasn't well educated, but was one of the wisest, smartest people I've ever met, and who worked like hell to learn and to fill in those gaps in his knowledge left behind from his impoverished childhood -- "Ignorance is only skin deep; stupidity goes all the way to the bone."