Today I'd like to look at three topics that came up for one reason or another in the last few days.

First, have you ever thought about catnip?  It's peculiar stuff.  A member of the mint family, Nepeta cataria (no, I didn't make up the species name) is a rather un-showy plant with gray-green stems and off-white flowers.  Its strangest characteristic, as I'm sure you know, is that it produces what amounts to kitty drugs.  The chemical nepetalactone is produced in significant quantities by the plant, and is responsible not only for its musky smell but for its apparent psychedelic effects on cats.  Cats who are susceptible to it -- and some, I understand, are not, although every cat I owned was a total catnip junkie -- purr, roll around in it, become playful and frisky, and their eyes dilate. 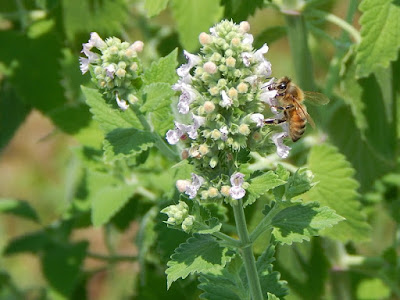 [Image licensed under the Creative Commons AlishaLH, Bee on Catnip Flowers, CC BY 4.0]

Clearly this is an accident; it's hard to imagine a plausible scenario in which the trait of producing this chemical evolved for the express reason of making cats flail around.  There's a presumption that it has a repellent effect on insects, which is certainly true about a lot of the aromatic substances produced by plants, but that's unsubstantiated.

The reason this comes up is that scientists at the Max Planck Institute of Chemical Ecology have decoded the genome of catnip, and they found that the nepetalactone gene apparently evolved more than once.  There are inactive "pseudogenes," stretches of DNA whose function has been lost over time to mutations, nearly identical to the current (functional) nepetalactone gene.  So evidently the gene evolved a second time, probably from another gene for producing chemicals of the class nepetalactone belongs to (the iridioids, which sounds like an alien species on Doctor Who but isn't), and then was advantageous enough that it kind of went into overdrive in catnip.

Apparently whatever its function is, it's important for more than getting kitties high.

So we're not the only species that has a strange psychological reaction to various naturally-produced chemicals in plants.  It's a good thing, though, that there's no such thing as (for example) moosenip, because the idea of a bunch of moose frolicking about and rolling around in your front yard is a little terrifying.


The next story comes from some research released last week by NASA's Transiting Exoplanet Survey Satellite (TESS), which made an interesting discovery about a rather odd kind of star.  Called Delta Scuti stars (after the first star identified in this class), they are a pulsating variable that are more common than astronomers thought at first -- there's good evidence that the bright stars Altair and Denebola, in the constellations Aquila and Leo respectively, are also in this class.

What makes these stars so odd is not their fluctuations -- periodic variable stars are actually rather common -- but that some parts of the star move outward and dim, and other parts pull inward and brighten, at the same time.  The whole star, therefore, seems to ripple.  The astrophysicists believe this is because as parts of the star heat up, more of the helium in the outer shell becomes ionized; ionized helium is more opaque to light, so it blocks light trying to escape from the core and balloons outward.  Once it cools, it falls back inward, and since this happens at different times in different places on the surface of the star, there are pulsations in not only the overall brightness of the star, but which parts of the star are bright and which are dim.

A paper in Nature last week showed that their behavior may not be as chaotic as it seemed at first.  Data from TESS has shown that these surface fluctuations have their own kind of periodicity -- some, for example, seem to contract and expand one hemisphere at a time, not at random places on the star.

"Delta Scuti stars have been frustrating targets because of their complicated oscillations, so this is a very exciting discovery," said Sarbani Basu, a professor of astronomy at Yale, who studies asteroseismology but was not involved in the study, in an interview in Science Daily.  "Being able to find simple patterns and identify the modes of oscillation is game changing.  Since this subset of stars allows normal seismic analyses, we will finally be able to characterize them properly."

Last, I was contacted by a reader regarding last week's post about the presence of iridescence in the fossilized feathers of ancient birds, with a question as to whether this discovery might shed any light on the presence of tetrachromacy in birds.  You probably know that (most) humans are trichromats -- we have three different kinds of color-detecting cones in the retina of the eye, sensitive to blue, green, and red wavelengths.  The combination of these three gives us our perception of color.

Mammals, apparently, descend from animals that were tetrachromats -- they had four different cones, and presumably, a more highly refined sense of color detection than humans have.  But in most mammals, such as dogs, there were mutations that knocked out two of the genes responsible -- similar to the loss of the catnip gene described earlier -- leaving behind two functioning cone types, and poorer color discrimination.

Some humans -- almost all are female -- have a fourth working cone, and are true tetrachromats.  This is undoubtedly why when my wife and I are going out, a common comment from her is, "Seriously?  You think that shirt matches those pants?"  Saying my aesthetic sense, especially when it has to do with sartorial matters, is poorly developed is kind of a massive understatement.

Birds -- at least the species that have been tested -- seem to all be tetrachromats, which may be why so much of their display behavior has to do with flashing bright colors around.  The presence of feather iridescence in birds from 52 million years ago may be an indication that they've been able to do this for a very long time.

It must be said, however, that the record holder for number of different kinds of color-sensitive photoreceptor is the mantis shrimp, which (depending on species) has between twelve and sixteen independent kinds of cones.  You have to wonder what the world looks like to them, don't you?

So that's three quick takes from the world of science.  And thanks to the reader who suggested a post on tetrachromacy -- it's a fascinating subject, well worth a look.  So keep those cards and letters comin'.