Ripples in the cosmic pond

I know I've said this before, so at the risk of ringing the changes on this once too many times: I find it endlessly fascinating how much we can figure out about the universe, sitting here on this little speck of rock circling a mediocre star in the arm of an average galaxy.

Three papers came out last week in Nature Astronomy that each individually might bowl you over with the scale of things; put together, they're kind of staggering. First we have a paper by a team led by Tiantian Yuan, of Australia’s ARC Centre of Excellence for All Sky Astrophysics in 3 Dimensions (ASTRO 3D).  Entitled "A Giant Galaxy in the Young Universe with a Massive Ring," this research looks at a very unusual object -- a collisional ring -- that is eleven billion light years away.

Meaning we're seeing it as it was eleven billion years ago.

"It is a very curious object that we’ve never seen before," Yuan said, in a press release.  "It looks strange and familiar at the same time.  It is making stars at a rate fifty times greater than the Milky Way.  Most of that activity is taking place on its ring – so it truly is a ring of fire."

"The collisional formation of ring galaxies requires a thin disk to be present in the ‘victim’ galaxy before the collision occurs," added Kenneth Freeman of the Australian National University, who co-authored the paper.  "The thin disk is the defining component of spiral galaxies: before it assembled, the galaxies were in a disorderly state, not yet recognizable as spiral galaxies.  In the case of this ring galaxy, we are looking back into the early universe by eleven billion years, into a time when thin disks were only just assembling.  For comparison, the thin disk of our Milky Way began to come together only about nine billion years ago.  This discovery is an indication that disk assembly in spiral galaxies occurred over a more extended period than previously thought."

Yes, you read that right.  The images of this object are pictures of something that existed two billion years before the Milky Way formed.

The second paper is about an object that is even older and father away than the ring galaxy.  Titled "A Cold, Massive, Rotating Disk Galaxy 1.5 Billion Years After the Big Bang," by a team led by Marcel Neeleman of the Max Planck Institute for Astronomy, is estimated to be 12.3 billion light years away -- so this structure is not only the oldest disk galaxy ever observed, it also gives us incredible new data on the way galaxies in general form.


Massive disk galaxies like the Milky Way are expected to form at late times in traditional models of galaxy formation, but recent numerical simulations suggest that such galaxies could form as early as a billion years after the Big Bang through the accretion of cold material and mergers.  Observationally, it has been difficult to identify disk galaxies in emission at high redshift in order to discern between competing models of galaxy formation...  The detection of emission from carbon monoxide in the galaxy yields a molecular mass that is consistent with the estimate [that the galaxy's mass is] about 72 billion solar masses.  The existence of such a massive, rotationally supported, cold disk galaxy when the Universe was only 1.5 billion years old favours formation through either cold-mode accretion or mergers, although its large rotational velocity and large content of cold gas remain challenging to reproduce with most numerical simulations.

So the astrophysicists are going to be sifting through that data for quite some time.

The third, "The Recurrent Impact of the Sagittarius Dwarf on the Star Formation History of the Milky Way," by a team led by Tomás Ruiz-Lara of the Instituto de Astrofísica de Canarias, describes something pretty amazing about our own galaxy; the main disc is orbited by a dwarf galaxy (the Sagittarius Dwarf in the title) which has an elliptical orbit, so it at regular intervals pierces the disc of the Milky Way -- causing eddies that trigger a huge spike in star production.

"You have the Milky Way in equilibrium, mostly calm, and then when Sagittarius passed it was like throwing a stone in a lake," said Ruiz-Lara, in an interview with New Scientist.  "It created these ripples in the galaxy’s density, so some areas became more dense and started forming stars more efficiently...  Maybe without Sagittarius the solar system wouldn’t exist.  The timing works out, but there is no way for us to know for sure." 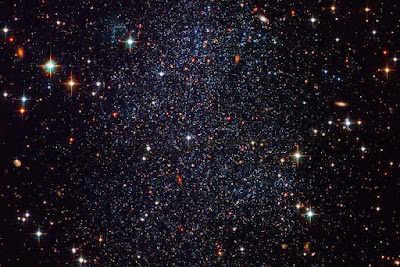 [Image is in the Public Domain courtesy of NASA, ESA, and The Hubble Heritage Team STScI/AURA]

Gradually the dwarf galaxy is losing energy and its orbit is pulled in tighter and tighter, making these collisions and bursts of star formation more frequent.  "It’s getting closer and closer, little by little over time, and in the end it will merge with the Milky Way," Ruiz-Lara said.

Not to worry, that won't happen for another billion-odd years.  So no need to run and see if your stellar collision insurance is paid up.

It's kind of mind-boggling when you think about it, that a bunch of primates who were not so long ago loping around on the African savanna trying not to get eaten by lions have found a way to see into the farthest reaches of the universe.  Not to get cocky about it, but that's pretty spectacular.  Only a hundred years ago we didn't even know for sure how big or how old the universe is; today we're looking into the depths of space, and back in time almost as far is is physically possible.

It brings to mind the wonderful quote by Carl Sagan: "We are a way for the cosmos to know itself."