One of the things I love about writing daily here at Skeptophilia is that my long-time readers are constantly on the lookout for good topics.  One of my regular contributors, not to mention a dear friend, is the inimitable novelist K. D. McCrite, best known for her charming cozy mysteries and her fall-out-of-your-chair-funny young adult series The Confessions of April Grace.  K. D. and I were chatting a couple of days ago, and she asked me if I had ever heard of the phenomenon of stairs in the forest.

I told her I hadn't.

"Oh, yes," K. D. told me.  "Apparently it's a big thing.  You're out there in the woods, far away from everything, and you happen unexpectedly upon a set of stairs that goes nowhere.  No building, nothing nearby."

She told me that the aficionados claimed it was some kind of portal to another dimension.  "Supposedly it's connected with hikers going missing and other such spooky stuff."  She then sent me a couple of videos about the phenomenon. 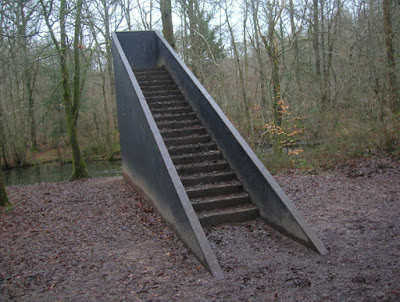 If you want to take a look for yourself, the videos are here and here, and are worth watching just for the creepy photographs.  The general upshot of the videos is "there's this thing we've found in the woods and we don't know why it's there, so alien abductions and time slips and general scary shit."

Whatever the origin of the staircases, it's always a little spooky to find something in the woods you weren't expecting.  I still remember the inexplicable thrill of fear I felt when my wife and I were on a late October hike in our nearby national forest a few years ago, and I found something odd -- a Mardi Gras mask, in perfect condition, sitting on a log.  It looked like it'd just been placed there; it was in pristine condition, and wasn't even damp.  It was a cool, cloudy day, and we hadn't seen a single other person out there, which made it doubly bizarre. 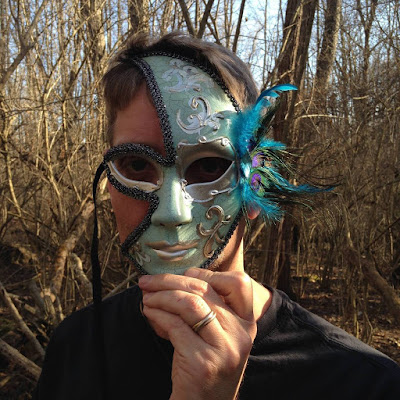 Carol looked at me for a moment, and then said, "You know, if you were a character in one of your own novels, you'd be about to die right now."

Anyhow, I didn't die, or even get possessed by an evil spirit or anything.  So I brought it home, and hung it on the wall in my office.

The next morning when I came in, the mask was in the middle of the floor.

After doing a double take, and then getting my heart rate back to normal, I ascertained that the strap had come loose.  So I put the strap back on, rehung it, and it's been there quietly ever since then.

Probably just waiting for an unguarded moment to jump on me and glue itself to my face and take over my soul.  You know how haunted masks are.

The staircase-in-the-woods thing is certainly atmospheric and creepy, although K. D. and I are in agreement that if we saw one, we'd immediately climb up to the top.  This would be inadvisable, according to one witness:


This is... probably the weirdest story I have.  Now, I don't know if this is true in every SAR [search-and-rescue] unit, but in mine, it's sort of an unspoken, regular thing we run into.  You can try asking about it with other SAR officers, but even if they know what you're talking about, they probably won't say anything about it.  We've been told not to talk about it by our superiors, and at this point we've all gotten so used to it that it doesn't even seem weird anymore.  On just about every case where we're really far into the wilderness, I'm talking 30 or 40 miles, at some point we'll find a staircase in the middle of the woods.  It's almost like if you took the stairs in your house, cut them out, and put them in the forest.  I asked about it the first time I saw some, and the other officer just told me not to worry about it, that it was normal.  Everyone I asked said the same thing.  I wanted to go check them out, but I was told, very emphatically, that I should never go near any of them.  I just sort of ignore them now when I run into them because it happens so frequently.

People who come across these lone staircases frequently feel "an unaccountable sensation of dread," and folks who have climbed them have come back down to find that several hours have passed, when it only felt like a few minutes.

That's... if they're ever seen again.

Now, as you might expect, I think there's a prosaic explanation here, or more likely, several of them.  The more pristine-looking ones, such as the one in the photograph above, could be observation platforms.  I've seen this sort of thing in a lot of places, especially areas known for their wildlife viewing.  The more dilapidated ones are probably the remnants of wood-frame houses with stone stairs, left behind when the wooden parts rotted away.  (Hiking with my brother-in-law in rural Massachusetts, we've come across a good many old house foundations -- one of which was the inspiration for my creepy story "The Cellar Hole.")  Some of the ones pictured in the video looked like they were simply steps that had been built into a steep hillside, and so not "going nowhere" at all.  Others appeared to be what was left of bridges or overpasses that had caved in.  Some could well be there because someone thought it'd be fun to create a mystery in the woods, like the little footbridge over nothing out in a flat open field near where my son used to live in Palmyra, New York.

That doesn't mean that if I came across one, I wouldn't be a little weirded out, especially now that I've been primed to think about Scary Stuff when I see one.  I still am pretty sure I'd climb it, because when might I have another opportunity to be abducted by aliens?

But sadly, I've never seen anything like this, despite the fact that when I was in my twenties and thirties, I spent damn near every summer back-country camping in the Cascades and Olympics.  The weirdest thing I saw out there was a random boardwalk in the middle of nowhere across a place called Ahlstrom's Prairie, where you're hiking through dense Douglas fir forest and suddenly come out into an open field bisected by a wooden boardwalk.  The effect is startling, a sudden reminder of humanity in a place out in the wilderness where you can spend a week and not see a single other person.

Of course, there's a reason for the boardwalk in Ahlstrom's Prairie: Ahlstrom, who built the thing and lived in a cabin nearby in the early part of the 20th century.  And the Parks Service that keeps it in good shape.  But it's an atmospheric place, and on my many hikes down it on the way to the mouth of the Ozette River, I always found it to be a little spooky, especially on a foggy day (pretty common in western Washington).

So I'm not going to jump to any paranormal explanations for the staircases in the woods, at least not till I experience a time slip myself.  But my thanks to my pal K. D. for suggesting the topic, which (despite all my inquiries into the supernatural over the past ten years) I'd never even heard of.

But I should wrap this up, because that mask hanging on my wall is whispering to me again, and I am compelled to do its bidding.  You know how it goes.