The idea here is that something (usually a benevolent deity) fine-tuned the universe in just such a way to be hospitable for us -- for having forces perfectly balanced to hold matter together without causing a runaway collapse, for having gravitational pull strong enough to form stars and planets, for having electromagnetic forces of the right magnitude to generate the chemical reactions that ultimately led to organic molecules and life, and so on.

To me, this argument ignores two awkward facts.  First, of course our universe has exactly the right characteristics to generate and support life; if it didn't, we wouldn't be here to consider the question.  (This is called the "Weak Anthropic Principle," for obvious reasons.)  Second, though -- the Strong Anthropic Principle conveniently avoids the fact that a large percentage of the Earth, and damn near 100% of the universe as a whole, is completely and unequivocally hostile to us, and probably to just about any living thing out there.

It's one of those hostile bits that got me thinking about the whole issue today, because astronomers just last week observed a phenomenon called a fast radio burst in our own galaxy -- a mere thirty thousand light years away -- and the thing that produces it is not only bizarre in the extreme, but is something that we're very, very lucky not to be any closer to.

The beast that produces this is called a magnetar, and appears to be a rapidly-spinning neutron star, with a mass of two to three times that of the Sun but compressed into a sphere only about twenty kilometers in diameter.  This means that the surface gravitational attraction is astronomical (*rimshot*).  Any irregularities in the topography would be crushed, giving it a smooth surface with a relief less than that of a brand-new billiard ball.

The most bizarre thing about magnetars, however, is the immense magnetic field that gives them their name.  Your typical magnetar has an average magnetic field flux density of ten billion Teslas -- on the order of a quadrillion times the field strength of the Earth.  This is why they are, to put it mildly, really fucking dangerous.  The article in Astronomy about last week's discovery explained it graphically (if perhaps using slightly more genteel language):


The magnetic field of a magnetar is about a hundred million times stronger than any human-made magnet.  That’s strong enough that a magnetar would horrifically kill you if you got within about 620 miles (1,000 km) of it.  There, its insanely strong magnetic field would pluck electrons from your body’s atoms, essentially dissolving you.

This brought up a question in my mind, though; magnetic fields of any kind are made by moving electrical charges -- so how can a neutron star (made, as one would guess, entirely of neutrons) have any magnetic field at all, much less an insanely strong one?  Turns out I'm not the only one to ask this question, as I found out when I did some digging and stumbled on the Q-and-A page belonging to Cole Miller, Professor of Astronomy at the University of Maryland.  Miller says the reason is that not all of the particles in a neutron star are neutrons.  While the structure as a whole is electrically neutral, about ten percent of the total mass is made up of electrons and protons that are free to move.  Take those charged particles and whirl them around hundreds of times per second, and you have a magnetic field that is not only insanely strong, but really fucking dangerous.

This all comes up because of last week's observation of a thirty-millisecond-long fast radio burst coming from within our galaxy.  All the others that have been detected were in other galaxies, and the distances involved (not to mention how sporadic they are, and how quickly they're over) make them difficult to explain.  But this comparatively nearby one gave us a load of new information -- especially when a second burst came from the same magnetar a few days later. 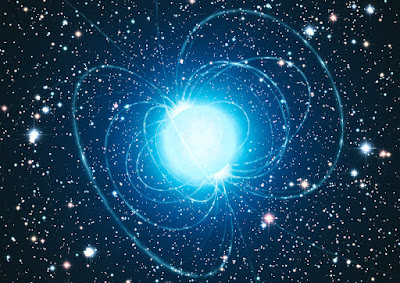 [Image licensed under the Creative Commons ESO/L. Calçada, Artist’s impression of the magnetar in the extraordinary star cluster Westerlund 1, CC BY 4.0]

As this observation was only made last week, astronomers and astrophysicists are still trying to explain it, including odd features such as its relative faintness.  As compared to bursts from other galaxies this one was a thousand times less luminous.  Why is still a matter of conjecture.  Is it because bursts this weak occur in other galaxies, but from this distance would be undetectable?  Is it because the distant galaxies are much younger (remember, looking out in space is equivalent to looking back in time), so stronger bursts only happen early in a galaxy's evolution?  At this point, we don't know.  As Yvette Cendes, author of the Astronomy article, put it:


It is far too early to draw a firm conclusion about whether this relatively faint FRB-like signal is the first example of a galactic fast radio burst — making it the smoking gun to unlocking the entire FRB mystery.  And there are also still many preliminary questions left to answer.  For example, how often do these fainter bursts happen?  Are they beamed so not all radiation is equally bright in all directions?  Do they fall on a spectrum of FRBs with varying intensities, or are they something entirely new?  And how are the X-ray data connected?

As usual with science, the more we know, the more questions we have.

In any case, here we have a phenomenon that's cool to observe, but that you wouldn't want to be at all close to.  Not only do we have the magnetic field to worry about, but the burst itself is so energetic that anything nearby would get flash-fried.

So "the universe is fine-tuned to be congenial to us" only works if you add, "... except for the 99.9% of it that is actively trying to kill us."  Not that this makes it any less magnificent, but it does make you feel a little... tiny, doesn't it?  Probably a good thing.  Humans do stupid stuff when they start thinking they're the be-all-end-all.