Talk to the hand

I used to tease my poor, long-suffering mother because of her habit of talking with her hands.

It wasn't even necessarily when the person she was talking to was physically there in the room with her.  She talked with her hands (well, with one hand) while she was on the phone.

I got my comeuppance when I started teaching, and a student -- more than one, actually -- pointed out my habit of sculpting the air while I was explaining something.  One of them challenged me to deliver a lecture with my hands clasped behind my back.

That lasted approximately two minutes, much to the class's amusement.

So Mom, if you're listening right now, you get the last laugh.  I don't know that I can explain it any better than you did, but if I sit on my hands, I become completely tongue-tied. 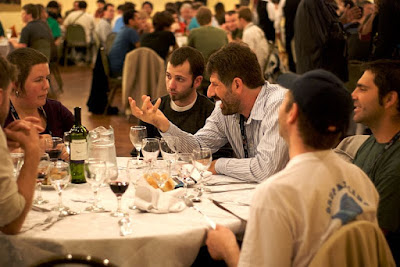 [Image licensed under the Creative Commons Wikimania2009 Beatrice Murch, Talking with the hands, CC BY 3.0]

Apparently it's more or less universal, and the reason may be more than just introducing expressive body language into our conversation.  A study from the University of Connecticut released this week in Proceedings of the National Academy of Sciences found that hand gestures change the quality and intonation of our voices -- therefore communicating subtle information even if the listener can't see what our hands are doing.

In "Acoustic Information About Upper Limb Movement in Voicing," by Wim Pouw, Alexandra Paxton, Steven J. Harrison, and James A. Dixon, we read about a simple experiment -- volunteers were instructed to make a continuous vowel tone ("aaaaaaa....") into a microphone, simultaneously making rhythmic motions with the arms, while listeners in another room tried to synchronize their own arm movements with those of the vocalizers.

The ability to do that was nearly universal, even though the changes in the tonal quality were very subtle.


Co-speech gestures, no matter what they depict, further closely coordinate with the melodic aspects of speech known as prosody.  Specifically, gesture’s salient expressions (e.g., sudden increases in acceleration or deceleration) tend to align with moments of emphasis in speech.  Recent computational models trained on associations of gesture and speech acoustics from an individual have succeeded in producing very natural-looking synthetic gestures based on novel speech acoustics from that same individual, suggesting a very tight (but person-specific) relation between prosodic–acoustic information in speech and gestural movement.  Such research dovetails with remarkable findings that speakers in conversation who cannot see and only hear each other tend to synchronize their postural sway (i.e., the slight and nearly imperceptible movement needed to keep a person upright).

Because the entire skeletomuscular system is connected, movement of the arms and hands alters the shape/position of the chest cavity and throat, creating small changes in our vocal quality.  That, apparently, is enough to convey information to our listener, even if they can't see the gestures.

"Some language researchers don't like this idea, because they want language to be all about communicating the contents of your mind, rather than the state of your body," said study co-author James Dixon. "But we think that gestures are allowing the acoustic signal to carry additional information about bodily tension and motion.  It's information of another kind."

So add this to the long list of subtleties affecting our communications.  I still remember my Intro to Linguistics professor telling us about tonal languages like Thai, in which the pitch and/or pitch changes in vocalizing a syllable change its meaning, and he asked if we thought information in English was altered by changes in tone or stress.  One person came up with the rising pitch at the end of a sentence communicating a question, and increasing stress to indicate emphasis, but that was about it.

"Really?" he said.  "Then tell me why the following all mean something different."  And he read us this list of sentences:
Minor alterations in the way a sentence is uttered can entirely change the meaning of the words.

I guess I shouldn't have picked on my mom for talking with her hands.  Human communication is complex, and what we end up saying to our listeners can depend on a great many things beyond the exact words used.  So be careful how your hand moves when you're talking to a friend on the telephone.

You may be telling them more than you realize.