The return of the senses

The news has been pretty uniformly dismal lately.

I don't even have to list all the ways.  We've all been inundated by the headlines, not to mention how these developments have changed our lives, and it's becoming increasingly clear those changes aren't going away soon.  It's easy to get discouraged, to decide that everything is bleak and hopeless.

So today, I want to look at a new development that should make you feel at least a little better about what humanity can accomplish -- in this case, for people who have been through the devastating experience of losing a limb.

A high school friend of mine was involved in a terrible accident on his family farm and ended up losing both of his arms from the elbow down.  He was fitted with prosthetic arms, and after recovering managed amazingly well -- his courage and fortitude through this ordeal was something that inspired our entire school, and still inspires me to this day.  But his prostheses were no real replacements for lower arms and hands, and there was (and is) a lot he could not do.

Those limitations might soon be a thing of the past.

A collaboration between Chalmers University of Technology, Sahlgrenska University Hospital, the University of Gothenburg, and Integrum AB (a Swedish medical technology firm), the Medical University of Vienna, and the Massachusetts Institute of Technology has produced prosthetic arms for three amputees in Sweden that interface directly with the user's nerves, muscles, and skeletons.  Not only does this mean that the patient has much improved fine motor control over the prosthetic hand, but the nerve connection runs both ways, not only delivering output to control what the hand does, but relaying input received by the hand back to the brain.

Put simply: this prosthesis has a sense of touch.

"Our study shows that a prosthetic hand, attached to the bone and controlled by electrodes implanted in nerves and muscles, can operate much more precisely than conventional prosthetic hands," said Max Ortiz Catalan, who headed the research and was lead author on the paper describing it that appeared last week in the New England Journal of Medicine, in an interview with Science Daily.  "We further improved the use of the prosthesis by integrating tactile sensory feedback that the patients use to mediate how hard to grab or squeeze an object.  Over time, the ability of the patients to discern smaller changes in the intensity of sensations has improved."

The new prostheses, as amazing as they are, are just the first step.  "Currently, the sensors are not the obstacle for restoring sensation," said Ortiz Catalan.  "The challenge is creating neural interfaces that can seamlessly transmit large amounts of artificially collected information to the nervous system, in a way that the user can experience sensations naturally and effortlessly."

It's kind of amazing how fluid the human brain can be.  Neuroscientist David Eagleman, in his brilliant talk "Can We Create New Senses for Humans?", describes our sensory organs as being like the peripherals in a computer system -- and explains how quickly the brain can learn to obtain the same information from a different peripheral.  Some of his examples:
For me, the most stunning thing about these examples is that the brain learns to reinterpret the signals coming from the "peripheral" -- in the first example, sounds activate the visual cortex; in the second, touch stimuli activate the visual cortex; in the third, touch stimuli activate the auditory cortex.  All neural signals are the same; the brain simply decides how to interpret them.  You literally are seeing with your ears, seeing with your tongue, or hearing with your skin.

Here, though, the peripheral really is a peripheral, i.e., a machine.  You're not co-opting one of your pre-existing senses for a different purpose; you're hooking in an external apparatus to your brain, receiving input from an array of computerized sensors.  You may have been reminded, as I was, of Luke Skywalker: 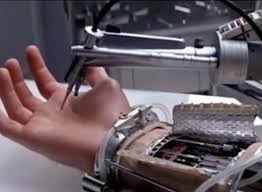 It's a phenomenal improvement over previous prostheses, that were moved by muscle contractions in the arm it was attached to; here, the prosthesis is not only mind-controlled, it sends information back to the brain about what it's touching, giving the wearer back at least the beginnings of a sense of touch.

"Right now, patients in Sweden are participating in the clinical validation of this new prosthetic technology for arm amputation," said Ortiz Catalan.  "We expect this system to become available outside Sweden within a couple of years, and we are also making considerable progress with a similar technology for leg prostheses, which we plan to implant in a first patient later this year."

So the news these days isn't all bad, even if you have to dig a bit to find the heartening parts.  Regardless of what's happening now, I remain an optimist about human compassion and human potential.  I'm reminded of the final lines of the beautiful poem "Desiderata" by Max Ehrmann: "With all its sham, drudgery and broken dreams, it is still a beautiful world.  Be cheerful.  Strive to be happy."