Given the right context, people tend to be cooperative.

That's the gist of a study out of the University of Texas - Austin this week, called, "Prosocial Modeling: A Meta-analytic Review and Synthesis," by Haesung Jung, Eunjin Seo, Eunjoo Han, Marlone Henderson, and Erika Patall.  If behavior is characterized as helpful to others -- such as wearing a mask during a pandemic -- it triggers similar prosocial behavior in those who witness it. 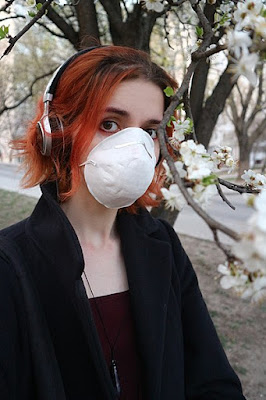 "Just like the deadly virus, cooperative behavior can also be transmitted across people,” said Haesung Jung, lead author of the study, in a press release.  "These findings remind the public that their behavior can impact what others around do; and the more individuals cooperate to stop the spread of the disease, the more likely others nearby will do the same...  We found that people can readily improvise new forms of prosocial actions.  They engaged in behaviors that were different from what they witnessed and extended help to different targets in need than those helped by the prosocial model."

It's unsurprising, given that we're social primates, that we're influenced by the behavior of those around us.  Not only do we learn by imitation, there's the tendency -- often nicknamed "peer pressure" -- to pick up behaviors, good or bad, from our friends and acquaintances, usually for reasons of group acceptance and fitting in.  I vividly remember being a graduate student at the University of Washington, where my classmates were some of the most foul-mouthed, snarky, hard-drinking folks I've ever been around.  They weren't bad people, mind you; but it definitely was the intellectual version of a "rough crowd."  It took very little time for me to adopt those behaviors myself.  We tend to conform to the norm for the group we belong to.

(Yes, I know, I still swear a lot.  I swore even more then, hard though that may be to imagine.  Like I said -- rough crowd.)

So the results of the Jung et al. study make sense.  Get the ball rolling, she suggests, and the influence we have over the people we associate with can cause an increase in the overall prosocial behavior of the group.

The example the paper focuses on -- the wearing of masks during the COVID-19 pandemic -- isn't as simple as that.  This isn't simply a case of enlightened people who understand risks wearing masks and waking up the uninformed, or at least encouraging them to behave in a socially responsible manner.  Simultaneously we have a group of people who are consciously and deliberately using the same tribal tendencies to stop people from wearing masks.  From the very beginning of the pandemic, we have had Fox News bombarding their listeners with the following messages:
Just this morning I saw a post on social media of the "Meh, why worry?" variety, to the effect that Woodstock happened right in the middle of the Hong Kong flu epidemic, and that didn't stop people from partying.

Which may well be true, but doesn't make it smart.

So we've got a "news" outlet deliberately downplaying the danger, and worse, making it look like a conspiracy to bring down Dear Leader.  The result is that wearing masks isn't seen as prosocial, at least amongst Fox viewers; it's seen as falling for the lies of the Democrats, and thus betraying Donald Trump and everything the GOP stands for.

This kind of thinking is remarkably hard to counteract, because the Fox mouthpieces -- people like Sean Hannity, Tucker Carlson, and Laura Ingraham -- started out by training their listeners to disbelieve the facts.  The administration quickly picked up on this strategy, starting with Kellyanne Conway's infamous "alternative facts" comment, and it has proven wildly successful, if you can characterize getting a significant slice of the American public to trust nothing but the party line as "success."

As I've pointed out before, once you get people to mistrust the hard evidence itself, you can convince them of anything.

So the problem with mask-wearing in the United States is that it isn't universally being seen as a compassionate protective measure, it's seen as being a dupe.  Besides the "how others are seeing our actions" factor that Jung et al. focused on, there's "how we see ourselves" -- and if we've been trained that a behavior is going to make us look like a gullible sucker, that's going to counteract the positive forces of prosocial modeling.  (Especially if the training has included a message that the risk the behavior is supposed to protect us from doesn't exist in the first place.)

Yes, we're motivated to be compassionate and protect the people around us.  But the ugly side of tribalism is equally powerful, and we now have a group of people in charge who are callously choosing their tactics to exploit those tendencies, with the end of gaining power and money.

Until we can stop the disinformation and propaganda, the kind of prosocial modeling Jung et al. describe is unlikely to have much effect.