It's been a good while since I've written a post about a story that's just plain loony.

Maybe it's because here in the United States, it's not so funny any more because the loonies appear to be in charge of the place, led by a man who spent ten minutes in an interview bragging about how he had successfully passed a test to detect dementia.  ("The doctors were amazed," he said.)

But yesterday I ran into a story that was so completely wacky that I would be remiss in not bringing it to your attention.  As with so many strange things lately, it began on TikTok, the bizarre social media site wherein people upload short videos of themselves doing dances or singing songs or whatnot.  Me, I don't honestly see the point.  It was ages before I was even willing to get on Instagram, and mostly what I do there is upload photographs of my dogs, my garden, and stuff about running.  (If you want to see pics of my dogs etc., you can follow me @skygazer227.)

Be that as it may, TikTok is wildly popular.  It has remained popular despite allegations that the app contains some kind of spyware from China.  TikTok users have been credited with reserving hundreds of seats at Donald Trump's Tulsa rally and then not showing up.  And apparently, it is also the host of a "vibrant witch community," which is called, I shit you not, "WitchTok."

But this is where things start to get a little weird.  Because a rumor started to circulate on "WitchTok" that a group of "baby witches" had put a hex on the Moon. 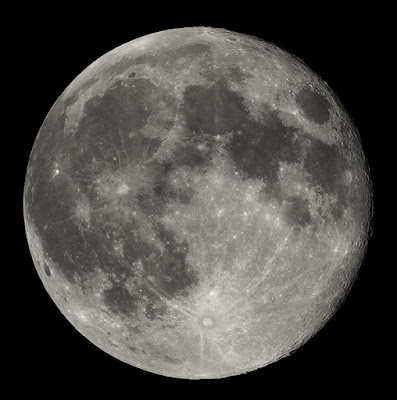 It's unclear how the rumor got started, but once it did, it gained a life of its own, spreading to those estimable conduits for bizarre bullshit, Twitter and Reddit.  When the elder witches who were panicking about the thing tried to find out who these alleged "baby witches" were, they were unsuccessful.

For most of us, this would have been sufficient to conclude that there was nothing to the rumor, and to say, "Ha-ha, what a silly thing I almost fell for, right there."  But no.  The apparent absence of the "baby witches" could only mean one thing, they said: the hex on the Moon had backfired and killed all the "baby witches."

Well, with all the "baby witches" dead, surely that would put an end to it, right?  If you believe that, you don't know how social media works.  This made the rumor spread faster, with other witches claiming that they were the ones who'd hexed the Moon, not the "baby witches," and next they'd go after the Sun.  Some said that not only was the Moon hexed by these evildoers, but so were the "fae," the non-human denizens of fairyland, and admittedly this would be a pretty nasty thing to do if the fae actually existed.  One Twitter user, @heartij, cautioned that all this was walking on some pretty thin ice.  "Upsetting deities is the last thing any rational practitioner would want to do," they said, and I can't disagree with that, although none of this seems to have much to do with anything I'd call "rational."

@heartij added rather darkly, "the people behind the hex are more than likely being handled accordingly."

Others said that there was nothing to worry about, that the Moon was perfectly capable of withstanding being hexed, and that everything would settle down once the stars went into a better alignment.  "The Moon is a celestial being which controls us," said Ally Cooke, a trainee priestess.  "We’re currently in a new Moon that takes place in the sign of Cancer, which explains why so many practicing witches report disconnects with the Moon or personal odd feelings, but they’re confusing them with evidence for malpractice.  This new Moon is centered around releasing, and Cancer is a water sign, so emotions are running high at this time."

Makes perfect sense to me.

My first inclination upon reading this was to point out that through all this, the Moon has continued to circle around the Earth completely unchanged, and in fact not even looking a little worried.  But upon reading a bunch of the posts from WitchTok members and commenters on Reddit and Twitter, it became apparent that they're not saying anything physical has happened to the Moon.  It's all just invisible "bad energies" and "negative frequencies" aimed in the Moon's general direction.  But my question is -- forgive me if I'm naïve -- if (1) the hex itself operates by some mechanism that is invisible, and (2) it hasn't had any apparent result, how do you know it happened?

I guess we're back to "personal odd feelings."  For whatever that's worth.

Anyhow, that's today's dip in the deep end of the pool.  Me, I find it a refreshing change of pace from stories about elected officials who studied at the Boss Tweed School of Ethics and a president who thinks you get extra points for successfully saying "person, woman, man, camera, TV" from memory.  Compared with that, witches trying to stop other witches from aiming invisible hexes at distant astronomical objects is honestly a welcome diversion.