Black as the night

You wouldn't think that fish living three miles deep in the ocean, far beneath the level that sunlight can penetrate, would worry much about being seen.

Well, I'm not sure they're worried, exactly.  But they still have the problem that if they do somehow get seen, they're likely to get eaten.

This lies at the heart of the reason that bioluminescence exists in the deep ocean.  You probably know that bioluminescence is the ability of some organisms to use chemical reactions in their bodies to emit light.  (Fireflies are a common example.)  In the deep ocean, it was thought the main reason animals might do this is to create a lure; the illuminated "fishing pole" of the grotesque angler fish brings in curious smaller fish, which then get turned into lunch. 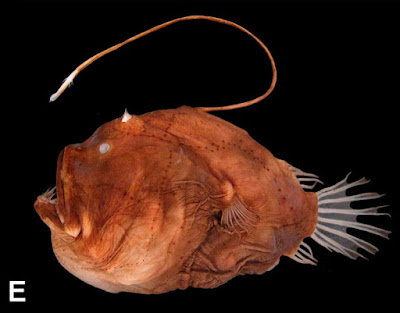 There are other functions for light-emitting structures besides lures.  Squid that live in shallow water have ink they squirt into the water then they're attacked, creating a dark cloud to confuse the predator, thus allowing the squid to escape.  But if you live at a depth where its perpetually dark, black ink is fairly useless; so there are deep-sea squid that emit luminescent ink, creating a burst of light to startle the predator and give the would-be dinner a chance to live for another day.

Last week in Current Biology, though, there was a paper wherein I learned about another reason for bioluminescence in the deep ocean.  In "Ultra-black Camouflage in Deep-Sea Fishes," by Alexander L. Davis, Sönke Johnsen, and Karen J. Osborn (Duke University), Kate N. Thomas (The London Museum of Natural History), Freya E. Goetz (Smithsonian National Museum of Natural History), and Bruce H. Robison (Monterey Bay Aquarium Research Institute), we read about fish like the evocatively-named fangtooth, Pacific blackdragon, and black swallower, whose skin is amongst the blackest naturally-occurring substances, reflecting less than 0.5% of the light the falls on it.

But as with the squid ink, why bother to evolve such dark skin if there's no light there to reflect?  The answer turns out to be that there is light there to reflect; the bioluminescence emitted by other predatory fish.  If you're in the complete darkness, even the reflection of a tiny amount of light from your body might give away your position.  So this is a third reason for deep-sea bioluminescence; not as a lure, nor a distraction, but as a searchlight.

These fish, however, are so dark that even in bright sunlight they look like black silhouettes, as study co-author Karen Osborn found out when she tried to photograph them.  This confers a significant advantage over other fish, even if there's only a marginal difference in the skin blackness.  The authors write:

I've read that we know less about the abyssal regions of the ocean than we do about the surface of the Moon.  I don't know if that's true -- it's a little hard to quantify what we don't know about something -- but what's certain is that the deep ocean harbors some astonishingly weird creatures.  I'll end with a quote from H. P. Lovecraft, in whose writings the ocean represents everything that is dark and mysterious about the universe: "But more wonderful than the lore of old men and the lore of books is the secret lore of ocean...  The process of delving into the black abyss is to me the keenest form of fascination."