Blink of an eye

I know I often write about strange and unexpected discoveries out there in the universe in the context of how much more we have to learn, but even by those standards, the discovery announced by astrophysicists at the Massachusetts Institute of Technology this week was bizarre.

Most everyone knows about black holes -- stellar remnants that have collapsed to a density that they warp space/time into a closed surface.  The usual way this is put is that their gravitational pull is so strong even light isn't fast enough to escape, but that's not really that accurate; light is massless and therefore photons exert (and feel) no gravitational pull.  However, they are constrained to follow the lines of space/time they're traveling through, just as cars can take whatever road their drivers choose, but are still constrained to stay on the surface of the Earth's sphere.

Around a black hole, the fabric of space is so distorted that it's a bit like an infinitely-deep well.  Once inside the black hole's event horizon, there's no escape.  Weirder still, since not only space but time is affected by such a mass, to an outside observer watching an object falling into a black hole, it would seem to take an infinite amount of time.  The closer it got, the slower it would move, until it finally paused, forever, on the surface of the event horizon.  (Due to the vagaries of general relativity, this wouldn't help the hapless space traveler falling into a black hole.  Time would run at the regular speed for him/her, and in a very finite amount of time, the spaceship and everything and everyone in it would get ripped to shreds by the tidal forces exerted by the black hole's mass.) 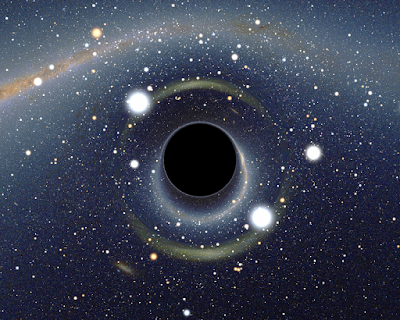 It's this last bit that's germane to this week's announcement.  Black holes are black (duh), even light can't escape, so how do we see them?  It's because of material that's falling toward them.  Black holes tend to form accretion disks of stuff circling the central singularity at a high rate of speed, and the acceleration of this disk causes it to emit x-rays.  (In fact, the first black hole ever observed, Cygnus X-1, was given that name because it was the first x-ray source found in the constellation Cygnus.)

So we see the black hole by its brilliant x-ray "corona."  Generally, the larger the black hole, the bigger the accretion disk and the brighter it is; the center of the Milky Way, the object called Sagittarius A*, has a radius of 22 million kilometers, and parts of its accretion disk are being whirled about at thirty percent of the speed of light.

1ES 1927+654 is another such supermassive galactic nucleus, but its behavior is even weirder than our own.  In March 2018 it flashed -- its luminosity suddenly jumped by forty percent.  Keep in mind that these things are already phenomenally luminous, so such a jump is stupendous by anyone's estimate.  "This was an AGN [active galactic nucleus] that we sort of knew about, but it wasn't very special," said MIT astronomer Erin Kara.  "Then they noticed that this run-of-the-mill AGN became suddenly bright, which got our attention, and we started pointing lots of other telescopes in lots of other wavelengths to look at it."

Put more accurately, it became undetectable.  Something had apparently vaporized its corona completely, causing the x-ray emissions to stop.  The most amazing thing is how fast it happened -- an astronomical blink of an eye.  "We expect that luminosity changes this big should vary on timescales of many thousands to millions of years," said Kara.  "But in this object, we saw it change by 10,000 over a year, and it even changed by a factor of 100 in eight hours, which is just totally unheard of and really mind-boggling."

Here's what they think happened.

Something disrupted the accretion disk, possibly a large star that got caught in the black hole's gravitational well and was shredded by tidal forces as it approached.  That's a lot of material to throw into the accretion disk at once, and the star's own gravity destabilized the disk.  As an analogy, imagine a small whirlpool, like water going down a drain.  If you pour something like a dye into it slowly, it gets pulled in and incorporated smoothly.  But drop a gallon of dye into the whirlpool suddenly, and it disrupts the whirlpool completely, turning it into turbulent chaos.

The astronomers believe that the black hole's luminosity will "turn back on" as material around it begins to whirl around again, but the honest truth is that no one knows what it'll do next.  "We want to keep an eye on it," Kara said.  "It's still in this unusual high-flux state, and maybe it'll do something crazy again, so we don't want to miss that."

So that's our "you thought outer space was weird before" story for today.  Once again illustrating that we really are only on the beginning of our journey toward understanding the universe we live in.  If you keep your eyes on the stars, you will never lack for something to fascinate and startle you.