Humans have been keeping pets for a very long time.

A lot of it now is companionship, and I have to admit that despite Guinness having to play fetch-the-tennis-ball for several hours a day so he runs off enough energy that he won't get fidgety and eat the sofa, he's kind of entertaining to have around.  The thought is that dogs probably began the human/canine relationship as fierce and loyal guardians of home and hearth, and from there moved into closer emotional links, ultimately giving rise to phenomena like pugs wearing knitted sweaters with matching stocking caps.

Cats, on the other hand, aren't much good at home security, and at first were most likely kept around as mousers.  It must be said, however, that all of the cats I've owned were kind of non-starters as mousers.  They mostly specialized at sitting around looking bored, only moving when the block of sunshine they were occupying had the nerve to go somewhere else.  In my experience, they were more like dubiously-useful home décor items that pooped in a box in the laundry room.

Still, the human/feline association goes back a long way as well.  Back in 2017 a study at the Jacques Monod Institute in Paris used mitochondrial DNA from both ancient cat skeletons and modern cats to show that people were bringing cats with them when they migrated as long ago as 4,500 B.C.E.  The researchers used the frequency of the "blotched tabby" allele -- a gene that causes cats to have swirls of color in their coats instead of parallel stripes -- followed human migration patterns throughout the Middle East and Europe, making cat genetics a useful tool in determining where their human owners traveled. 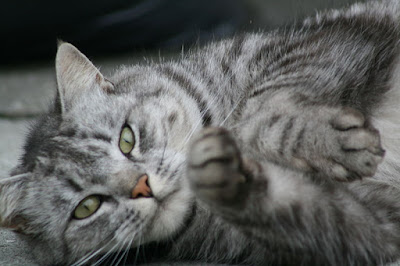 This wasn't the first study to connect cat genetics with human migration.  All the way back in 1977, an article in Scientific American by Neil Todd showed that the polydactyly gene -- which gives cats six toes per foot -- jumped from colonial New England to Nova Scotia and New Brunswick after the British lost the Revolutionary War.  A lot of Loyalists went to Canada and apparently brought their six-toed cats with them, creating pockets of high frequency of that allele in areas where the Loyalists ended up.

In 2005 a study appeared in the Journal of Heredity that created a family tree for 32 different cat populations, focusing particularly on cats in Arkansas and Tennessee, and found that the genetics of domestic cats was consistent with the genetics of whoever settled the area -- that places predominantly settled by people of Scottish descent, for example, still today have cats that are more closely related to their Scottish cousins than to cats in France or Switzerland.  It's kind of fascinating to think that our kitties here in the United States have their own migration patterns, from the Middle East to Europe to America, and that the routes they took are the same ones followed by their human owners.

The reason all this comes up is a study that showed up this week in Nature Scientific Reports called "The Earliest Domestic Cat on the Silk Road," by a team led by A. F. Haruda of the University of Exeter.  In it we find that pet cats -- not just practical semi-feral barn cats -- were being kept by Kazakh pastoralists a thousand years ago.


We present the earliest evidence for domestic cat (Felis catus L., 1758) from Kazakhstan, found as a well preserved skeleton with extensive osteological pathologies dating to 775–940 cal CE from the early medieval city of Dzhankent, Kazakhstan.  This urban settlement was located on the intersection of the northern Silk Road route which linked the cities of Khorezm in the south to the trading settlements in the Volga region to the north and was known in the tenth century CE as the capital of the nomad Oghuz.  The presence of this domestic cat, presented here as an osteobiography using a combination of zooarchaeological, genetic, and isotopic data, provides proxy evidence for a fundamental shift in the nature of human-animal relationships within a previously pastoral region.  This illustrates the broader social, cultural, and economic changes occurring within the context of rapid urbanisation during the early medieval period along the Silk Road.

The study looked at an amazingly complete cat skeleton that was buried beside a trade route.  What was remarkable was that the cat had apparently had a rough life -- it had several broken bones -- but those bones had healed, meaning it had been cared for post-injury.  Isotopic analysis of its bones showed that it had a very high protein diet, suggesting it was fed by humans rather than foraging on its own.  Toward the end of its life, it lost most of its teeth, so the fact that its diet remained good throughout is a pretty good indicator that someone was caring for it as a prized pet.

We often associate reverence for cats with the ancient Egyptians, but it's clear they weren't the only ones who held our feline friends in high regard.  We've been fond of our companion animals for a very long time, and wherever we go, they do.

Which I think is pretty sweet.  Even if they're only useful as décor.