In 1960, Carl Jung coined the term synchronicity in his book of the same name, and defined it as follows:


How are we to recognize acausal combinations of events, since it is obviously impossible to examine all chance happenings for their causality?  The answer to this is that acausal events may be expected most readily where, on closer reflection, a causal connection appears to be inconceivable...  It is impossible, with our present resources, to explain ESP [extrasensory perception], or the fact of meaningful coincidence, as a phenomenon of energy.  This makes an end of the causal explanation as well, for "effect" cannot be understood as anything except a phenomenon of energy.  Therefore it cannot be a question of cause and effect, but of a falling together in time, a kind of simultaneity.  Because of this quality of simultaneity, I have picked on the term "synchronicity" to designate a hypothetical factor equal in rank to causality as a principle of explanation.

Synchronicity is a peculiar thing, and when it happens to us it can be extremely startling.  I recall going to a doctor's appointment one day, and in the car I was listening to a station that plays classical music.  When I arrived I was in the middle of the first movement of Beethoven's Moonlight Sonata, a piece I love -- but I was right on time for the appointment and couldn't sit and listen to the rest of it.

So I shut the engine off, got out of my car, and went into the doctors' office.  I checked in, went to the waiting room...

... and over the speakers came the ethereal notes of the piano playing the first movement of the Moonlight Sonata, picking up almost exactly where I had left off five minutes earlier.

This would have been surprising but not really all that peculiar if they had simply been tuned to the same station on Sirius-XM satellite radio as I was; but they weren't.  As I found out from sitting there for the next half hour (just because I was on time for my appointment doesn't mean the doctor was), the music being piped in was just a collection of "atmospheric piano music" for waiting rooms and the like.  The fact that it seemed to pick up exactly where I'd turned the radio in my car off was pure coincidence.

Or, if you like Jung's term, synchronicity.  I'm wary of it for two reasons.  First, it immediately turns on our conviction that occurrences like this Mean Something, that it was more than simple random chance at work.  Second, this kind of magical thinking is at the heart of dart-thrower's bias -- our tendency to notice (or overemphasize) the hits and ignore the misses.  In this case, all of the millions of times I've walked into a waiting room or elevator or grocery store and the speakers weren't playing a tune I was just listening to or thinking about.  All of that randomness gets subsumed into the background white noise of life.  I only noticed it this time, and remembered it afterward, because the music I heard was unexpected in some way.

The reason this comes up is because of an article at Insider about a phone app called "Randonautica," which takes the concept of synchronicity to new levels.  What the app does is to give you a random set of coordinates within a ten minute drive of your home, and then acts as a GPS to get you there.  Before you leave, you're supposed to "set an intention" -- something you want to find or learn when you arrive -- with the expectation that at the site, you'll discover something relevant to that intention.

Various "Randonauts" have reported all sorts of things -- creepy abandoned buildings, unexpected beautiful spots hidden away from view, cryptic graffiti on walls that seemed in some way to connect to the seekers' intention, and so on.  One group had a horrifying experience; Randonauts in Seattle stumbled upon a suitcase that contained human remains in a plastic garbage bag.

Now, I'm not trying to rain on anyone's parade (although finding a dead body certainly would quell my enthusiasm for the whole enterprise).  I can see how Randonautica could be a great deal of fun, and in fact, it's related in spirit to a hobby my wife and I both participate in, geocaching.  But it's an interesting question to consider whether what the Randonauts are finding is meaningful.

My take on it is that sure, it's meaningful, but the meaning is something the Randonauts are imposing upon what they find.  Put another way, there's nothing mystical to this; if you go to a strange place and look for something, with the only criterion being that it has to be relevant to a broad intention to "find something strange," then you're almost certain to succeed.  I can pretty much guarantee that no matter where you go, if you look for weird and unexpected stuff, you'll find something.

But that's just me being a hyperrational type, and there are people who absolutely swear by synchronicities that even I would find a little hard to explain as dart-thrower's bias.  Jung, for example, told the story of a patient who had a vivid dream of a golden scarab beetle, and asked him what relevance it had to her life.  While she was telling him this, he heard a noise, and saw there was an insect trying to get out of the window -- and reached out his hand and caught it.  Guess what it was?  He handed the shining green-gold beetle to the patient, and said, "Here is your scarab."

"This experience punctured the desired hole in her rationalism and broke the ice of her intellectual resistance," Jung wrote.  "The treatment could now be continued with satisfactory results." 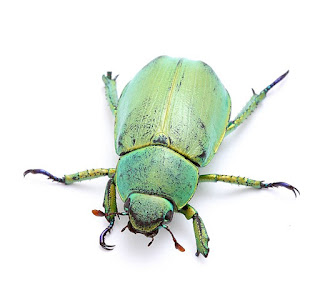 So who knows?  Maybe there's more to this than I'm seeing.  I'd encourage you to try Randonautica if you're so inclined, and let me know if anything untoward happens.  I may well do the same -- although I wonder what would happen if your intention contains the subclause, "... but there's probably nothing mystical going on here."