When I was an undergraduate at the University of Louisiana, I and several of my friends were blown away by the original series Cosmos, written and narrated by Carl Sagan.

Monday mornings, we gathered in the student lounge, eagerly discussing whatever mind-blowing filigree of physics had been the subject of that week's episode.  I still recall one of the ones that made the biggest impression on me -- the tenth episode, "The Edge of Forever," which included, among many other things, wonderful simulations of the motion of stars within a galaxy, and what happens when two galaxies collide.  (You can watch a clip of it here.)  The simulations were (at the time) state-of-the-art, and certainly enough to blow the mind of a sophomore physics student like myself; what struck me most was that galaxies aren't rigid, and their constituent stars don't "hang together," but move independently around the massive black hole at the galactic core.  This can settle down into a shape that seems pretty stable -- such as the spiral pattern of the Milky Way -- or it can destabilize, flinging stars out into space, exploding the galaxy and scattering its pieces across hundreds of thousands of light years.

Sagan, of course, put it best: "A galaxy is a fluid made of a billion suns, all bound together by gravity."

When galaxies collide, it disrupts both completely; at the same time, collisions between the stars themselves are extremely uncommon.  However big the stars are, they're still minuscule with respect to the galaxies that contain them.  It's like the atoms writ large, isn't it?  The seemingly solid matter around you is made up of tiny charged particles interacting through the force of electromagnetism, but in between those particles is... nothing.  Matter is mostly empty space, and only seems solid because you're feeling the mutual repulsion of the electrons in your fingers and the electrons on the surface of whatever you're touching.  Likewise, most of interstellar space is very close to nothing, and the galaxies themselves are made up of particles (stars) interacting through a different force (gravity), and separated by vast, empty voids.

Makes you almost think that the pagans might have been on to something with their dictum of "As above, so below." 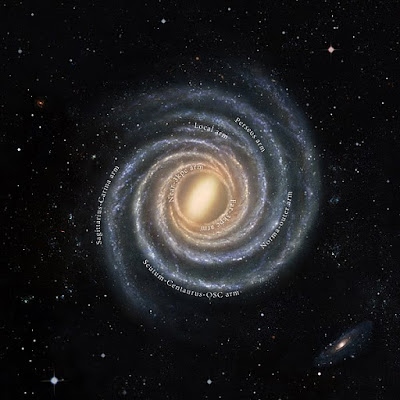 Map of the Milky Way, as it would look from above the galactic disk [Image licensed under the Creative Commons 鄭興武和馬克 裡德（Mark J. Reid）銀河系棒和旋臂結構遺產性巡天(BeSSeL)項目組/南京大學/哈佛-斯密松天體物理中心., Milky Way large, CC BY-SA 4.0]

This topic, and my reminiscences of Cosmos, come up because of a paper in Nature Astronomy last week called "Evidence for a Vast Prograde Stellar Stream in the Solar Vicinity," by a team led by astronomer Lina Necib of the California Institute of Technology.  What this paper tells us is something stunning; there is a streamer of stars in the Milky Way that started out somewhere else, and collided with our galaxy.  Rather fortunately, apparently the angle and velocity with which the streamer hit were more or less the same direction the original galaxy was turning, so these stars simply got sucked in, like some bits of debris going down a whirlpool.

The streamer has been named Nyx, after the Greek goddess of the night.  250 stars have been identified as being part of Nyx.  "The two possible explanations here are that they are the remnants of a [galactic] merger, or that they are disk stars that got shaken into their new orbits because of a collision with the disk of the Milky Way," said study lead author Lina Necib, in an interview with CNN.  The likelihood, though, is the former, something that is expected to be confirmed by chemical analysis of the constituent stars.  "Galaxies form by swallowing other galaxies," Necib said. "We've assumed that the Milky Way had a quiet merger history, and for a while it was concerning how quiet it was because our simulations show a lot of mergers.  Now, we understand it wasn't as quiet as it seemed.  We're at the beginning stages of being able to really understand the formation of the Milky Way."

I think it's stunning that we can figure out this sort of thing at all -- that 250 out of the estimated 250 billion stars in the Milky Way started out somewhere else in the universe.  I think that's pretty damn impressive.  "This particular structure is very interesting because it would have been very difficult to see without machine learning," Necib said.  "I think we reached a point in astronomy where we are not data limited anymore.  This project is an example of something that would have not been possible a few years ago, the culmination of developments in data with Gaia, high resolution simulations, and machine learning methods."

How pleased and amazed Carl Sagan would have been.  He went a long way toward bringing the wonders of the universe, from the largest scales to the smallest, to laypeople.  He certainly blew the minds of me and my friends, and that was back in 1980.  Necib's comment, that we're still at the beginning of being able to understand the formation of galaxies, tells us that we have a long way still to go -- and that many, many more eye-opening discoveries are sure to come our way in the next years.