I wonder what the early pioneers of genetics -- people like Gregor Mendel, Thomas Hunt Morgan, Reginald Punnett, and William Bateson -- would think if they could peruse a modern genetics textbook.

My hope is that they'd be delighted beyond words at where the science has gone since their time.  The simple foundation laid down by the first geneticists has been elaborated and modified into a complex, far-reaching science that has explanatory power from the molecular level to the characteristics of the organisms themselves (the phenotypes, or physical expressions, of the genes).  And now, just over 150 years after the publication of Mendel's book on statistical genetics that showed that inheritance of traits followed natural laws and generated predictable statistics, we're still adding to what we know.

Take the paper that came out in Nature this week, that describes a fascinating exception to Mendel's Law of Independent Assortment (one of his four laws of statistical genetics).  The Law of Independent Assortment says that every gene inherits by its own separate statistics.  Put another way, genes don't inherit in chunks; each one is its own flip of the coin.  Here's an example:

Well, we've known about some exceptions to that law for years; in fact, the aforementioned Bateson and Punnett were the ones who figured out what was going on with the discovery of linked genes, genes that lie near each other on the same chromosome.  In my earlier example, if the ABO blood type gene and the Rh+/- gene were close together on the same chromosome (they're not), then inheriting the A gene from her dad would make you more likely to also get the negative gene from her dad.  (You may be wondering why, if they're on the same chromosome, it doesn't make the likelihood of their inheriting together 100%; that's a whole 'nother topic, called crossing over, which I won't explain in this post because otherwise we'll never get to the recent research.)

The paper in Nature, called "Massive Haplotypes Underlie Ecotypic Differentiation in Sunflowers," by a huge team led by the trio of Marco Todesco, Gregory Owens, and Natalia Bercovich of the University of British Columbia, describes how the inheritance of huge chunks of DNA -- hundreds of millions of base pairs long, inherited as a single block -- has allowed related species of sunflowers to grab beneficial traits from each other and triggered differentiation and, ultimately, the formation of new species. 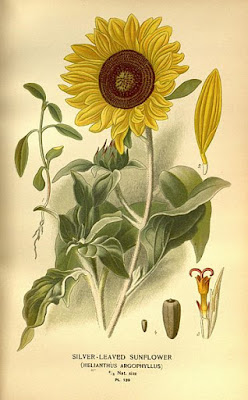 
Species often include multiple ecotypes that are adapted to different environments.  However, it is unclear how ecotypes arise and how their distinctive combinations of adaptive alleles are maintained despite hybridization with non-adapted populations.  Here, by resequencing 1,506 wild sunflowers from 3 species (Helianthus annuus, Helianthus petiolaris and Helianthus argophyllus), we identify 37 large (1–100 Mbp in size), non-recombining haplotype blocks that are associated with numerous ecologically relevant traits, as well as soil and climate characteristics.  Limited recombination in these haplotype blocks keeps adaptive alleles together, and these regions differentiate sunflower ecotypes.  For example, haplotype blocks control a 77-day difference in flowering between ecotypes of the silverleaf sunflower H. argophyllus (probably through deletion of a homologue of FLOWERING LOCUS T (FT)), and are associated with seed size, flowering time and soil fertility in dune-adapted sunflowers.  These haplotypes are highly divergent, frequently associated with structural variants and often appear to represent introgressions from other—possibly now-extinct—congeners. These results highlight a pervasive role of structural variation in ecotypic adaptation.

Catch that last bit?  Some of these "supergenes," as they're called, could have come from now-extinct species, whose DNA still exists and is still influencing the evolution of a different species.  How cool is that?

"What we think could have happened is that a species arrives in a new habitat, 'steals' adaptive supergenes from a local related species, and then replaces that species," said study co-lead author Marco Todesco, in an interview with Science Daily.  "We could call this a 'ghost supergene', the lingering contribution of a species that no longer exist."

How Gregor Mendel and the pioneers that followed would have been fascinated by all this!  We've come a tremendously long way from Mendel's mysterious "factors" (what we now call alleles) and the simplistic probabilities that generate the inheritance of flower color in pea plants.  Even the linked genes of Bateson and Punnett now seem like only the prologue to the story.

And what's more mindblowing still is that to geneticists in a hundred years hence, even what we know now will still probably only be chapter one.