I've been fascinated with evolutionary biology since I was a kid.  Along the way, I recall more than once learning some new piece of it and breaking out in a grin, thinking, "That is so cool!"  When I found out that all mammals have the same bone structure in their forelegs, regardless of function -- that a human arm, a dog's front paw, a whale's flipper, and a bat's wing are all made of the same set of bones, just with different relative sizes (and, of course, different soft tissue covering it).  When I found out that birds are dinosaurs, and that they retain non-functional copies of genes for making teeth.  When I found out that race is primarily a social and cultural construct, not a genetic one -- that two people living a mile apart in Botswana, one a San and the other a Shona, are about as genetically distinct from each other as a typical western European Caucasian is from a typical Japanese person, even though most of us call the first two the same race (black) and the second two different races (white and Asian).

Another one was when I found out that we not only have vestigial organs, we have vestigial behaviors.  You probably know a vestigial organ is sort of an evolutionary leftover, something our ancestral species had some use for -- but the usefulness went away, leaving behind a functionless structure (a familiar example is the human appendix, which apparently evolved in the context of breaking down cellulose in animals with a high-plant-material diet).  I'd known about this since Ms. Jane Miller's high school biology class.  But I didn't find out until college that we have some responses that are vestigial -- like goosebumps.

Goosebumps occur because of the little arrector pili muscles that surround each hair follicle, mostly in our arms, legs, and the back of the neck.  When these contract, it makes the hair stand on end, leading to the familiar experience of "goosebumps" or "gooseflesh."  (I'm not sure why geese have apparently cornered the market on this phenomenon.)  So the structure itself is vestigial, but it turns out, so is our response to what triggers it.  We typically get goosebumps when we're cold or when we're frightened, alarmed, or threatened.  But why?

The answer lies in observing cats.  If you're a cat owner, you've probably seen your pet with its hair standing on end, usually in one of two situations -- when it's cold (so that its raised hair traps heat better), or when it's angry (so that it looks bigger and more threatening).  Very few humans have enough body hair that they are significantly warmer or more threatening when they have goosebumps.  Fortunately.  But we still retain the response, even though it's not much use any more. 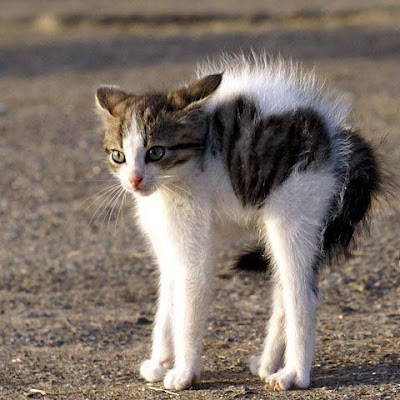 Well, as with most things, it turns out that it's not that simple, and is even cooler.  A paper this week in the journal Cell, written by a team led by Yulia Shwartz of the Department of Stem Cell and Regenerative Biology at Harvard University, describes research that shows that the underlying neurology of goosebumps might serve a purpose after all -- stimulating hair growth.  As the nerves fire that trigger goosebumps, neurotransmitters like norepinephrine are secreted into the tissue surrounding the hair follicles, and these act as a chemical signal that modulate gene activity in some pretty fundamental stretches of DNA, including the critical developmental gene Sonic Hedgehog.

The function of the system works by a feedback mechanism, Shwartz said.  "This particular reaction is helpful for coupling tissue regeneration with changes in the outside world, such as temperature.  It's a two-layer response: goosebumps are a quick way to provide some sort of relief in the short term.  But when the cold lasts, this becomes a nice mechanism for the stem cells to know it's maybe time to regenerate new hair coat."

And again, we retain this response even though most of us aren't that hairy any more.  The underlying neurological structure hasn't gone away.

Makes me wonder what other evolutionary leftovers we have still hanging around in our behaviors and responses.  We are constructs of our lineage, for better or worse, inheriting both its advantages and its constraints.  As advanced as we like to think we are, maybe a lot of what we do is because of some quirk of our ancestry -- which is both fascinating and humbling.