My wife and I live on a 3.5 acre bit of land in the hills of upstate New York.  We're lucky to have that kind of space, and the place itself is beautiful; it's crossed by a little stony-bedded creek, and has a swimmable pond and lots of big old trees for shade.

And lots of lawn.  At least it did when we moved in here eighteen years ago.  We've been gradually doing battle with the lawn for most of that eighteen years.  We replaced some with gardens -- which was a net loss of discretionary time, since weeding a garden takes a great deal more time than mowing an equal-sized piece of lawn.  My wife got the idea of replacing a lot of the grass in the back yard with clover, and she was helped out in that endeavor by our large galumphing dog Guinness, who essentially does a hockey stop whenever he's chasing his tennis ball, tearing up large strips of turf and thus earning himself the nickname "Skidmark."  But the clover's finally taken hold in a big way, and it not only looks great and needs way less mowing, it's a happy place for the honeybees.

That last bit was our incentive for turning a chunk of our front yard into a meadow.  A wonderful local nursery, The Plantsmen, specializes in native wildlife-friendly plants, so a couple of months ago we went down and came back with my Honda Element packed with such unusual finds as blue-stemmed goldenrod (Solidago caesia), nannyberry (Viburnum lentago), American scarlet elderberry (Sambucus racemosa), two different kinds of bergamot (Monarda spp.), fragrant sumac (Rhus aromatica), serviceberry (Amelanchier canadensis), and in a corner that has a permanent spring, the charming and water-loving buttonbush (Cephalanthus occidentalis). 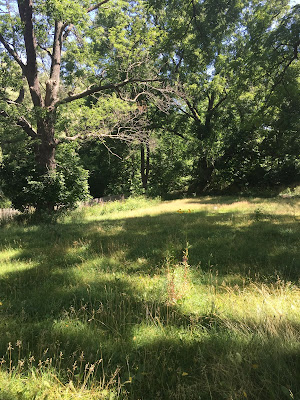 The Meadow thus far.  Okay, it doesn't look like much yet, but just you wait until our plants have a couple years' growth behind them.

The reason this topic comes up is because of a study that came out this week in the journal Biological Conservation about the role of verges in preserving valuable pollinators and beneficial insects.  Verges, they tell us, are hotspots for flowers and pollinators, often containing a dramatic diversity of different species (not all of which are native, of course; but then, neither is the white clover we seeded in our back yard, and I still consider it to be on balance a beneficial plant).

Of course, roads themselves are a necessary evil, replacing and fragmenting habitat, not to mention the never-ending problem of roadkill.  (Don't just think of mammals, here; think of the number of insects killed yearly by windshield collisions, and keep in mind that even the National Pesticide Information Center says that 97% of insect species are neutral with respect to humanity, or else actively beneficial).  So given that roads aren't going anywhere, the best thing to do is to figure out how to maximize whatever's positive about them, and minimize the negative ecological impact.

Verges seem to be the biggest positive feature, as long as they're managed properly.  The key, says the researchers (a group led by environmental scientist Benjamin Phillips of the University of Exeter), is to mow as infrequently as is practical for the spot.  Surprisingly, "don't mow at all" turns out to be a bad idea.  The authors write:

An observational study of 19 road verges in the UK found that mown verges (cut once between May and August, cuttings not removed) had on average 67% fewer flowers and 61% fewer pollinators across the summer than unmown verges, experimentally manipulated mowing frequency (cuts/year: 0, 1 (early autumn) or 2 (early summer and early autumn)) and removal of cuttings (left in the verge or removed) in a single road verge (with a species-rich plant community) in the Netherlands.  Increasing the number of cuts from 0 to 1 cut resulted in 3.5 times greater flower density and 2 times greater flower species richness, but no significant effect on pollinator density, though increasing from 1 to 2 cuts/year resulted in 3.5 times greater pollinator density.

This is good information for our own little meadow, because I wasn't sure if we should mow at all, but it sounds like it's a good idea; in our case, not only for the pollinators, but because in our area, completely stopping mowing is a good way to turn a meadow into a tangle of walnut saplings and nasty, fast-growing exotics like Tatarian honeysuckle and multiflora rose.

So it sounds like mowing once or twice -- maybe once in spring and once in fall -- might be the way to go.  That way the plants that die all the way back to the ground in the winter (like the goldenrod and bergamot) will get a fresh start each year, and we won't have competitors for the woody shrubs (such as the sumac, nannyberry, serviceberry, and elderberry).

I can't mow near where the buttonbush is, however, because the spring keeps that piece of the lawn soggy, and if I try to mow it our lawn mower sinks up to the axle and then I have to tow it out with my car.

Yes, that's the voice of experience, right there.

In any case, this paper was nicely timed from my perspective, as I was wondering what I'd do after the first frost when everything starts to die back.  Since we planted as we did to encourage the bees and butterflies, it's good to know that there's some solid scientific research to back up our choice of how to handle it.

With luck, in a couple of years we'll have something really beautiful to enjoy -- and a nice habitat for wildlife, as well.