A lot of times, it's the simple, easily-stated questions that are the hardest to answer.

Take, for example, the question of how the Moon formed.  Satellites around planets are common -- Jupiter has 79, for example -- but our own is a bit of an anomaly.  For example, if you make a list of moons in the Solar System in order of mass with respect to its host planet, the Earth's Moon is way out in front.  Its mass is 0.0123 of the Earth's.  Next in line would be Titan, which has a moon mass to planet mass ratio fifty times smaller (0.000237).

It's easy to picture a planet the size of Jupiter or Saturn gravitationally capturing blobs of the coalescing matter during the Solar System's formation, but it's harder to see a small planet like the Earth having the gravitational oomph to snag something the size of the Moon.  Another oddity is that of the sixteen most massive moons in the Solar System, the Moon's orbit around the Earth is by far the most eccentric.  Eccentricity is a number between zero and one that indicates how elliptical an orbit is, with 0.000 eccentricity being a perfect circle.  The Moon's deviation from a circular orbit is twice the next contender (which is once again Titan; whether that's a coincidence or not isn't known).  But the elliptical nature of the Moon's orbit is why its apparent size from Earth fluctuates, and explains why when there's a solar eclipse, sometimes it's total (complete coverage of the Sun's disk) and sometimes it's annular (occurs when the Moon is farther away and has a smaller apparent size, so at totality there's a ring of the Sun's disk still visible).

A third peculiarity of the Moon only became apparent when scientists got their first views of the far-Earth side around 1960, and they discovered that the far side had few maria -- the darker regions that were named for the Latin word for sea because it was thought early on that they might be water-filled oceans.  The largest two, the Oceanus Procellarum (Ocean of Storms) and the Mare Imbrium (Sea of Showers) together cover about 10% of the near-side disk of the Moon, and given that they're dotted with impact craters they seem to be very old structures.  (The first Apollo manned landing, in 1969 in the Mare Tranquillitatis (Sea of Tranquility), showed that the darkness of the maria is due to their being made largely of the dark volcanic rock basalt.) 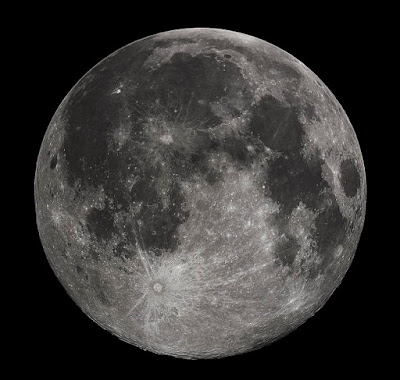 So something odd is going on here, but a research team headed by geophysicist Stephen Elardo of the University of Florida has come up with a compelling answer to at least one piece of it.  The best hypothesis for the formation of the Moon, the researchers say, is the head-on collision of two protoplanets, one about ten times larger than the other (the smaller is estimated to be about the size of Mars).

Wouldn't that have been something to see?  From a safe distance?

In any case, this colossal collision blew both planets to smithereens, creating a whirling cloud of white-hot rocks and dust.  When the debris cooled and re-coalesced, the heavier one (eventually the Earth) had a high enough gravity to sort out the mess and pull the denser elements, like nickel and iron, into the core.  The lighter one (eventually the Moon) didn't, so it was left asymmetrical, with one side enriched in uranium, thorium, and the elements collectively called KREEP (potassium [symbol K], the Rare Earth Elements [such as cerium, lanthanum, dysprosium, and yttrium], and phosphorus [symbol P]).  This combo is what created the maria.  Uranium and thorium are radioactive, and as they decay, they release heat.  One effect of rocks being enriched in KREEP elements is that it lowers their melting point.  This meant that the surface remained liquid much longer -- becoming the flat, dark basalt plains we now can see from Earth.  The other side, being much lower in uranium, thorium, and KREEP, froze solid very early, and the landscape largely lacks maria.

"Because of the relative lack of erosion processes, the Moon's surface records geological events from the Solar System's early history," said study co-author Matthieu Laneuville, geophysicist at the Tokyo Institute of Technology, in an interview with ScienceDaily.   "In particular, regions on the Moon's near side have concentrations of radioactive elements like uranium and thorium unlike anywhere else on the Moon.  Understanding the origin of these local uranium and thorium enrichments can help explain the early stages of the Moon's formation and, as a consequence, conditions on the early Earth."

So that's one piece of the puzzle.  It brings up other questions, though, such as whether the fact that all this happened on the near-Earth side is a coincidence or was driven by something about the collision that formed the Earth-Moon system.  But whatever the answer to that is, the whole topic is fascinating -- and the violence of our satellite's origin is something to remember the next time you're looking up on a clear, peaceful moonlit night.