This week's news from astronomy is pretty amazing; we now have the first-ever photograph of an exoplanet system around a star very much like our Sun.

The star is the euphoniously-named TYC 8998-760-1, in the southern hemisphere constellation Musca (the Fly).  It's about three hundred light years away, so not exactly in our back yard, but still fairly close on the astronomical scale.  It, and two of its planets, were featured in a paper by a team led by Alexander Bohn of Leiden University, in the following photograph: 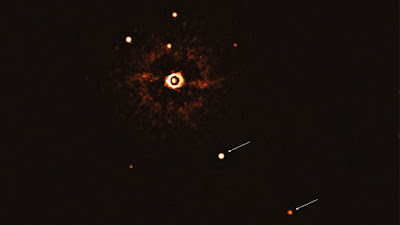 The two exoplanets are denoted with arrows; the other bright points of light near the star are distant stars lying behind the stellar system.

The photograph was taken by the Very Large Telescope array in Chile, which also has a fairly underwhelming name:


Astronomer 1: *takes swig of tequila* "So, what are we gonna name this thing, anyhow?"

Astronomer 2: *also takes swig of tequila* "Got me.  Maybe name it after Edwin Hubble, or something?"

Be that as it may, the photograph is stunning.  It bears keeping in mind, though, that the only reason it was possible is because the planets are so different than the ones in the Solar System, even if the star is similar to our Sun (although a lot younger; only an estimate seventeen million years old, so it was forming in the mid-Miocene Epoch, almost fifty million years after the extinction of the dinosaurs).  The two planets in the photograph are both enormous gas giants, the inner one fourteen times the mass of Jupiter, and the outer one six times; and they are very far away from their host star, with the inner one about 160 times further from its star than the Earth is from the Sun, and the outer one twice that far.  To put that in context -- the furthest human-made object, the Voyager 1 spacecraft, that flew out of the Sun's magnetic influence and into interstellar space in 2012, is still closer to the Sun than either of these planets are to its host star.

Nothing precludes this star having other planets, of course.  Multiple-planet systems seem to be the norm, the most famous of which is TRAPPIST-1, which has seven planets -- one of them of Earth-like size, and in the habitable zone, so a prime place to look for signs of life.  The likelihood is that TYC 8998-760-1 has other planets which were too small (or too close to the star) to show up in the photograph.  But as our ability to photograph astronomical objects continues to improve -- maybe with a Very Very Large Telescope -- we might well be able to see some of those, too.

In any case, the photograph released this week from Bohn et al. is breathtaking.  A portrait of two distant worlds in a planetary system very unlike our own in some respects, and startlingly similar in others.  It is a step toward beginning to comprehend the scale of what's out there, in a cosmos that seems to have planets everywhere we look, some of which almost certainly host life.  And maybe, on some planet around a distant star, there's an alien astronomer looking back at the Sun through their own Very Large Telescope, and thinking, "Look at that stellar system.  I wonder what it could be like?"