One of my favorite lectures in my AP Biology class was about how there's no such thing as a reptile.

If you took your last biology class before about 1995, you probably learned about Class Reptilia, containing turtles, lizards, snakes, crocodiles, alligators, and a few other assorted groups.  The class was defined by having dry, scaly skin, internal fertilization, "amniote" eggs with shells, and hearts that had incomplete septa (the wall down the center that separates the oxygenated left side from the deoxygenated right side).

Well, the last one wasn't 100% true, and that should have been a clue to what was going on.  Crocodiles and alligators have four-chambered hearts, and are also partial endotherms -- they show some capacity for internally regulating their own body temperatures, just as birds and mammals do.

It was genetic testing that finally settled who was related to whom, and that was when a lot of us got a shock (not so much the evolutionary biologists, who kind of expected this was how it was gonna work out).  The word "reptile" has no real taxonomic significance, because it lumps together groups that really aren't very closely related, and excludes others that are closer.  Here's how this branch of Kingdom Animalia evolved: 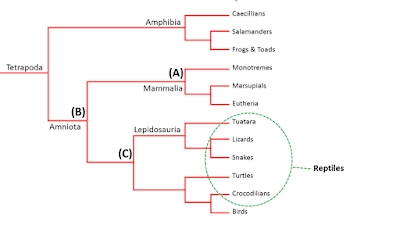 As you can see from the diagram, the problem was birds.  Crocodiles are more closely related to birds than they are to lizards (despite superficial appearance); and if you throw dinosaurs into the mix, it becomes even clearer, because birds are dinosaurs.

Think about that the next time you feed the chickadees.

So if you throw all the reptiles together, by the rules of cladistic taxonomy, you'd have to include birds, and nobody much wanted to call birds reptiles.  So the entire Class Reptilia was broken up, now as three different classes: Lepidosauria (lizards, snakes, and the oddball tuatara of New Zealand), Testudines (turtles), and Crocodilia (obviously crocodiles et al.).  Birds have their own class (Aves).

But what this brings up is how such different-looking animals as turtles and snakes evolved from a common ancestor.  The differences between the different groups of reptiles is pretty dramatic.  The explanation has usually been that it was adaptive radiation, a phenomenon that deserves some explanation.

Adaptive radiation is when a group undergoes rapid diversification to fill many available niches.  The classic example is Darwin's finches, a group of birds on the Galapagos Islands, which descend from a common ancestral group that split up to occupy different niches because of bill size and strength (which determines what they can eat).  That's a pretty drastic oversimplification, but it captures the essence: many available niches, and a population with sufficient genetic diversity to split up and specialize into those niches.

Because of the "many available niches" part, adaptive radiation is most common under two scenarios: a population colonizing a previously-uninhabited territory (as with Darwin's finches), and remnant populations left after a major extinction.  This was what was thought to have powered the split-up of the reptiles -- the "Great Dying," the Permian-Triassic extinction of 252 million years ago that by some estimates wiped out 95% of life on Earth.

Nota bene: there is fairly good evidence that the trigger for the Permian-Triassic extinction was hypercapnia -- a sudden increase in atmospheric carbon dioxide.  This led to drastic warming of the atmosphere and ocean acidification.  The cause -- according to a paper that just came out two weeks ago in the journal Geology -- was massive burning of coal.  Sound familiar?  In this case the cause was natural; it's thought to have been triggered by massive volcanism.  But the end result was the same as what we're doing now by runaway use of fossil fuels.  I'd like to think this would be a cautionary note, but the world's leaders seem to specialize in ignoring science unless it can directly make them money and/or keep them in power, so I'm not holding my breath.

But back to the reptiles.  The study that triggered this post, which came out this week in Nature Communications, points out the flaw in the argument that the adaptive radiation of reptiles was due to the Permian-Triassic extinction.  According to recent analysis, the split up was already well underway before the extinction started.  And the extinction itself was sudden, at least in geological terms; from start to catastrophic finish, the whole event took about a hundred thousand years.  In geological strata, this length of time is a very, very narrow band.

Plus, the different groups of reptiles individually show drastically different rates of specialization. "Our findings suggest that the origin of the major reptile groups, both living and extinct, was marked by very fast rates of anatomical change, but that high rates of evolution do not necessarily align with taxonomic diversification," said study lead author Tiago Simões of Harvard University, in an interview in Phys.Org.  "Our results also show that the origin of snakes is characterized by the fastest rates of anatomical change in the history of reptile evolution -- but that this does not coincide with increases in taxonomic diversity [as predicted by adaptive radiations] or high rates of molecular evolution."

The end result of the study is that the cause of the adaptive radiation is unknown.  It probably was pushed along by the mass extinction -- the species that survived the hypercapnia and the resulting environmental devastation were set up to have a whole empty world to colonize.  But what was driving the split-up of the group prior to the extinction itself?

Unknown, but the current study shows that clearly the adaptive radiation had already started.

I love puzzles like this.  In science, there are almost always more questions than answers, and every answer brings up new questions.  But another feature of science is the conviction that there is an answer even if we don't currently know what it is.  And chances are, further study will elucidate what exactly was going on -- and what led to the fragmentation of a group that now, over 250 million years later, comprises some of the best-known and most familiar critters who have ever walked (or flown across) the Earth.

Posted by Gordon Bonnet at 4:36 AM