Regular readers of Skeptophilia know that I've been a musician for a very long time.  I started on the flute when I was a teenager, more or less self-taught.  In my twenties, for several years while I lived in Seattle, I was fortunate enough to study the classical flute repertoire with a brilliant flutist and teacher named Margaret Vitus, who did wonders for my technique.  Shortly after that I became fascinated with Celtic music (due in no small measure to the wonderful radio program The Thistle & Shamrock, which thirty-some-odd years later is still going strong), and was for years part of a Celtic music quartet called Taradiddle that performed at the Seattle Folklife Festival four years running.

Along the way, though, I fell in love with Balkan music.  I'm not sure why it was such a draw for me -- I don't have a drop of eastern European blood and certainly hadn't heard it growing up.  But something about Bulgarian, Serbian, and Macedonian music was absolutely magnetic, and still is. 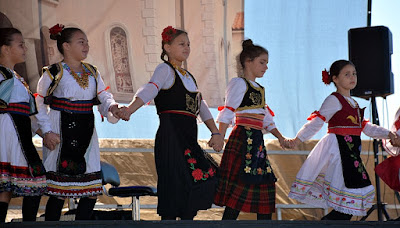 A lot of it was the asymmetrical rhythms.  People who are unfamiliar with this style of music often can't figure out how to count it or tap their feet to it, because it has rhythms you almost never hear in western music.  For example, what time signature would you say this tune is in?  (Listen to it before reading further, and see if you can figure it out.)


Ready for the answer?

It, like all kopanicas (pronounced ko-pa-neetsa; the kopanica is a Balkan dance, so they all have the same time signature) is in 11/16.  But you don't have to count up to 11 and then start over from 1; Balkan music is in combinations of 2s and 3s.  The 2s are the short, quick dance steps, and the 3s the longer steps; and a kopanica has the form of quick-quick-slow-quick-quick.  An easy way to count it out is to use a two-syllable word (I use apple) and a three-syllable word (I use cinnamon) to represent the 2s and 3s respectively.

So a kopanica is apple-apple-cinnamon-apple-apple.  Pretty tasty.  You might want to go back and listen again, and see if you can count it out.

Okay, it's not as hard as it sounds.  Really it isn't.

This weird rhythmic stuff comes up because of a study that came out last week in the journal Neuropsychologia that looked at fMRI studies of three groups of people -- musicians trained in the western European classical tradition, musicians trained in the Japanese classical tradition, and non-musicians.  In particular they were looking for responses in a part of the left hemisphere that is associated with processing auditory rhythm.

Unsurprisingly, both groups of trained musicians showed greater responsiveness in that part of the brain than non-musicians.  What was more interesting, though, was that the western and Japanese musicians didn't respond the same way, especially to asymmetrical beat patterns.  Most western classical music has until recently confined itself to symmetrical 2-, 3-, or 4-beat patterns; this is why the exceptions stand out, like the movement "Mars" from Gustav Holst's The Planets, which is in 5/4; and brilliant lunacy like Igor Stravinsky's The Rite of Spring.  (The joke amongst musicians is that when Stravinsky was asked what time signature The Rite of Spring was in, he responded, "Yes.")

Classical Japanese music, however, such as the music used in Noh and Kabuki, often use beat-lengthening, called ma (間), which sounds pretty peculiar to a lot of western ears, as if the stretched beats were random.  They're not, of course, any more than the 25/16 rhythm of "Dvajspetorka" is; it's just not rhythmically like what most of us are used to.  And the musicians trained in classical Japanese music responded to that as a natural, comprehensible rhythm, whereas the musicians trained in western classical music did not.

"We expected that musicians would exhibit strong statistical learning of unfamiliar rhythm sequences compared to non-musicians," said study lead author Tatsuya Daikoku, of the University of Tokyo, in a press release.  "This has been observed in previous studies which looked at responses to unfamiliar melodies. So this in itself was not such a surprise.  What is really interesting, however, is that we were able to pick out differences in the neural responses between those trained in Japanese or Western classical music."

So our brains really do respond differently to music that we grok.  I'd love to see if the same holds true for Balkan musicians as compared to musicians from other cultures; I know that there are talented musician friends of mine who listen to Balkan music with a puzzled frown, and never can quite catch hold of what the rhythm is doing, even once it's explained.  But it does show that learning can modulate what's happening all the way down to the neural level.

Because of course it is.