The rocks drawn down

The map of the world's continents is so familiar that for most of us, it seems permanent.  Even when you find out that the Earth's land masses have moved dramatically, that (geologically speaking) you don't have to go back very far to get to a time when the map would be unrecognizable, it's a little hard to fathom that the map is still changing now.  The tectonic plates are sliding as you read this, and every earthquake adjusts their positions a little bit.

Practically speaking -- and to any readers who are geologists, I will apologize for what will seem to you a drastic oversimplification -- there are three ways plates can move relative to one another:
The result is that the continents are being moved around, torn apart, and slammed back together all the time, just at a pace so slow we usually aren't aware of it.  But the reality is that the western bits of California are in the process of sliding northward along the North American coast and will eventually smash into Alaska; Australia will run into New Guinea, and north Africa into southern Europe; and Antarctica will slide northward, away from the South Pole and into what is now the southern Pacific. 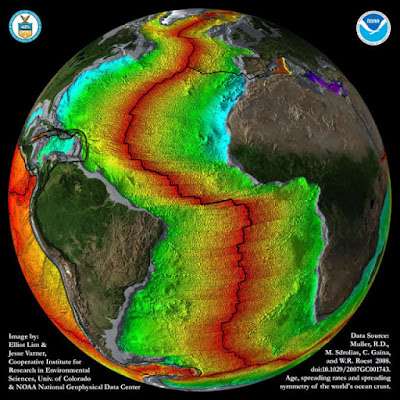 But new plate boundaries can form, as the subterranean forces in the mantle create new breaks or seams.  That's actually what brings this whole topic up; a friend and loyal reader of Skeptophilia sent me a link about research that's a few years old but that I'd somehow missed, that there's an "embryonic" subduction zone -- a convergent plate boundary -- forming off the coast of Portugal.  These things don't happen overnight, and the surmise is that this developing subduction zone is responsible for the devastating earthquake that hit Lisbon on November 1, 1755, and damn near flattened every building in the city.  It killed an estimated twenty thousand people, and geologists estimate that it had a magnitude of 8.4, more powerful than the more famous San Francisco Earthquake of 1906.

This complicates the picture in the Atlantic, however. The conventional wisdom is that the divergent boundary in the middle of the Atlantic -- shown in red in the above picture -- is moving North and South America away from Europe and Africa, but if there's a convergent boundary off the coast of Portugal, that'll eat up bits of the oceanic plate off the coast and pull Europe closer to North America.  (It also creates the possibility of Andes-type volcanoes in Portugal and Spain.)  Geologists are still investigating how, and how fast, this new convergent zone is moving, and what its capacity is for generating earthquakes and tsunamis -- we really only have the one significant data point, the 1755 earthquake, to make a stab at what the potential for seismic activity is.  And how this will affect the positions of the continents in the long term is at the moment anyone's guess.

It's endlessly fascinating to me how the face of the Earth can change -- for example, there have been at least three times that more or less all the land masses were fused together into one supercontinent (and the rest of the world was covered by one superocean).  Mountains and oceans have been a symbol of something eternal, unchanging, but in reality everything is in flux.  It recalls to mind the lines from Percy Shelley's evocative poem "Mont Blanc," which seems a fitting way to end:


Yet not a city, but a flood of ruin
Is there, that from the boundaries of the sky
Rolls its perpetual stream; vast pines are strewing
Its destin’d path, or in the mangled soil
Branchless and shatter’d stand; the rocks, drawn down
From yon remotest waste, have overthrown
The limits of the dead and living world,
Never to be reclaim’d.  The dwelling-place
Of insects, beasts, and birds, becomes its spoil;
Their food and their retreat for ever gone,
So much of life and joy is lost.  The race
Of man flies far in dread; his work and dwelling
Vanish, like smoke before the tempest’s stream,
And their place is not known.  Below, vast caves
Shine in the rushing torrents’ restless gleam,
Which from those secret chasms in tumult welling
Meet in the vale, and one majestic River,
The breath and blood of distant lands, for ever
Rolls its loud waters to the ocean-waves,
Breathes its swift vapours to the circling air.