Through the looking glass

Regular readers of Skeptophilia may remember that a couple of weeks ago, I attempted to write a post on the odd superstitions surrounding mirrors, but got sidetracked over and over.

In a curious almost-synchronicity, today I ran into an article about how artificial intelligence can learn how to detect mirror-reversed images, even when they don't have such obvious cues as text to go by.  So I figured I ought to give another shot at addressing the topic of mirrors, more seriously this time.

Mirror reversal is a peculiar phenomenon, and I recall when I was in introductory physics in college and we were studying the optics of mirrors and lenses, I spent an inordinate amount of time trying to figure out why a flat mirror reverses an image right-to-left but not top-to-bottom.

The answer, which many of you probably already know, is that mirrors don't reverse right-to-left, exactly; they reverse back-to-front.  This has the effect of a right/left reversal because it's like you're looking at the object from the other side (imagine the object in question was transparent, but you could still see its contours, and the reasoning becomes easier).

Look, I can prove it to you.  Stand in front of a mirror.  What it seems like is that there is another person who looks exactly like you standing behind a clear piece of glass, at the same distance from the glass as yourself and facing you.  Now, think about what it would be like if you were to join him/her -- go behind the mirror.  To get there, you would have to walk behind the glass and turn 180 degrees about the vertical axis to face you.  If you did that, your left hand would be opposite his/her right hand, and vice versa.  What actually happened is that your reflection didn't do a 180 degree turn.  It was reversed front to back with no rotation at all.  You're seeing yourself not so much reversed as turned inside-out.

Interestingly, there is a mirror that reverses objects top to bottom -- a concave mirror.  It also creates an image that appears to be in front of the mirror, not behind it, and in the right setup, the image seems to be floating in space (which is why the physicists call concave mirror images "real images," and ones that are behind the mirror -- as in flat and convex mirrors -- "virtual images"). 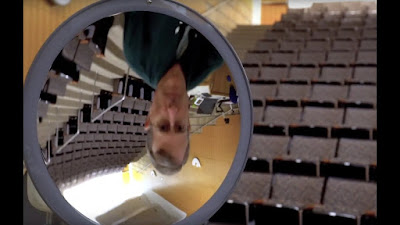 Whether concave mirrors reverse text is left as an exercise for the reader.

But what brought me to the subject of mirrors (again -- although my first attempt was pretty pathetic) is the paper "Visual Chirality," by Zhiqiu Lin, Jin Sun, Abe Davis, and Noah Snavely, of Cornell University, which was presented at the 2020 Conference on Computer Vision and Pattern Recognition.  What the researchers did was to use a trainable artificial intelligence program to analyze images, some of which were mirror-reversed and others which were not, to see if it was possible to determine reversal without using such giveaways as text, analog clocks, and so on.

And they got pretty good at it.  Some of the cues it picked up on were of the "oh, yeah, of course" type, such as looking at where the buttons were on a button-down shirt.  (Buttons tend to be on the right side -- although years ago women's shirts used to button from the other side, most shirts for either gender now usually have the buttons on the right.)  Wristwatches were also a giveaway, even when the faces weren't visible; most people wear them on the left wrist.  People carrying phones usually had them in their right hands, probably attributable to the fact that between seventy and eighty percent of us are right-handed.

But there were some curious ones.  Turns out the algorithm figured out that when people are in face-forward photographs but not looking directly at the camera, they usually gaze to the left.  Men with facial hair also were easy for the software to pick out when reversed -- the researchers suspect it has something to do with the way men trim their beards (perhaps also connected to using the right versus the left hand to do so), but what exactly the algorithm was picking up on, the researchers aren't certain.

"It’s a form of visual discovery," said study co-author Noah Snavely.  "If you can run machine learning at scale on millions and millions of images, maybe you can start to discover new facts about the world."

After training, the algorithm was getting the answer right eighty percent of the time even when all the obvious giveaways were removed -- not a bad score.  The study has applications in the analysis of images, and detection of when those images have been doctored or altered.

What it puts me in mind of is the facial asymmetry that most humans have, something well-known to portrait artists.  Take a sheet of paper, and stand in front of your bathroom mirror.  Relax your facial muscles -- try for a neutral expression -- and cover up first one, then the other, half of your face with the paper.  You'll be surprised at how different they look -- angle of the mouth, position of the eyebrows, and so on can vary greatly.  (There was an interesting study a while back that correlated facial symmetry with our perception of beauty -- and found that of the people tested, Denzel Washington had the most perfectly symmetrical face.  It may be that symmetry is an indication of freedom from some genetic flaws that influence skeletal development -- making symmetrical people good bets for producing healthy children -- but that, of course, is speculation.)

Anyhow, it's an interesting finding.  But I'm definitely going to pay more attention next time I trim my facial hair.