A long-standing unsolved puzzle in physics is the three-body problem, which despite its name is not about a ménage-à-trois.  It has to do with calculating the trajectory of orbits of three objects around a common center of mass, and despite many years of study, the equations it generates seem to have no general solution.

It's a problem that has application to our understanding of double and triple star systems, which seem to be quite common out there in the cosmos.  For people like me, who are fascinated with the possibility of extraterrestrial life, it's especially important -- because if the majority of planets in orbit around a double star (or worse, a triple star) follow unstable trajectories, that would represent a considerable impediment to the evolution of life.  Such planets would have wildly fluctuating climates, a possibility that resulted in a plot twist on the generally abysmal 1960s science fiction show Lost in Space, even though when it came up (1) the writers evidently didn't know the difference between a planet's rotation and its revolution, with the result that the blazing heat wave and freezing cold only lasted a few hours each, and (2) in subsequent episodes they conveniently forgot all about it, and it was never mentioned again. 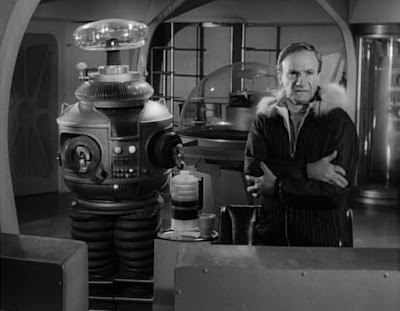 Be that as it may, now that we have a vastly-improved ability to detect extrasolar planets and determine their orbits around their host star(s), it's given us more information about what kinds of trajectories these complex systems can take.  For example, consider the system GW Orionis, which was the subject of a paper last week in Science.

GW Orionis is a trio of young stars, two of which are quite close together, and the third further away.  The two closer ones are whirling around pretty quickly, and the third making long swoopy dives in toward (and then away from) the others.

Complicated enough, but add to that a set of proto-planetary rings.  Three of them, in fact.  And unlike our own rather sedate star system, where all the planets except for Pluto are orbiting within under seven degrees' tilt with respect to a flat plane -- even Pluto's orbit is only tilted by fifteen degrees -- this system is kind of all over the place.

Here's an artist's conception of what GW Orionis looks like, based on the measurements and observations we have: 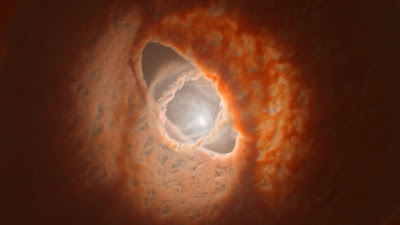 Pretty cool-looking.  Given our lack of knowledge of (in this case) six-body problems -- the three stars and the three planetary rings -- no one knows for sure if this is going to be a long-lasting, stable system, or if it will eventually collapse or fly apart.  It seems likely that the system would be a planetary Tilt-o-Whirl, and any orbits formed would be as chaotic as the animation I included above, but honestly, that's just a guess.

However, it's entertaining to think of what life would be like on a planet with three suns in the sky.  One more even than Tatooine: 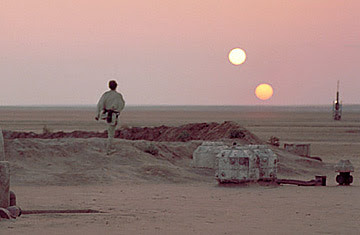 The more we scan the skies, the more awe-inspiring things we find.  I'm glad to live in a time when our ability to study the stars has improved to the point that we're able to consider not just systems like our own, but the vast array of possibilities that are out there.  One thing's for certain: if you are into astronomy, you'll never be bored.