When the topic of the paranormal comes up, I'm sometimes asked how I can be so sure that (fill in the blank: ghosts, cryptids, psychic abilities, the afterlife, extraterrestrial visitations/abductions) don't exist.

The answer is: I'm not sure.  Proving a negation is pretty close to impossible.  How, for example, could you prove that unicorns don't exist?  "I've never seen one" is pretty weak.

After all, I've never seen a wombat, and I'm pretty sure they exist.

To me, all that stuff boils down to probabilities based on rational evaluation of eyewitness testimony combined with what we know to be true from science.  What I mean by this is if you take all the sightings and personal accounts, and look at them with a coldly skeptical eye, you can come up with a good estimate of how likely the claim is to have at least a kernel of truth.  This is why I've always been more inclined to take cryptid sightings more seriously than UFO sightings, and UFO sightings more seriously than claims of psychic abilities.  None of them have any hard evidence in their favor.  However, there's nothing inherently impossible about the existence of Sasquatch and his buddies, while there's at least a good argument for the unlikeliness of alien intelligence making its way across the vastness of interstellar space; and even that is more likely than psychic abilities, which not only have no known mechanism by which they could occur, but have been tested to a fare-thee-well and thus far have not given a single positive result in any sort of controlled experiment.

So: it's not that I'm certain any of those don't exist.  All I'm arguing is that thus far, a skeptical analysis leans heavily toward the "no" side of things.

Sometimes, though, you can argue implausibility based on the number of claims made, and that works in an odd sort of fashion.  If there are a great many claims but still no hard evidence, that's a pretty strong indicator there's nothing there.  This is one of the strongest arguments against the existence of (for example) Bigfoot.  The claims of Bigfoot sightings easily number in the thousands; if the things are that common, surely by now there would have been at least one unequivocal bit of hard evidence in the form of bones, teeth, or hairs that don't match any known species.  So here, the more claims there are, the less likely they are to be about anything real, and the more likely they are to stem from suggestibility or outright fakery.

As an example of this, take the piece that appeared yesterday over at the site Mysterious Universe.  Brett Swancer wrote an interesting account of some claims being made on Reddit by a guy who goes by the handle @searchandrescuewoods.  The gist of his posts, which have gotten a good bit of buzz in the paranormal claims community, is that there's a faceless entity stalking the woods, freaking out hikers and (possibly) being responsible for several cases of abduction.  Swancer does a good job pulling together the stories, and I don't want to steal his thunder -- you really should read the article, although preferably not when you're alone at night -- but I will quote one of them, just so you get the flavor.  This one was told to @searchandrescuewoods by a friend who had been tasked with repainting an information sign on a woodland trail.  He was standing on a ladder working when a man came up asking for directions to a nearby campsite:


The second he came up and talked to me, the hairs on my neck stood up, but I wasn’t sure why.  I just had this really uneasy feeling about the whole thing, and I wanted to finish painting and get out of there.  I figured maybe part of it was that I couldn’t turn around to look at him, but something just felt off...  So I waited for the guy to walk away, but I didn’t hear him leave, which made me think he was just standing there and watching me, so I asked again if I could do anything for him, and he didn’t answer.

I knew he was there though, because I hadn’t heard him leave, so I did this awkward turn on the ladder to look down and see what he was doing.  Now I admit it could have just been my brain fucking up, but I swear to you, Russ, for a split second when I turned around, that fucker didn’t have a face.  Like he had no face.  It was almost concave, and totally smooth, and I just about had a fucking heart attack because I couldn’t even wrap my brain around what I was seeing.  I think I started to say something but there was this kind of ‘pop’ inside my head and suddenly he was just a normal looking guy.  I must have looked weird because he asked me if I was okay, and I was just like ‘yeah, I’m fine.’  He asks about the campsite again and I point to where he has to go, and he’s like ‘I’m not from around here, can you help me get there?’  Now this is when I know something is really up because there’s no way this guy got out here and didn’t know where he was.  And for that matter, there’s no car around, so how’d he get here in the first place?  I said I was sorry but that I couldn’t take him anywhere in a company vehicle, and he’s like ‘please?  I really don’t know where I am, can you come with me and help me get there?’

So now I’m seriously weirded out, and I start wondering if this is some kind of ambush or whatever.  I told him I could call him a taxi to come out and take him where he wants to go, and I pull out my phone and he just goes ‘no’ and walks away really quickly.  But he doesn’t walk out of the park, he walks back into the fucking trees and I got right in my fucking truck and start to get out of there, fuck the paint or whatever.  I looked in my mirror to see where he was as I was leaving and he was standing right at the tree line again,  I don’t know how he got there so fast, but this time I know that fucker didn’t have a face.  He was just watching me leave, and right before I turned the corner he took a big step back into the trees and kind of dissolved, I guess.  Maybe it was just dark so he blended in, but it felt more like he just melted away.

Creepy, atmospheric stuff.  Shades of "Slender Man" (remember him?), the gaunt, faceless man who started from a story over at Creepypasta and made his way into the urban legend universe.  (In fact, Slender Man makes an appearance in my novel Signal to Noise, but -- I hasten to add -- that's a work of fiction.) 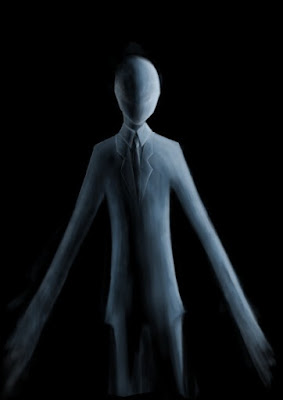 Okay, what strikes me here is that if this thing is haunting our National Parks so much that @searchandrescuewoods and his friends have seen it multiple times, why hasn't anyone else?  When I was in my twenties and thirties I pretty much spent all summer back-country camping in the Cascades and Olympics, and -- suggestible as I am -- I never saw a single thing out of the ordinary.  Think about it; if this creature, whatever it supposedly is, is this common, surely a whole bunch of the other thousands of campers hiking around the wilderness would have reported seeing it.

The fact that no one is reporting sightings other than @searchandrescuewoods is a strong argument that there's nothing there to investigate.

To return to my starting point, however; all this doesn't mean that I know the stories are untrue.  I just need more than some more-or-less anonymous posts on Reddit to convince me that they're anything but engagingly scary fiction.

On the other hand, if the next time I'm on a trail run in the nearby National Forest, I am accosted by a guy with no face, I suppose it'll serve me right.