I've always been a bit in awe at people who are true math-adepts.

Now, I'm hardly a math-phobe myself; having majored in physics, I took a great many math courses as an undergraduate.  And up to a point, I was pretty good at it.  I loved calculus -- partly because my teacher, Dr. Harvey Pousson, was a true inspiration, making complex ideas clear and infusing everything he did with curiosity, energy, and an impish sense of humor.  Likewise, I thoroughly enjoyed my class in differential equations, a topic that is often a serious stumbling block for aspiring math students.  Again, this was largely because of the teacher, a five-foot-one, eccentric, hypercharged dynamo named Dr. LaSalle, who was affectionately nicknamed "Roadrunner" because she was frequently seen zooming around the halls, dodging and weaving around slow-moving students as if she were late for boarding a plane.

But at some point, I simply ran into an intellectual wall.  My sense is that it happened when I stopped being able to picture what I was studying.  Calculating areas and slopes and whatnot was fine; so were the classic differential equations problems involving things like ladders slipping down walls and water leaking out of tanks.  But when we got to fields and matrices and tensors, I was no longer able to visualize what I was trying to do, and it became frustrating to the extent that now -- forty years later -- I still have nightmares about being in a math class, taking an exam, and having no idea what I'm doing.

Even so, I have a fascination for math.  There is something grand and cosmic about it, and it underpins pretty much everything.  (As Galileo put it, "Mathematics is the language with which God wrote the universe.")  It's no wonder that Pythagoras thought there was something holy about numbers; there are strange and abstruse patterns and correspondences you start to uncover when you study math that seem very nearly mystical.

The topic comes up because of a recent paper in Experimental Mathematics that solved a long-standing question about something that also came out of the ancient Greek fascination with numbers -- the five "Platonic solids", geometrical figures whose sides are composed of identical regular polygons and which all have identical vertices.  The five are the tetrahedron (four triangular faces), the cube (six square faces), the octahedron (eight triangular faces), the dodecahedron (twelve pentagonal faces), and the icosahedron (twenty triangular faces).  And that's it.  There aren't any other possibilities given those parameters. 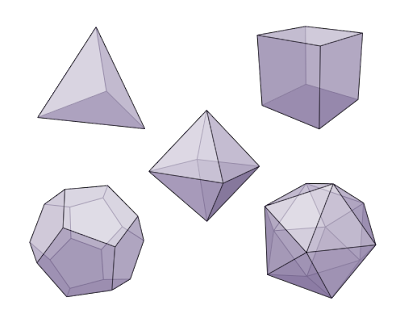 The research had to do with a question that I had never considered, and I bet you hadn't, either.  Suppose you were standing on one corner of one of these shapes, and you started walking.  Is there any straight path you could take that would return you to your starting point without passing through another corner?  (Nota bene: by "straight," of course we don't mean "linear;" your path is still constrained to the surface, just as if you were walking on a sphere.  A "straight path" in this context means that when you cross an edge, if you were to unfold the two faces -- the one you just left and the one you just entered -- to make a flat surface, your path would be linear.)

Well, apparently it was proven a while back that for four of the Platonic solids -- the tetrahedron, cube, octahedron, and icosahedron -- the answer is "no."  If you launched off on your travels with the rules outlined above, you would either cross another corner or you'd wander around forever without ever returning to your starting point.  Put a different way: to return to your starting point you'd have to cross at least one other corner.

The recent research looks at the odd one out, the dodecahedron.  In the paper "Platonic Solids and High Genus Covers of Lattice Surfaces," mathematicians Jayadev Athreya (of the University of Washington), David Aulicino (of Brooklyn College), and W. Patrick Hooper (of the City University of New York) showed the astonishing result that alone of the Platonic solids, the answer for the dodecahedron is yes -- and in fact, there are 31 different classes of pathways that return you to your starting point without crossing another corner.

The way they did this started out by imagining taking the dodecahedron and opening it up and flattening it out.  You then have a flat surface made of twelve different pentagons, connected along their edges in some way (how depends on exactly how you did the cutting and unfolding).  You start at the vertex of one of the pentagons, and strike off in a random direction.  When you reach the edge of the flattened shape, you glue a second, identical flattened dodecahedron to that edge so you can continue to walk.  This new grid will always be a rotation of the original grid by some multiple of 36 degrees.  Reach another edge, repeat the process.  Athreya et al. showed that after ten iterations, the next flattened dodecahedron you glue on will have rotated 360 degrees -- in other words, it will be oriented exactly the same way the first one was.

Okay, that's kind of when my brain pooped out.  From there, they took the ten linked, flattened dodecahedrons and folded that back up to make a shape that is like a polygonal donut with eighty-one holes.  And that surface is related mathematically to a well-studied figure called a double pentagon, which allowed the researchers to prove that not only was a straight line returning to your origin without crossing another corner possible, there were 31 ways to do it.

"This was one of the most fun projects I've worked on in my entire career," lead author Jayadev Athreya said, in an interview with Quora.  "It's important to keep playing with things."

But it's also pretty critical to have a brain powerful enough to conceptualize the problem, and I'm afraid I'm not even within hailing distance.  I'm impressed, intrigued, and also convinced that I'd never survive in such rarified air.

So on the whole, it's good that I ended my pursuit of mathematics when I did.  Biology was probably the better choice.  I think I'm more suited to pursuits like ear-tagging fruit bats than calculating straight paths on Platonic solids, but I'm really glad there are people out there who are able to do that stuff, because it really is awfully cool.