I'm not absolutely certain about this, but I strongly suspect that every time I taught my biology students about the physiology of color vision, someone asked, "Is it possible that we see colors differently?  Like, what you call red is the color I see as green, but we've both learned to call it red?"

My usual response was, "It's possible, given that I can't see the world through your eyes and interpreted by your brain.  I only have access to my own perceptive apparatus.  However, it's pretty unlikely, given that your eyes and brain are structured pretty much identically to mine, so there's no reason to surmise they see the world in a radically different way.  The most parsimonious explanation is that we all perceive colors alike."

That parsimonious explanation got a boost this week by a paper in Psychological Science called, "Universal Patterns in Color-Emotion Associations Are Further Shaped by Linguistic and Geographic Proximity," by a huge team led by Domicele Jonauskaite of the University of Lausanne.  The researchers asked 4,598 volunteers from different cultures to answer questions about the connections they saw between colors and emotions.  In English, for example, we talk about seeing red, being green with envy, or feeling blue.  Presumably other cultures also associate colors with emotions -- but are the correspondences the same across cultures? 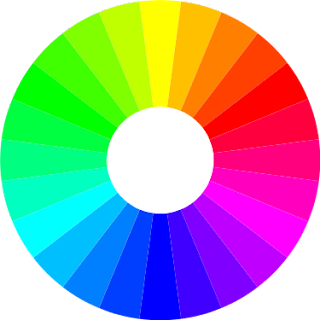 Interestingly, the answer appears to be yes.  There were a few unusual ones that popped out, such as the association in China of the color white with sadness.  White is traditionally worn at Chinese funerals, thus the link.  The same was found with the color purple in Greece; in Greek Orthodox culture, purple is considered the color of mourning.

But there were far more similarities than differences, including some that when you think about it, are rather odd.  Red is one of the only colors that has connection to two essentially opposite emotions; it is the color both of love and of anger.  This same link turns out to be relatively uniform across cultures.  (The anger part might be because of the association with violence and blood; the connection to love is the stranger one.)  Likewise, brown is the color that has the least emotional impact, regardless what culture you are from.

Unsurprisingly, the closer two cultures were geographically and linguistically, the more similar the correspondences were.  That much you'd expect, because of an overlapping or shared heritage.  But even accounting for that, there were more similarities than differences even between very distantly-related cultures.  "There is a range of possible influencing factors: language, culture, religion, climate, the history of human development, the human perceptual system," said study co-author Daniel Oberfeld of Johannes Gutenberg-Universität Mainz.  "Many fundamental questions about the mechanisms of color-emotion associations have yet to be clarified."

It does, though, settle one thing; we are very likely to all see colors the same way.  Your blue and my blue, for example, are perceived alike, and if we were somehow to switch bodies, we wouldn't suddenly see the world painted in a completely different palette.  If that weren't true, why would yellow be the color of cowardice in both the United States and west Africa?

This doesn't, of course, answer the question of why yellow is for cowards in the first place.  Other than the obvious ones like red=blood, the color-to-emotion correspondences are pretty weird.  But it does seem to support the conjecture that regardless of why we link emotions to colors, my color perception works the same as yours does.

Just as well.  Trying to picture a world where the grass is orange and the sky is yellow is making my head hurt.