A couple of nights ago I woke up in the middle of the night (not an unusual occurrence for me) in time to hear our local pack of coyotes whooping it up.

I love coyotes.  Their wild screaming and yapping in the distance on an otherwise still night is an eerie, evocative, primal sound that reminds me that nature is out there, all around me, surrounding my comfortable and civilized life -- and it's far, far bigger than I am.

From another angle, my background in linguistics always makes me wonder what they're saying.  The formal definition of language is "arbitrary symbolic communication;" symbolic in the sense that the word stands as a symbol for the object, action, or concept, and arbitrary in that except for a few onomatopoeic words like "bang" and "splat," the connection between the word and what it symbolizes is more or less accidental and will vary from language to language.  (For example, étoile, stjerne, hoshi, and zvezda mean "star" in French, Norwegian, Japanese, and Russian, respectively, but the sounds of the words have nothing especially stellar about them.)

So by the definition, what the coyotes are doing probably isn't language.  It's communication, yes; it undoubtedly facilitates pack cohesion and performs functions like letting the others know if there's a danger or a potential prey nearby.  But any symbolism there (e.g. a high-pitched yelp means "I see a rabbit") is almost certainly extremely rudimentary and shallow at best.

I'm not running down the dogs, though.  Fortunately, neither of my dogs is an incessant barker, but we can tell the difference between the barks from our elderly hound, Lena, depending on whether she wants to be let inside, she sees a chipmunk, she saw my wife drive up, she's playing with our other dog, or she's standing on the end of the dock barking at the goldfish in the pond.  (Yes, she does that.  Nowhere above did I imply that she's smart.) 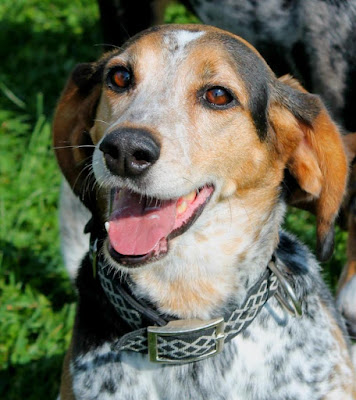 She's extremely happy, though.  Which is almost certainly better than being smart.

What brings this up is a fascinating study in Proceedings of the National Academy of Sciences last week showing that an elusive canine long thought to be extinct in the wild -- the New Guinea Singing Dog -- is still out there.


An audio recording of six Singing Dogs in chorus

The Singing Dog -- as you heard if you listened to the audio in the link -- has a mournful, but oddly musical, howl that isn't quite like a wolf's, and certainly nowhere near the wild cacophony of coyotes.  There are Singing Dogs in captivity in zoos, but the small gene pool has meant that they've begun to show signs of degradation from inbreeding, so the discovery that the elusive Highland Wild Dog of New Guinea is almost identical to the Singing Dog provides hope that the subspecies may be a good target for conservation.

Also, a study of the genome of the Singing Dog might give us some clues about where their fantastic repertoire of vocalizations comes from.  It's been known for some time that our own ability to speak is related in some way to the FOX-P2 gene, because mutations in it cause developmental dyspraxia.  But a great many mammals have a similar FOX-P2 gene to that of humans, and even birds do.  Further, mutations in birds' FOX-P2 gene causes problems in songs and calls, indicative that it has an important role in vocal communication throughout the animal world -- and is evolutionarily very old, given that the last common ancestor between birds and mammals was on the order of three hundred million years ago.

So the new discovery about the New Guinea Singing Dog is fascinating from a number of angles.  Not only do we have a chance to save a truly unique population, but the information we've gleaned might shed some light on how vocal communication evolved.

But now I need to go see what Lena's barking at.  Last time she made sounds like this, it turned out she was barking at a stick.  To be fair, it was a very threatening-looking stick.  Just protecting our home from danger, like a good dog should.