Forecasting on a fault line

Living in an earthquake zone is risky business.
I lived for ten years in Seattle, which is immediately adjacent to the Cascadia Subduction Zone, widely considered to be one of the most potentially dangerous faults in the world.  The little Juan de Fuca plate -- all that's left of a much larger piece of oceanic crust that once lay underneath Panthalassa, the ocean that surrounded the supercontinent Pangaea back around the time of the Permian-Triassic Extinction of 251 million years ago -- is slowly disappearing as it gets pulled underneath the North American Plate by convection currents in the mantle.  Subduction zone earthquakes occur along trenches that form the boundaries between plates that are moving toward each other, generating a "thrust fault" as one plate dives beneath the other.  Not only do these produce some of the most massive earthquakes known, they also generate volcanoes like Mount Saint Helens and Mount Rainier.
So lovely as the Seattle area is, it's kind of a disaster waiting to happen.  If you have a high tolerance for being freaked out by the power of the natural world, or you don't live in the Pacific Northwest (or both), you should read journalist Kathryn Schulz's wonderful analysis "The Really Big One" that appeared in The New Yorker in 2015.  Her predictions for what will happen to the area when Cascadia ruptures are truly terrifying -- and would be enough to keep me from ever moving back there, much as I loved western Washington for its culture, climate, and natural beauty. 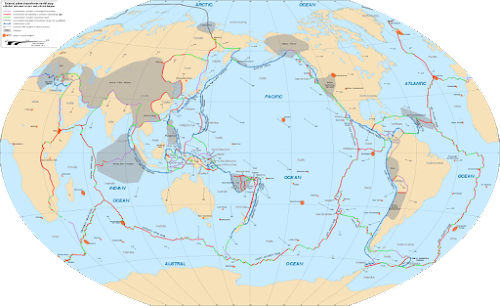 [Image is in the Public Domain]
If you read the article hoping that Schulz (or the geologists she interviewed) can tell you when the "Really Big One" is going to occur, you're not going to find what you're looking for.  We have a pretty good idea of where earthquakes occur and the types of faults that cause them, but predicting when they'll happen is far more problematic.  And sometimes, even the "where" isn't predictable.  In November of 2019 a 5.0 magnitude quake hit the Rhône Valley in France, along the La Rouvière Fault -- a fault zone that we thought was last active twenty million years ago.
Just last week, though, three papers came out looking at the warning signs that a fault is about to rupture, and methods we may be able to use to predict when they'll happen and how big they'll be.  Getting better at this is imperative for the millions of people who live in quake-prone areas, and could potentially save countless lives.
The first, in the journal Nature, was by a team led by Jonathan Bedford of Helmholtz Centre Potsdam.  In "Months-Long Thousand-Kilometre-Scale Wobbling Before Great Subduction Earthquakes," we learn that there are warning signs -- a slow backward drag on the plate margin that ends with a massive slip in the opposite direction, a little like pulling backward on a bowstring and then letting go suddenly.  The authors write:

[We used] a recently developed trajectory modelling approach that is designed to isolate secular tectonic motions from the daily GNSS time series to show that the 2010 Maule, Chile (moment magnitude 8.8) and 2011 Tohoku-oki, Japan (moment magnitude 9.0) earthquakes were preceded by reversals of 4–8 millimetres in surface displacement that lasted several months and spanned thousands of kilometres.  Modelling of the surface displacement reversal that occurred before the Tohoku-oki earthquake suggests an initial slow slip followed by a sudden pulldown of the Philippine Sea slab so rapid that it caused a viscoelastic rebound across the whole of Japan.

The second paper, in Science, looked at what's happening deep underground beneath one of the most famous fault zones, the strike-slip San Andreas Fault.  In "Excitation of San Andreas Tremors by Thermal Instabilities Below the Seismogenic Zone," geologists Lifeng Wang of the China Earthquake Administration and Sylvain Barbot of the University of Southern California found that temperature patterns can predict the likelihood of a fault suddenly giving way.  For a while, the pieces of the plate margin can slowly, steadily grind past each other, but that motion generates frictional heating.  This can lead to rapid fault failure as the warming rock becomes more plastic.  "Just like rubbing our hands together in cold weather to heat them up, faults heat up when they slide. The fault movements can be caused by large changes in temperature," said study co-author Sylvain Barbot, in an interview with Science Daily.  "This can create a positive feedback that makes them slide even faster, eventually generating an earthquake."

Last, in Nature Communications, geologists Claudia Hulbert and Romain Jolivet (of the École Normale Superieure) and Bertrand Rouet-LeDuc and Paul Johnson (of the Geophysics Group at Los Alamos National Laboratory) turned the power of machine learning on past patterns of seismic instability, and found that large "megathrust" earthquakes were preceded by as much as a year-long slow slip.  Where this slip is occurring, and how fast, might give us advance warning of a major fault rupture:

Slow slip events result from the spontaneous weakening of the subduction megathrust and bear strong resemblance to earthquakes, only slower.  This resemblance allows us to study fundamental aspects of nucleation that remain elusive for classic, fast earthquakes.  We rely on machine learning algorithms to infer slow slip timing from statistics of seismic waveforms.  We find that patterns in seismic power follow the 14-month slow slip cycle in Cascadia, arguing in favor of the predictability of slow slip rupture.  Here, we show that seismic power exponentially increases as the slowly slipping portion of the subduction zone approaches failure, a behavior that shares a striking similarity with the increase in acoustic power observed prior to laboratory slow slip events.  Our results suggest that the nucleation phase of Cascadia slow slip events may last from several weeks up to several months.

Even though such a pattern of slow slips might tell us that a major earthquake is imminent, it's unlikely we'll ever be able to say "... and it's going to happen next Friday at ten A.M."  And given our penchant for ignoring science unless it can give us pinpoint accuracy, we're probably not going to see much change in our behavior.  After all, that tendency is at the heart of the United States's failure to address the COVID-19 pandemic -- the scientists were saying back in December and January, "this has the capacity to be deadly and fast-spreading," and government officials said, "How fast and how deadly?"  The scientists had to say, "We're not sure yet," and that was insufficient for leaders to take swift and decisive action.  (And that's not even taking into consideration that Donald Trump knew about the danger, admitted up front the potential devastation COVID-19 could cause, and deliberately decided to lie about it because he was afraid it would hurt his chances of being re-elected.)

So we're not so good at reacting to clear and present dangers if the remedy is inconvenient or costly.  As James Burke said, in his frighteningly prescient 1991 documentary After the Warming, "The scientists said that devastating climate change was going to happen at some point, but for most people that wasn't good enough.  We wouldn't pay for what amounts to climate insurance, even though we happily insure our lives and our property against far less likely occurrences."

Be that as it may, I'm glad we're seeing this progress being made.  Earthquakes are notorious amongst natural disasters at giving no warning whatsoever, so anything we could do to figure out how to predict them more accurately could potentially save lives.

But even so, I don't think I'd want to live in the Pacific Northwest again.