King of the who?

Given yesterday's post on odd coincidences, I thought it was kind of amusing that I stumbled upon the topic for today's post -- more or less by random chance -- immediately after reading two books that touched on the subject.

Both of them are about the Arthurian Legends, which has been an interest for years, so my reading them isn't itself odd.  It's odder, perhaps, that I didn't like either one of them at all.  The first was the novelization of the story from the point of view of Morgaine (Morgan le Fay), Marion Zimmer Bradley's The Mists of Avalon.  I found just about every character in the story somewhere between obnoxious and downright repulsive, and it's hard to stay invested in a novel when I honestly don't give a damn if the characters live or die.  (My distaste was only deepened when I found out about the disturbing allegations against Bradley and her husband made by their children -- allegations which were proven in the husband's case, leading to his being sent to prison for pedophilia and dying there in 1993.)

The second was intended as historical scholarship, and although I'm hardly a qualified expert on the subject, this one seemed to me to face-plant rather badly as well.  Norma Lorre Goodrich's book King Arthur looks at the literary sources of Arthuriana, focusing especially on Geoffrey of Monmouth, Chrétien de Troyes, and Thomas Malory.  Glossing over the fact that the earliest of the three -- Geoffrey of Monmouth -- was still writing a good five centuries after Arthur's time, she goes through intellectual backflips to support her contention that Arthur and his pals weren't from Cornwall and Wales as usually depicted, but from Scotland, more specifically the area around Stirling and Edinburgh.  Like I said, I can't give a knowledgeable opinion about her use of the source material, but I am qualified to say that her attempts at historical linguistics are nothing short of silly.  (They amount to, "if you change this letter to this one, and reverse the syllables, and add a prefix, you can clearly see these two words are the same!")

Oh, and when she mentioned "fifth century Vikings" I wasn't sure whether to laugh or to hurl the book across the room. 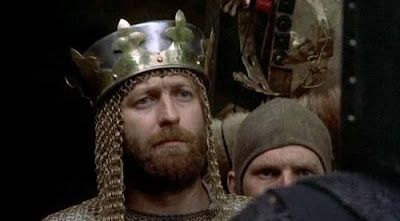 Anyhow, I just stopped reading Goodrich's book last night (didn't finish it and don't intend to), so I was a little startled when, in the course of looking for a topic for today's post, I stumbled quite by accident on an article in Edinburgh Live from only last week about some new archaeological discoveries on "Arthur's Seat," the remains of an extinct volcano overlooking the Firth of Forth.  Researchers have found the site of a village occupied by the Votadini, a rather mysterious Iron Age Celtic tribe who spoke a Brythonic language (i.e. more closely related to Welsh, Breton, and Cornish than to Scots Gaelic), centered around Traprain Law, a hill fort seventeen kilometers east of Edinburgh. 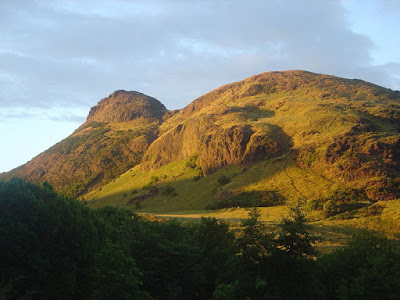 Which, of course, is exactly the area Goodrich claims was Arthur's bailiwick.  That she's not the only one who thinks there's a connection to King Arthur is evident from the name of the site, although it seems likely that the place was named a long while after Arthur's time by people who thought the Arthurian connection gave the place more gravitas.

Anyhow, the new research on the topic is more grounded in history, and more interesting.  The remains of the village on Arthur's Seat showed some significant fortification, including buildings surrounded by a hundred-meter-long, five-meter-thick rampart blocking the easiest path up to the top of the hill.  Fifth-century Roman silver coins were found at the site, suggesting the Votadini traded with the Romans living in the northern parts of England, although the evidence is their territory was only under actual occupation during a fairly short time in the middle of the second century C. E.

The archaeologists, however, found zero evidence of King Arthur having anything to do with the site.  If, in fact, there ever was a historical Arthur, something the jury is still out on.  The problem is, you can't really base history on a bunch of (way) after-the-fact, quasi-mythological accounts.  One of the best and most exhaustive analyses of the topic -- Francis Pryor's Britain A.D.: A Quest for Arthur, England, and the Anglo-Saxons -- found that the earliest source known that explicitly mentions Arthur, Nennius's Historia Brittonum, was written in the early ninth century, still a good three hundred years after Arthur's (alleged) reign.

Still, absence of evidence is not evidence of absence, as cosmologist Martin Rees was wont to say.  There could have been an Arthur messing about in Britain back then.  And there's no doubt that it's at the very least a fascinating legend.

I do still find it funny that I ran across this research literally the day after reaching the limits of my tolerance for Norma Lorre Goodrich's wild speculations on the same place and the same topic.  Not only that, a day after writing here at Skeptophilia on the subject of odd coincidences.  Which you have to admit is kind of meta.  Either it's the universe having a good laugh at my expense, or else I need to re-read my own post about how strange coincidences don't actually mean anything.