One of the most amazing and inspirational figures in the history of modern science is the geneticist Barbara McClintock.

McClintock got her Ph.D. in botany back in 1927, in a time when women simply didn't go into science.  There was a huge cultural bias against female scientists -- not only a sense of "that's not something a woman should be interested in," but the presence of a huge, white-male-dominated edifice already in place that was damn near impenetrable for women and minorities.

This wasn't a glass ceiling, it was a solid marble monolith.

But if there was one phrase that describes McClintock's career, it's "dogged determination."  She focused on the genetics of maize during a time when just about everyone was studying fruit flies.  She racked up success after success, doing the first-ever preliminary analysis of the maize genome way back in 1929, and afterward demonstrating how crossing over contributed to variation in offspring. 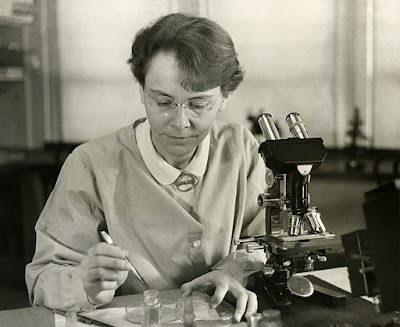 The story becomes even more interesting with her discovery in the 1950s of transposable elements -- gene segments that can move within an organism's genome.  She showed -- beyond any reasonable doubt -- that these transpositions were responsible for features of seed color inheritance in Indian corn, and very likely for a host of genetic inheritance patterns in not only maize, but other species as well.

Well, "beyond any reasonable doubt" is said with 20/20 hindsight.  The members of the aforementioned marble monolith were grudgingly okay with a woman making docile and innocuous additions to the body of scientific knowledge, but not with her overturning a major tenet of genetic dogma.  They derided her discovery as "jumping genes" and, basically, refused to participate in or fund research to elucidate further what McClintock had discovered.

This is where the "dogged determination" part comes in.  Undeniably discouraged but not defeated, McClintock continued to amass more and more information, both supporting her original claim and also showing how it happened and what the effects of genetic transposition were.  It took almost thirty years, but eventually she had enough data to convince even the most negative of the naysayers -- and for her discovery, she won the Nobel Prize in Medicine in 1983.

The topic of McClintock's discovery comes up because of a paper that appears this week in Science Advances.  In the rather intimidatingly-titled "Primate-Restricted KRAB Zinc Finger Proteins and Target Retrotransposons Control Gene Expression in Human Neurons," we find out something extraordinary; McClintock's transposable elements are responsible for the differentiation of neurons in our own brains.

The study, led by Priscilla Turelli of the École Polytechnique Fédérale de Lausanne, looked at a group of proteins called Krüppel-associated box-containing zinc finger proteins, which seemed to regulate the activity of transposable elements very early in fetal development.  What they found was that these "KZFP" genes were active only in certain cells in the developing brain -- and seemed to be guiding differentiation of brain cells.

More amazing still, the researchers found two KZFP genes that appear to be unique to primates, a tantalizing clue about the evolution of our own large and complex brains.

"These results reveal how two proteins that appeared only recently in evolution have contributed to shape the human brain by facilitating the co-option of transposable elements, these virus-like entities that have been remodeling our ancestral genome since the dawn of times," said Didier Trono, the study's senior author, in a press release from the École Polytechnique.  "Our findings also suggest possible pathogenic mechanisms for diseases such as amyotrophic lateral sclerosis or other neurodegenerative or neurodevelopmental disorders, providing leads for the prevention or treatment of these problems."

Wouldn't Barbara McClintock be thrilled to see where her discovery has gone?  From an obscure and much-doubted mechanism initially thought to be active only in maize, genetic transposition has been found in every organism studied.  And its effects are far from minor.  The same process that gives Indian corn its bright colors is the one that has given us brains powerful enough to figure it out -- a lovely circularity that I think McClintock would have found fitting.

As she herself said, in her usual understated fashion: "If you know you are on the right track, if you have this inner knowledge, then nobody can turn you off... no matter what they say."