Given my near-obsessive interest in extraterrestrial life, I suppose it was inevitable that I've now been sent links to the latest research on Venus over a dozen times.

The gist, in case you haven't read about it yet, is that astronomers have identified the absorption spectrum of a rare molecule -- phosphine -- in the upper atmosphere of the planet Venus.  Phosphine is produced in vanishingly small quantities on Earth by cloud-to-ground lightning strikes and volcanic eruptions, but the amount detected in the atmosphere of Venus is a full ten thousand times too high to be accounted for by any known inorganic chemistry or geology.

Ruling out one by one all of the inorganic sources of phosphine seems to leave only one remaining possibility; there are microbes in the Venusian atmosphere that produce the stuff.  There are a handful of species of terrestrial microbes that produce phosphine (here, it's in even smaller quantities than the inorganic sources).  But if these microbes (or something like them) existed on Venus, it could easily account for the excess.

You may be wondering how anything lives on Venus.  It's a good question.  The surface of Venus is a lot like our conception of hell.  For a long time people interpreted the constant cloud layers that obscure the surface as being made of water droplets, like they are on Earth; it led to some pretty cool speculative fiction about what could be down there (C. S. Lewis's novel Perelandra and H. P. Lovecraft's outstanding short story "In the Walls of Eryx" come to mind).  But that speculation was based on nothing but an absence of evidence.  As Carl Sagan put it so eloquently:

The chain of reasoning goes something like this: I can't see a thing on the surface of Venus.  Why not?  Because it's covered with a dense layer of clouds.  Well, what are clouds made of?  Water, of course.  Therefore, Venus must have an awful lot of water on it.  Therefore, the surface must be wet.  Well, if the surface is wet, it's probably a swamp.  If there's a swamp, there's ferns.  If there's ferns, maybe there's even dinosaurs.

This whole thing got shot down pretty conclusively in the 1960s when the first unmanned (fortunately) probes to Venus dropped through the atmosphere and promptly were simultaneously crushed and fried by an atmosphere with ninety times the pressure of Earth's atmosphere at sea level and temperatures that hover around 460 C.  Further exploration showed that the clouds are largely sulfuric acid, and the atmosphere is 96.5% carbon dioxide (compared to 0.04% on Earth), leading to a runaway greenhouse effect. 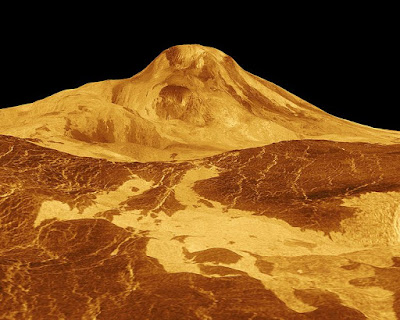 It's not just hot, it's wracked with turbulence the likes of which we never see on Earth.  The heat provides a huge energy source for Venusian weather, mostly in the form of violent storms and updrafts.  As dubious as he was about life on Venus, Sagan had suggested these updrafts as a key to the possible terraforming of the planet, and proposed launching rockets with payloads of blue-green bacteria spores, set to detonate in the upper clouds.  As the spores fall through the relatively mild temperatures of the upper atmosphere, they begin to photosynthesize, using up some of the carbon dioxide.  Enough are kept aloft by the updrafts to keep the process going, and ultimately, the greenhouse effect would diminish and the temperature would fall to more tolerable levels.

Well, nature may have anticipated Sagan.  If there are anaerobic microbes riding the turbulence in Venus's upper atmosphere, it would be the first unequivocal example of extraterrestrial life ever found.  The scientists are being careful about overstating their conclusion, but even given the usual caution, the excitement is palpable.  "The non-biological production of phosphine on Venus is excluded by our current understanding of phosphine chemistry in rocky planets' atmospheres," said Leonardo Testi, astronomer with the Atacama Large Millimeter/submillimeter Array in Chile, one of the most sensitive telescopes in existence.  "Confirming the existence of life on Venus's atmosphere would be a major breakthrough for astrobiology; thus, it is essential to follow-up on this exciting result with theoretical and observational studies to exclude the possibility that phosphine on rocky planets may also have a chemical origin different than on Earth."

So it's premature to say "we've discovered extraterrestrial life," but this is the best candidate for it I can recall seeing, and in one of the most inhospitable spots in the Solar System.  If this is confirmed to be of biological origin, it gives a lot of support to the contention I've had all along -- that life will turn out to be common in the the universe.  It'd boost the enthusiasm for checking out other places in the Solar System that could host life (Jupiter's moon Europa and Saturn's moon Titan come to mind), because after all, if life can exist on Venus, it could exist damn near anywhere.

Still no dinosaurs, though.  None of Lewis's floating islands made of rafts of plants, either, nor Lovecraft's evil jewel-hunting reptilian natives.  But for now, it's good enough for me, as long as the astronomers don't find some kind of exotic Venusian chemistry that explains the gas's presence.

If the whole thing pans out, it really gives new meaning to Ian Malcolm's line from Jurassic Park, doesn't it?