I had an interesting, and rather revelatory, experience this summer.

One of my passions is running.  Well, to be more accurate, I like having run.  While I'm out there, slogging up the hills and dripping sweat, I am most frequently asking myself why the hell I do this, when it is clearly painful, exhausting, and generally unpleasant.  But afterward I always feel better, and every time I've raced I come home and signed up for more races.

As a friend of mine put it, it's a little like the guy who smacks his head on the wall because it feels so good when he stops.

In any case, in May I signed up for the One New York Challenge, a five-hundred-kilometer "virtual race" across New York, the proceeds from which were donated to COVID research.  We had from May 15 to August 31 to finish, and there was a leaderboard that was updated daily to keep track of everyone's submitted mileage and times, so you could see how you ranked against other participants.

Well, this is where the trouble started.  Because I'm not all that great at running -- I'll be up-front about that -- but I am insanely competitive.  So every day I'd enter my miles (I run an average five miles a day, pretty much without exception), then immediately log on to the leaderboard to see how -- or if -- my place had shifted.

I ended up finishing the race way ahead of the deadline, with over a month to spare, crossing the finish line in 827th place overall (out of 6,428 participants), and in 30th place (out of 151) in my age class. 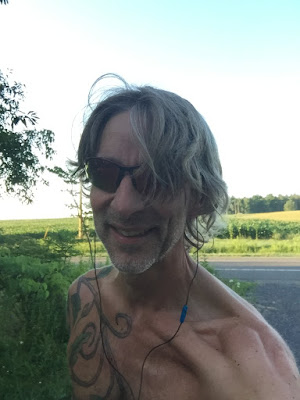 Me after finishing the 499th kilometer

So reason to be proud, right?  Not only finishing the race, but in the top fifteen percent out of everyone and in the top twenty percent in my age class.

But all I could focus on was thinking, "Holy shit.  826 people were faster than me."

Turns out I'm not alone in doing this, self-defeating as it is.  A study this week in the journal Social Psychology and Personality Science found that we feel much better about ourselves when we're big fish in a little pond than when we're little fish in a big pond -- even if our own skill level is the same in both situations.

In "Taking Social Comparison to the Extremes: The Huge-Fish-Tiny-Pond Effect in Self-Evaluations," by Ethan Zell and Tara Lesick of the University of North Carolina, we find out that we pay much closer attention to our in-group ranking (whatever the size and skill level of the group) than we do to how the whole group ranks against other groups.  Put a different way, most of us are much happier ranking higher amongst peers who as a whole are mediocre than ranking lower amongst the elite.

And doesn't just affect our emotional states, it affects how we actually evaluate our own skill level.  The setup of the experiment involved the administration of a verbal-reasoning test to students at a variety of colleges.  Participants were given their scores, and two other pieces of information; how they ranked against other participants from their own college, and how their college ranked against other colleges.  Afterward, each volunteer was asked how they felt about their performance, and to evaluate their own verbal-reasoning ability not just against their peers but in a general, global sense.

It makes sense, I suppose, given our long history of tribalism.  If Zog is competing against Thak in boulder-throwing, his rival's performance is right there in front of him, immediate and obvious.  It's way less obvious (and often much less important in the here-and-now) if Zog's whole tribe is made up of elite boulder-throwers or if, to put it bluntly, they suck.  I know it's always thin ice to attribute psychological tendencies to evolutionary history, but there's a good argument that the disappointment of the little-fish-big-pond experience is built into our brains by our having evolved living in small, tightly-knit groups.

In my own experience, being a mediocre racer in a very large group slowed me down for a bit, but (fortunately) hasn't stopped me.  Three weeks ago I started a new challenge; to run four hundred miles in 108 days.  (Five hundred kilometers -- 310 miles -- was apparently not enough, for some reason.)  It's for a good cause -- my sign-up money goes to the American Foundation for Suicide Prevention.  And there's swag to look forward to when I'm done, including another badly-needed race t-shirt, to add to the 793 race t-shirts I already own.

Time to get out running again and see if I can pass a few of these folks.